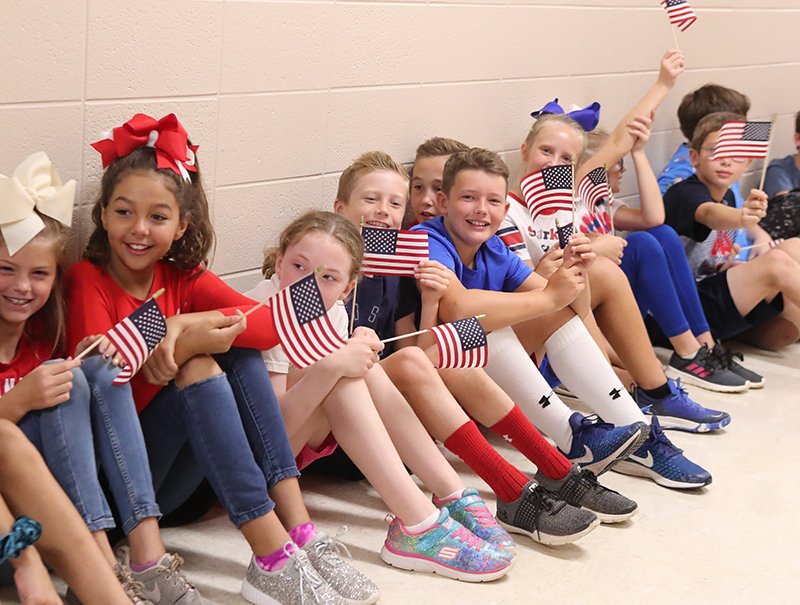 A group of Lakeside Middle School students wait for a choir performance during a Patriot Day event at the school Wednesday. - Photo by Richard Rasmussen of The Sentinel-Record

Schools across Garland County held ceremonies and events on Wednesday in honor of the victims of the terrorist attacks of Sept. 11, 2001, and paid homage to first responders and military personnel and the sacrifices they made.

At Lakeside Middle School, the fifth grade held its fourth annual flag retirement ceremony presided over by the John Percifull Chapter of the Daughters of the American Revolution. In the school's cafeteria, members stood on stage and inspected an old, tattered flag, which was deemed unserviceable.

The blue field of stars was first cut away from the flag, at which point "it is no longer considered a flag," Cindy Smith, immediate past regent, said. Members then cut each of the 13 stripes from the flag individually. As they did so, they explained how the stripes represented the 13 original colonies and presented trivia questions to the students over famous American quotes from figures such as Patrick Henry and Neil Armstrong.

"Nothing is really ended until it is forgotten. Our flag -- the symbol of freedom for over 260 million citizens of this great land, and the banner under which countless millions have given their last measure of devotion in wars to protect our freedom -- will never be forgotten. It is for us, the living, to love and respect our flag," Smith said during the ceremony. 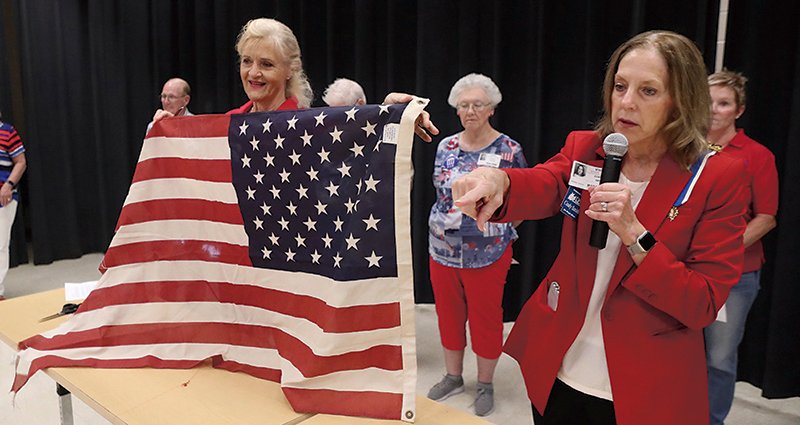 John Percifull Chapter of the Daughters of the American Revolution members Robin Williams, left, and Cindy Smith take part in a flag retirement ceremony during a Patriot Day event at the Lakeside Middle School Wednesday. - Photo by Richard Rasmussen of The Sentinel-Record

After the flag was cut, students were led outside, to where the pieces of the former flag were ceremonially burned. Led by DAR members, the students sang a rendition of the national anthem.

"This group has been, ever since we started coming, so attentive. It just gives me chills to see how attentive they are, how receptive they are. It's just really wonderful to see that they are so receptive to it," Smith said.

"I feel that if we don't share our history and our respect with these kids, they're not going to have it. They're going to lose it. And we have to pass it on or it will be gone. And we live in the greatest country in the world, no matter what anybody says, and it's important for them to realize we as adults feel that way." 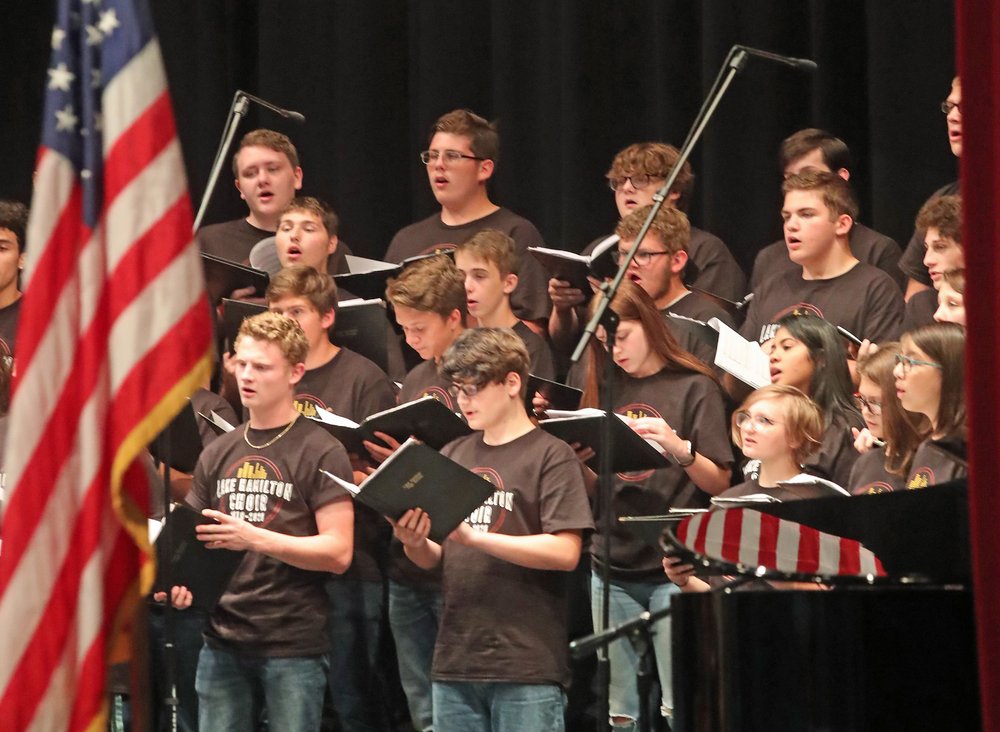 Members of the Lake Hamilton High School choir perform at a 9/11 remembrance ceremony at the school Wednesday. - Photo by Richard Rasmussen of The Sentinel-Record

Students then returned to the school's hallways, where they sat and received personal-sized flags donated by the DAR. The seventh-grade choir then delivered a rendition of "America the Beautiful." Following that, students were dismissed to their normal schedules.

Principal Jamie Preston thanked the DAR for their services, and said the presentation was especially important to that age group because "this group of kids was not alive when 9/11 happened," and that "seeing the dramatic effect of burning the flag helps the kids see just how much the event affected our country."

At Lake Hamilton High School, a 9/11 remembrance was held in the school's auditorium, where victims were honored, as well as local first responders.

Carter Manatt, senior student leader, told his classmates, "The United States has endured many trials. Yet few events have challenged resolve as the events of Sept. 11, 2001. On that fateful day, our faith was challenged but never lost. Our nation wept, but could not be defeated. Through the devastation, we emerged stronger. During these commemorative days, we may unite in prayer and remembrance and do our part to ensure that future generations never forget this immeasurable tragedy, or ever doubt the nation's extraordinary resilience."

A video compilation of news footage from the terrorist attacks of 9/11 was displayed along with a list of the names of the over 2,800 victims, during which the Lake Hamilton High School choir sang "America the Beautiful."

Faculty shared their memories and experiences from 9/11.

Debbie Hrvatin, quantitative literacy teacher, recalled being a college student at the time.

"At first, everybody was so afraid. But then, almost instantly, the patriotism that took over our nation, to me, was a beautiful thing," she said.

Javier Ibarra, special education paraprofessional and veteran, said he was deployed to Ali Al Salem Air Base in Kuwait when he heard the news. He detailed the profound effect it had on him and his fellow servicemen.

"Before Sept. 11, people had already been there multiple times. They were young. There wasn't a lot to do, and it was just hot, and they were wondering 'Why did I ever get into the military to serve? We were working six days a week, typically 12 hours a day," he said. 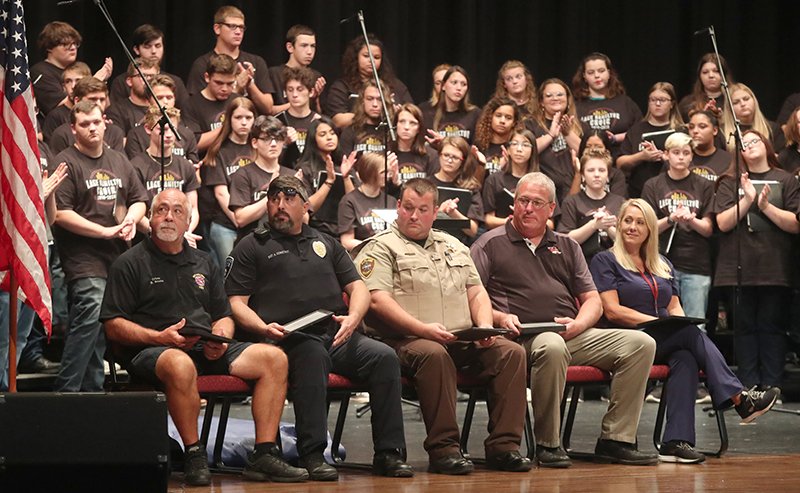 "A way that we can show our remembrance, that we honor those who lost their lives, that we honor those who ran into the building rather than running out. We honor the millions of people who gave blood, who participated in prayer vigils, who gathered to do for mankind before their self, a way we honor that is we give back. We have three things that are ours that we can only share through giving, and that's our time, our talent and our treasure," Principal Donald Westerman told the students.

"I'm going to challenge you today to see where you can give something of yourself to someone else, and do that giving as a way to honor and remember 9/11."

Other school observances and ceremonies included those at Hot Springs World Class High School, where a "full reflective 9/11 experience," consisting of eight stations, was created for students in the gymnasium, according to a news release. Each station was "dedicated to the history, events and implications of the Sept. 11, 2001, terrorist attacks," the release said. Computers, videos, photographs, recordings and other forms of media were used at the stations and a formal flag-raising ceremony was held.

Cutter Morning Star Elementary School and High School teachers discussed information, memories and reflections from Sept. 11 with students, who, in turn, talked about what they knew of the attack from their families.

"Our students view the September 9/11 tragedy as part of history, and not as a personal experience. Our teachers lived this experience. We remember where we were when we first heard of the planes flying into the World Trade Center. We wanted our students to realize what an impact that event has been on our lives," Terry Lawler, elementary and high school principal, said.