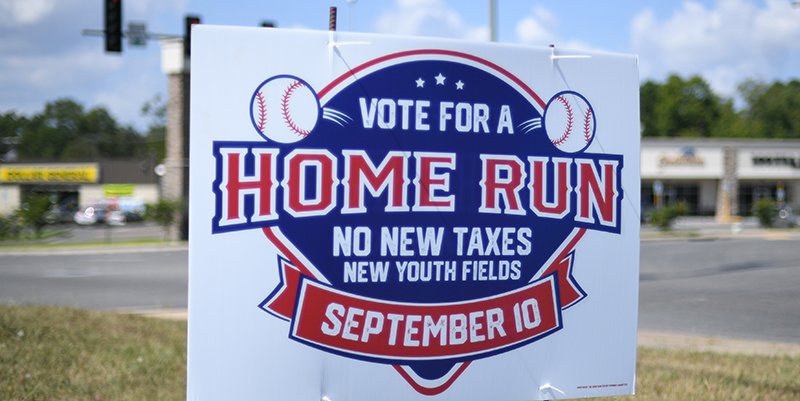 Voters approved Tuesday's ballot question 1,126-712 amid a lower turnout than Garland County Election Commission Chairman Gene Haley expected. Only 8.41 percent of the city's 21,892 registered voters weighed in on the decision to authorize the Hot Springs Board of Directors to issue up to $8.5 million in bonds on behalf of the Hot Springs Advertising and Promotion Commission to finance construction of a baseball complex at the former Boys & Girls Club of Hot Springs.

Just more than 6 percent of the 24,235 voters registered at city addresses last September voted in the museum election, which prevailed 1,003-523.

Haley said he expected Tuesday's ballot question to galvanize the city's anti-tax contingent. Many in the group viewed the measure as a pretext to insulate the 3 percent tax levied on prepared food and lodging inside the city from a repeal referendum. The electorate's endorsement of a ballot title pledging the tax proceeds to a long-term debt obligation essentially forecloses a potential repeal effort.

Haley said opponents of the measure did not organize as effectively as those in favor of it. The latter formed the Home Run for Hot Springs Committees that, according to financial reports filed with the Arkansas Ethics Commission, raised $20,000 from The Greater Hot Springs Chamber of Commerce and Hot Springs Fifty for the Future. Most of the money went to the advocacy campaign run by local advertising agency SixtyOne Celsius.

"I knew there were people for it," Haley said. "They were out holding signs. They had brochures, and they had a website. I thought the people against it would be more organized, but they weren't."

Haley said Tuesday's election broke a trend that's held true since the county acquired software that can track voter age and when voters check in at vote centers. The program groups voters into seven age categories. In previous elections, participation has been higher among older groups, but the program showed that voters 35 to 44 cast more ballots than those 46 to 55. The younger group cast 191 ballots compared to 170 for the older set.

Haley said the difference is likely a result of the 35-to-44 group having children who play baseball, as four youth fields will be built as part of the five-field Majestic Park complex.

Voters 55 and older accounted for three-fourths of the turnout, continuing the trend of voter participation skewing older. Voters 65 to 74 cast 614 votes, the most of any of the seven age groups. The 14 votes cast by voters 24 and younger were the fewest.

"You'd think the older people wouldn't have voted for this, because they don't have kids," Haley said. "They typically vote against taxes, but not in this case. On these elections, you're either for it, against it or you don't care, and I think a lot of people don't care. When less than 10 percent of the people decide how much tax you pay, it's disappointing."

Election day voters who cast ballots at the Election Commission Building on Ouachita Avenue approved the ballot question by a 197-96 margin. Voters who went to Creekside Community Church on Shady Grove Road endorsed it 128-61. Totals from four of 10 election day vote centers broke against the measure.

Election day voters supported the measure 568-347. Early voters favored it 555-356. County voters have been able to choose their election day voting location since the county transitioned from assigned polling places to vote centers prior to the 2016 preferential primaries and nonpartisan elections.