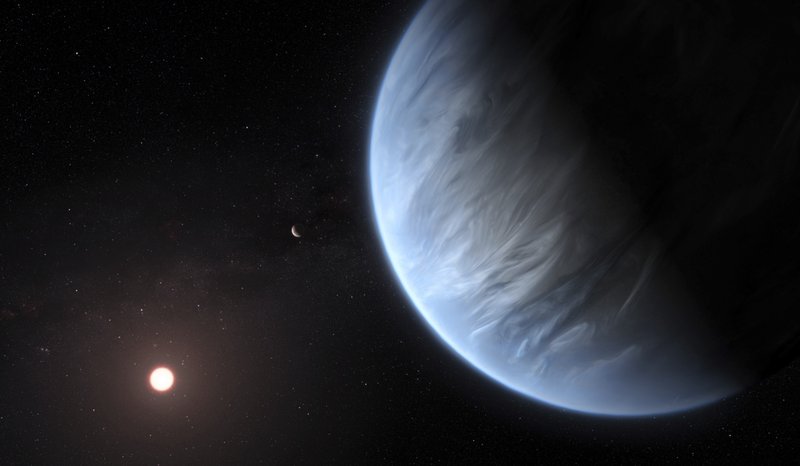 This artist's rendering provided by University College London Centre for Space Exochemistry Data researchers shows Exoplanet K2-18b, foreground, its host star and an accompanying planet in this system. On Wednesday, the scientists announced they discovered water on the planet outside our solar system that has temperatures suitable for life. (M. Kornmesser/ESA/Hubble via AP)

CAPE CANAVERAL, Fla. -- In a tantalizing first, scientists have discovered water at a planet outside our solar system that has temperatures suitable for life.

Two research groups announced this week that they've found water vapor in the atmosphere of a planet 110 light-years away in the constellation Leo. This so-called Super Earth is just the right distance from its star to conceivably harbor life.

It's the only exoplanet known so far to have both water and temperatures needed for life, the University College London team reported in the journal Nature Astronomy on Wednesday. But lead author Angelos Tsiaras stressed, "This is definitely not a second Earth."

Its star and atmosphere are so different than ours, "Earth-like conditions are not possible," Tsiaras told reporters. "The only question that we're trying to ask here, and we're pushing forward, is the question of habitability."

A Canadian-led team announced similar findings Tuesday. In a paper just submitted to the Astronomical Journal for publication, these scientists suggest it might even be raining there.

"This represents the biggest step yet taken toward our ultimate goal of finding life on other planets, of proving that we are not alone," the study's lead astronomer, Bjorn Benneke of the University of Montreal, said in a statement.

Discovered in 2015, the planet known as K2-18b is twice the size of Earth with eight times the mass. While it's thought to be rocky, no one knows if water's flowing on the surface. Its star, a red dwarf, is considerably smaller and cooler than our sun, a yellow dwarf, and its atmosphere is also different than ours.

The results are doubly exciting, Tsiaras noted, given this is not only the first Super Earth with water detected in its atmosphere but the planet also resides within the habitable zone of its star.