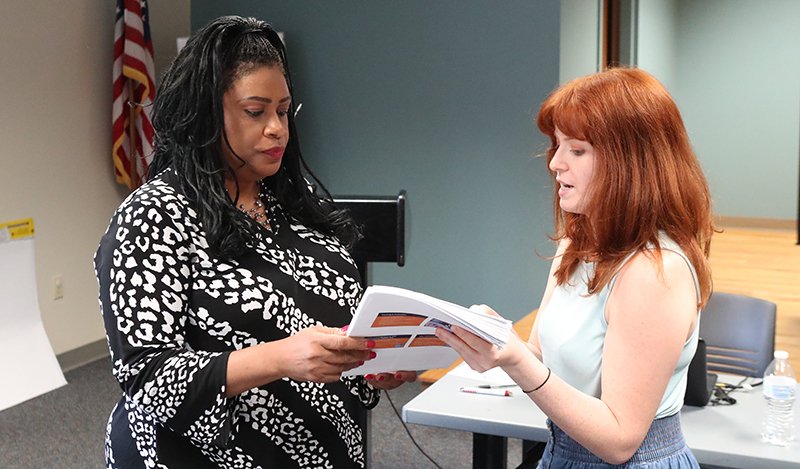 Esther Dixon, left, chairwoman of the Hot Springs Local Complete Count Committee, speaks with Arkansas Advocates for Children and Families Outreach Director Rebecca Zimmermann prior to a 2020 census outreach training session at the Garland County Library on Friday. - Photo by Richard Rasmussen of The Sentinel-Record

"This is the first of its kind, so each of you here today, we are making history," Esther Dixon, LCCC Committee chairwoman and District 3 justice of the peace, said Friday.

The committee is made up of representatives from local businesses, organizations, faith-based leaders, nonprofits, colleges, schools, neighborhood associations, outreach services and individuals.

"We're going to work together in a collaborative effort to make sure that Hot Springs has a complete count."

In Fiscal Year 2016, Arkansas received $9,867,323,057 through 55 federal spending programs guided by data derived from the 2010 census, including domestic financial assistance programs, tax credit programs and procurement programs, Dixon said. Information from census results is also used to determine voting boundaries and the number of congressional representatives afforded to each state.

"This has to be done every 10 years, and you live with it for the next 10 years, however it comes out. There's a lot of things it guarantees. It guarantees, of course, federal funding for areas. It also guarantees equal representation for areas," County Judge Darryl Mahoney said.

"This is something that we all have to do, and we all have to push as hard as we can do to get it done because the next 10 years are going to be huge for Hot Springs and Garland County. The growth and the ability to grow will hinge on this."

Mayor Pat McCabe emphasized the importance of the census in relation to economic growth.

"This is a tool that our Chamber of a Commerce and our Hot Springs Metro Partnership uses, and it's a tool that an industry uses when they're trying to evaluate a community's readiness to accept them into their community, whether it be by population, commerce or workforce readiness. All these questions that get asked through the census and are taken every 10 years or so, live with you," he said.

"We have to get counted, and if we don't count, just remember, other communities are counting. So, to the degree that we are supposed to get a certain slice of a pie, if they count and we don't count right, our slice is materially smaller, and theirs becomes materially bigger. So all we want is our slice to be what it's supposed to be and no undercount."

Rebecca Zimmermann, Arkansas Advocates for Children and Families Outreach director, talked about updates to the census and census-taking barriers faced by certain populations.

"This will be the first time the census has ever been done online, and it will largely be done online. In mid-March, we will receive a postcard in the mail with a unique identifier number that they can go onto the Census Bureau's website and complete the census using that number," she said.

She said if the census is not completed online, a household will still receive a traditional paper form in the mail. If that is not completed in the allotted time, a census enumerator will go door to door to ensure the form is completed. Alternately, the census can be completed via phone with a call to the U.S. Census Bureau, where there will be 13 language options.

While Zimmermann said the option of taking the census online will make it more accessible to many, it could hinder others.

"Traditionally, one of the best-counted populations is older adults. But if you think about computer literacy and things like that, that might make it a big challenge that hasn't been a challenge to count that population," she said.

She listed other "hard to count" populations, including children younger than 5 years old, people of color, individuals who often change residences, the disabled, homeless, members of the LGBTQ community and those who harbor a distrust of the federal government.

Certain geographical areas of Arkansas are also considered "hard to count," she said, including the Delta area, southern Arkansas, pockets in north-central Arkansas and a small portion of Pulaski County. In total, over 600,000 people live in "hard to count areas," she said.

"Wherever someone is living on April 1, is where they should be counted, even if it's just a temporary, three-month situation or something," Zimmermann said, noting this information is vital to getting a complete count.

Some of the barriers to taking the census that people face include apathy toward the results, confidentiality and privacy concerns, lack of internet access, transportation issues, fear of repercussions if they answer truthfully and a lack of knowledge about the benefits of the census, she said.

She clarified that citizenship status will not be a question on the 2020 census and that regardless of status, individuals should be counted and included in the census.

To combat these challenges, Zimmermann suggested involving trusted leaders within each demographic of a community in the census.

"People are more likely to open the door and answer questions if someone they know, if someone from their community is knocking on the door," she said.