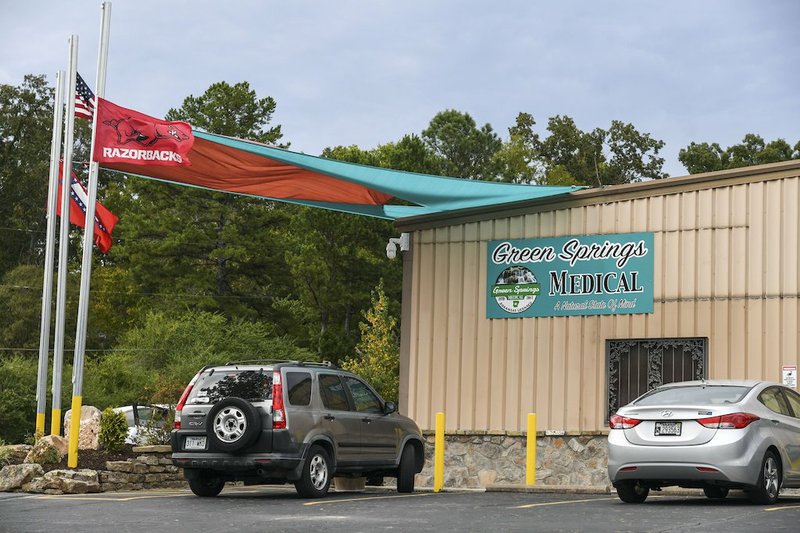 Green Springs Medical, one of two medical marijuana dispensaries operating in Garland County. - Photo by Grace Brown of The Sentinel-Record

The dispensaries were the first of 32 licensed statewide to legally sell marijuana in Arkansas. Their combined sales since opening in May have accounted for a large percentage of sales statewide.

Settlement offers the state-issued earlier this week listed numerous infractions. In addition to 47 counts of improper labeling and failure to maintain video surveillance systems, Green Springs was cited for failing to maintain biometric locks, not restricting access to areas where marijuana is stored and displaying banners outside the dispensary.

The settlement offer proposed a $13,500 fine, with $5,875 suspended upon successful completion of a 180-day probation period. The state said Green Springs had not formally responded to the offer as of Thursday morning. It has until Oct. 1 to accept it or request a hearing. The state can assess fines of up to $5,000 per violation.

Doctor's Orders accepted its settlement offer and paid a $3,550 fine, the state said. The offer included a 180-day probation period. It was charged with improper packaging and storage, improper labeling, changing operational plans without prior notification, failing to post signage for limited access areas, failing to restrict access to those areas and not having a video surveillance system in areas where marijuana is stored.

According to Drennan's application, he owns a 24.5 percent stake in the BOLD Team cultivation facility in Cotton Plant. The grow operation was the first in the state to sell marijuana to dispensaries. Drennan listed an El Paso address as his residence. He owns the dispensary under M.D. Medicinals LLC, which he registered earlier this month.

A lawsuit filed Sept. 9 in Garland County circuit court involving Green Springs' owners alleged the dispensary has "systematically and continuously" violated state rules and regulations. Co-owner Bruce Simpson is suing Dragan Vicentic, who, according to the company's application for license, owns a majority interest in the dispensary as CEO and chairman of the board.

Simpson, listed as security manager/vice chairman, owns 40 percent. His complaint claimed Vicentic has not distributed profits according to the ownership percentages listed on the application and has banned him from the premises. Vicentic told The Sentinel-Record last week that Simpson did not fulfill the obligations expected of him, and that they had mutually agreed to end their partnership.

Vicentic could not be reached for comment Thursday on violations found during the July inspection. DFA Director of Communications Scott Hardin said Thursday both local dispensaries were examined as part of a standard compliance inspection and not in response to a complaint.

Violations were also issued this week to Fiddler's Green dispensary in Mountain View. Eight of 32 licensed dispensaries are in operation.