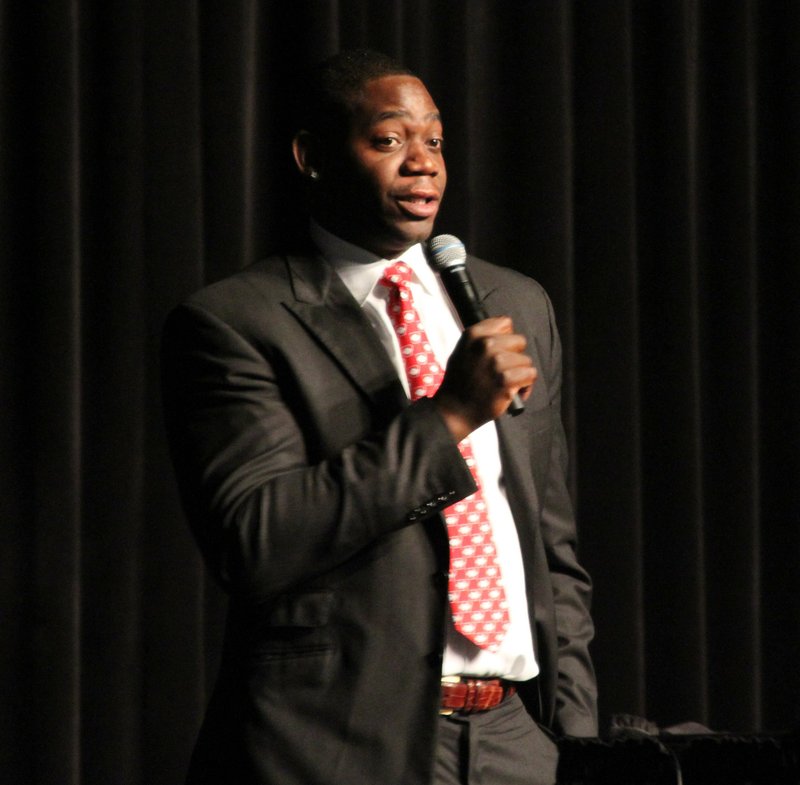 Former Razorback and NBA player turned educator Ronnie Brewer Jr. took the stage Tuesday to explain the magnitude of the impact teachers have on students and his own life at the annual Education Innovation Summit.

Brewer played collegiately at the University of Arkansas, the alma mater of his father, Ronnie Brewer Sr. He was the 14th pick in the 2006 NBA draft by the Utah Jazz. During his career, Brewer also played for the Memphis Grizzlies, the Chicago Bulls, New York Knicks, Oklahoma City Thunder and Houston Rockets. He most recently played for the Santa Cruz Warriors of the NBA Development League.

Brewer said if it were not for his high school teachers at Fayetteville he would have never majored in journalism in college and consequently would not be prepared for his current roles.

"That's something they really influenced in my life," he said, noting the U of A educators continued to impact his life.

Brewer gave special credit to professor Gordon Morgan and told one of his favorite anecdotes about his mentor, which elicited a bit of laughter from the audience.

Brewer said it did not take long for his coach to hear about the conversation.

"Our head coach, he came to class with me one day. He was like 'Hey, Dr. Morgan. I need you to stop telling that to the class. We need Ronnie on the basketball court to get some wins.'"

Brewer laughed, and said "Dr. Morgan was a huge influence in my life. He's a really good professor and really molded me."

Though his professors did influence him, Brewer only studied at college for three years and left to join the NBA without graduating.

He discussed the impact that Boys & Girls Clubs have had on his life, and his attempts "to give back" with the Ronnie Brewer Foundation through school supplies, scholarships, basketball camps, mentorships and more.

Brewer ended his remarks with the memory of a high school English teacher that had been influential in his life.

"I'm just thinking about the impact that she was able to have. You know, our impact is never understood at the moment that we're having."