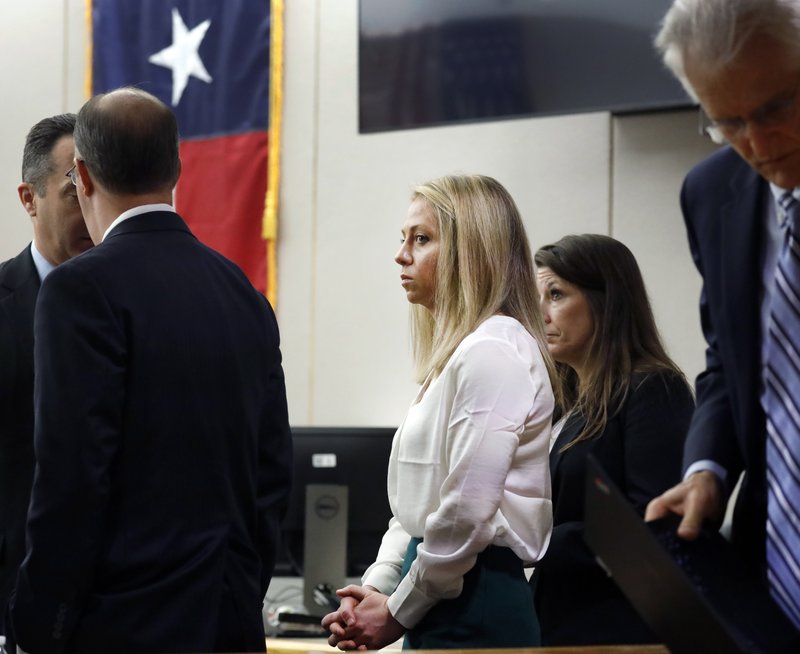 Former Dallas police officer Amber Guyger, center, appears at the Frank Crowley Courts Building in Dallas on Saturday. Guyger shot and killed Botham Jean, an unarmed 26-year-old neighbor in his own apartment last year. She said she mistook his fourth-floor apartment for her own. - Tom Fox/The Dallas Morning News via AP, Pool

DALLAS -- The jury deciding the fate of a former Dallas police officer who shot and killed her unarmed black neighbor heard around five minutes of testimony on day six of the trial before being sent home.

Amber Guyger, 31, who is white, is on trial for murder after she fatally shot 26-year-old Harding University graduate Botham Jean, an accountant who was alone in his apartment when she came through his front door thinking it was her own.

On Saturday, before the jury was seated, former Dallas police chief Craig Miller was called by the defense as an expert witness to testify about temporary condition called "inattentional blindness," which he said is not universally accepted in the scientific community.

He said he thought Guyger was justified in shooting Jean, based on "the totality of the evidence." The judge ordered that he wouldn't be allowed to say that in front of a jury, but will allow him to testify to a narrow range of issues related to officer distraction.

On Friday, Guyger testified that she mistook Jean's fourth-floor apartment for her own, which is one floor below. She said she parked on the wrong level of the apartment complex, and walked into the unlocked door thinking it was her own. She says she killed Jean in self-defense, mistakenly thinking he was a burglar in her apartment who would harm her.

The jury will consider whether Guyger is guilty of murder, a lesser crime such as manslaughter or criminally negligent homicide, or if she is not guilty.

On Saturday, they heard again from David Armstrong of the Texas Department of Public Safety, for about five minutes. He said that she may not have had a normal perception in the tense situation.

As with Miller, Armstrong told lawyers that he believed Guyger's actions were reasonable, but the jury was not present.

Jurors will report back to the court on Monday at 9:30 a.m.