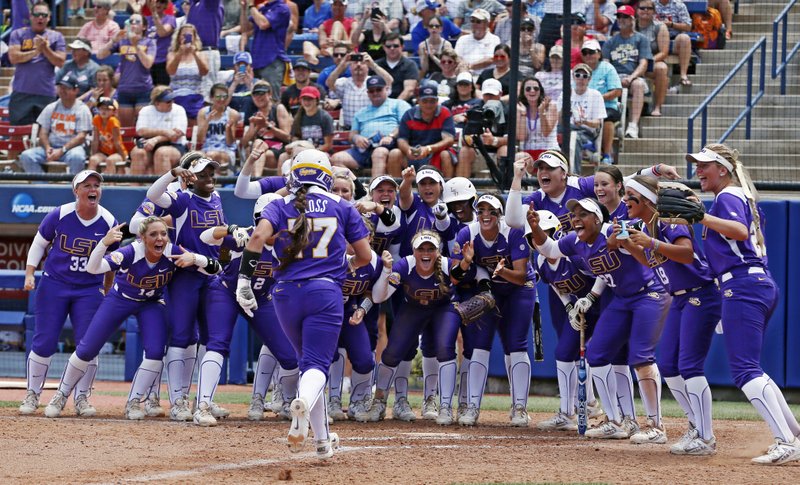 LSU's Kellsi Kloss runs towards home plate where her teammates cheer for her following her home run in the third inning of a May 28, 2015, game against Auburn in the NCAA Women's College World Series in Oklahoma City. LSU won 6-1. To accommodate what were expected to be record crowds, USA Softball Hall of Fame Stadium underwent a 4,000-seat expansion that raised its capacity to about 13,000. All the new seats were already sold out. Turns out, they won't be needed this year. - Photo by Sue Ogrocki of The Associated Press

Storms near USA Softball Hall of Fame Stadium had knocked out the right field lights during the May 31 evening session of the Women's College World Series that set an attendance record for the annual event.

Baker, who was running the audio board that night, plugged the system into a battery backup. As fans turned on their cellphone flashlights during the delay, Baker played "Lights Shine Bright" by TobyMac featuring Hollyn. And when the lights came back on, Baker's fitting song choice was "The Power," a 1990 hit by Snap!

Baker won't get to energize the crowd this year. The pandemic has virtually shut down sports, including NCAA championships like the WCWS and the College World Series.

Economies have been hard hit and The Associated Press is examining the ripple effects of losing a showcase event in smaller cities and communities like Oklahoma City, which boasts a pro team in the NBA's Thunder.

Volunteers and vendors aren't needed. Family traditions will be paused. The annual boost the economy receives in late May and early June won't come.

The timing was especially unfortunate. Everything was in place for a grand softball celebration. Oklahoma City was set to host for the 30th time. A stadium expansion added 4,000 permanent seats to bring capacity at USA Softball Hall of Fame Stadium to about 13,000, and city officials said all the new seats were sold out.

JJ Kuhn, operating partner of Yucatan Taco Stand in the Bricktown section of downtown Oklahoma City, said sporting events such as the WCWS and the NBA playoffs have been a way the city shows itself to the world.

"Sports is one of those ways that we have been able to progress," Kuhn said. "We like to think of ourselves as a big-league city now, and that's the mechanism that we've used to do that. Obviously, college sports in Oklahoma -- we love that. It's our bread and butter. Having those national events where we can present ourselves -- to have those missing, it's going to hurt."

With softball set to return to the Olympics for the first time since 2008, Oklahoma City was primed to take advantage of the extra attention on the sport. Now the Tokyo Olympics are pushed back a year, to 2021, and Craig Cress, executive director of USA Softball, is dealing with "a moving target."

"We were ready to open with all the bells and whistles," Cress said. "The large things are definitely there. The seats are there. We were on schedule to be full blown and have a great series."

Oklahoma City Mayor David Holt said in the end, it's about public safety.

"We greatly prize this event for its economic impact and we love the brand, and we're very proud to be the home of the women's softball College World Series," Holt said. "But there's no question this was ultimately the right thing to do."

The Women's College World Series has been hosted in Oklahoma City every year except one since 1990. Gina Janzen, who has attended over the years with her daughter, Kylie, won't get that chance this year. Kylie signed to play Division II softball for Oklahoma Christian in February, in part because the players she watched while growing up motivated her.

"It's such a huge loss," Gina Janzen said. "You mourn it a little, but you also understand the gravity of what's going on in the world and why you can't have these things."

The Oklahoma City Convention and Visitors Bureau estimated the city pulled in $14.4 million from the WCWS last year. This year's projection ranged between $23.6 million and $27 million.

Sue Hollenbeck, director of sports business for the bureau, said the Bricktown neightborhood will take the biggest hit without fans coming for the championship over the better part of a week.

"They'd eat at all the restaurants, go to the bars, get on the water taxi, do the shopping," she said. "Anything and everything they could do, they would do when they weren't at the stadium."

David Southard, owner of Jazmo'z Bourbon Street Cafe, said his Bricktown restaurant with 70 employees is closed. He said the WCWS has been good for business for the past 20 years but it won't be part of his plans to reopen this spring.

"It brings a lot of people in from all over the country," he said. "The hotels are full. Often, we get reservations for large groups, two hours before they come, and it's 20 people."

Oklahoma City has come through challenges before, including the deadly bombing of the Alfred P. Murrah Federal Building in 1995. Holt said the city went all out in 1996 to make sure events were special.

"People who were around back then will tell you that the return events were some of the favorites of the whole history," Holt said. "There's just a higher level of joy than ever when they come back. So we have that to look forward to next year."