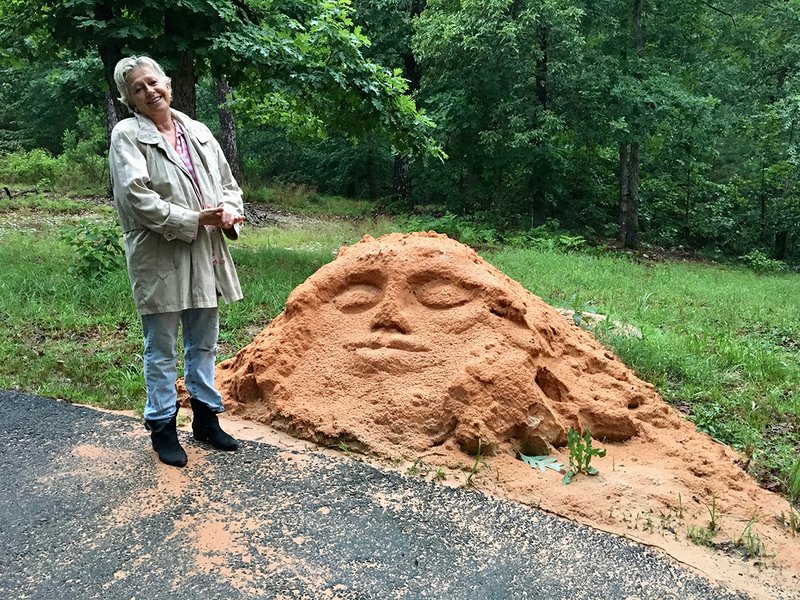 "Even if people haven't had the chance to travel, and they think that they're stuck here, I would tell them, from a Master Naturalist's point of view, they are in one of the most miraculous places on earth. They could really learn to appreciate where they are," says Diamond Lakes Arkansas Master Naturalist Joann Saraydarian

"And that's the secret in life, gratitude, and appreciation for wherever you are. If you have that, suddenly, it opens yourself up to the treasures. That's the key that unlocks the joy of life, gratitude."

The Minnesotan transplant's unique philosophy and approach to the world led her to the Spa City seven years ago, seeking a return to her roots and a more sustainable way of living. Now one of Arkansas' certified Master Naturalists, Saraydarian uses her knowledge of the local flora and fauna to show the planet her gratitude and educate the public on how they can keep the Natural State in its natural state.

Growing up, she spent time with her family at their home in Wisconsin, learning how to appreciate the beauty of nature and all it offers. As one of eight children, Saraydarian says her parents would take regular hikes and forage for wild asparagus with the family. Although poor, Saraydarian says she never noticed "because (they) had so much love and so much sharing of beauty and fun things."

However, her environment abruptly shifted when she became an orphan at 14 years old. Saraydarian moved to Hollywood, Calif., and from there, she says she "was on (her) own pretty early in life."

"Well, my background is, it's like several lifetimes. They have so many chapters," she said.

"I had my apartment in high school. Then I went to college, and I majored in psychology and art. Then I worked in the film industry in Hollywood for a while. From there, I moved to Sedona, Ariz. and I had an art school and a graphic design business. ... I was counseling and lecturing throughout the U.S. and some and sometimes in Europe."

When Saraydarian's husband died and her "wonderful marriage" of 25 years ended, she found herself seeking another new chapter in life. Saraydarian moved to Houston and quickly began advocating for youths in the inner city. She spent much of her time "in the hood," trying to find the pulse of the youths so she could determine how to meet their needs from a counseling standpoint.

"I needed to get out of the country setting because it was difficult, you know, to get over. But it's interesting, in my life, every time something so-called tragic, like a crisis happens, doors of opportunity open for me," she said. "My life, looking at it, could seem very difficult, but to me, I feel like I have had the luckiest life and the most beautiful life ever. I mean, I am so grateful for everything that has happened in my life.

"One of the things I've been so grateful for is wherever moved to Houston. I did a lot of world traveling, and as I look back now, I can see it was to find someone to share my life with for the rest of my life. And fortune would have it; I found Kai (Coggin)."

Saraydarian and her partner spent time together in Houston, enriching their community from within. Their dedication and passion for reaching youths brought them closer together, and the pair eventually decided to retreat to the country for a more organic experience.

"My early childhood was just filled with the beauty of nature," Saraydarian said. And well, you know, they say you can take someone out of the country, but you can't take the country out of them. And so I looked for the most beautiful place to find; the purest.

"And I visited Hot Springs, and I said, 'this is it.' And fortunately, Kai was so also so enthused about it. And so was my nephew, my best friend who I helped raise while his mother was getting her degrees. He came with his fiancee, so the four of us trekked forth and came to Hot Springs and started a completely new life and focused around nature."

According to their website, Arkansas Master Naturalists focus on being "volunteer educators, citizen scientists, and stewards of the environment striving to protect and preserve Arkansas' natural beauty." Throughout the year, they hold several hands-on courses, maintain several ongoing projects in the community, like the butterfly garden located along the Hot Springs Creek Greenway Trail, and assist in surveys and research involving the environment.

"The other beautiful thing that the Master Naturalists have taught me, and what they have in their program in their education, is it's not just learning, but it's giving back. We have lots of programs on how to help the children, how to put programs on for children, and how to volunteer for things.

"I thought I really knew a lot about nature. Now I know less than I ever had. It seems like the more you know, the less you know because there are so many falsities that we learn. It's amazing," she said.

Seeing how little she knew shifted Saraydarian's paradigm and opened her up to a wealth of knowledge waiting to be uncovered. That knowledge helped her and her partner turn their acreage into a wildlife preserve. They created an entire self-sustaining ecosystem on the property, where each plant and animal serves a purpose and complements surrounding organisms. Everything from the rich garden beds that fill plates on the dinner table to radiant flora that attracts charms of hummingbirds in the spring, Saraydarian meticulously orchestrated it all.

The carefully composed chateau attracts all types of creatures, from foxes to frogs. However, Saraydarian says there is a particular charm of hummingbirds that visits like clockwork each spring.

"Now here's the cool thing, if you really want to, you know, create like a habitat for the birds, they need to know that it's safe to hang out," she said. They won't give birth to their young unless they see that there's a steady supply (of food) there that can get them through. So you toss out a few seats here and there, but the birds are like, 'Man, this is just for now.' They're smart. They're like, 'A person is always leaving, you know?'

"Well, one year when I found that out, the results were immediate. I had over 100 hummingbirds. They were divebombing around me, so close that they would come right up to me and show their gratitude."

The ratio is one cup of sugar to four cups of water. The sugar must be blended to a fine powder and mixed in with the water. It is also crucial that the container is cleaned on a regular basis, Saraydarian said.

In learning more about the world around her, Saraydarian also began learning even more about herself. She says her time spent in nature has caused her to become more responsible and take less for granted.

"It expanded my compassion and sensitivity to nature. It had just brought so much understanding about what the needs are that nature has and their suffering. I mean, we are in the midst of a mass extinction; the sixth extinction in the world, first killing off dinosaurs and such. This is called the human era," she said.

"We're killing everything. People think, 'Oh, it's just some chemicals on my grass.' But don't you know when it rains it goes to the gutter and then when the gutter it goes to the pond? Or your little dog rolling in it then comes in and licks its paws? Or you have your children playing it, and they touch their faces? But people don't see it. ... And it's all connected."

For the time-being, Saraydarian has self-quarantined within the confines of the wildlife preserve she and her partner call home. Although her routine is having to adjust to this new-normal amid a pandemic, Saraydarian said the hummingbirds have arrived right on time.

For more information about the Arkansas Master Naturalist, visit https://arkansasmasternaturalists.org/.