Business owners left out as lending program goes on hold 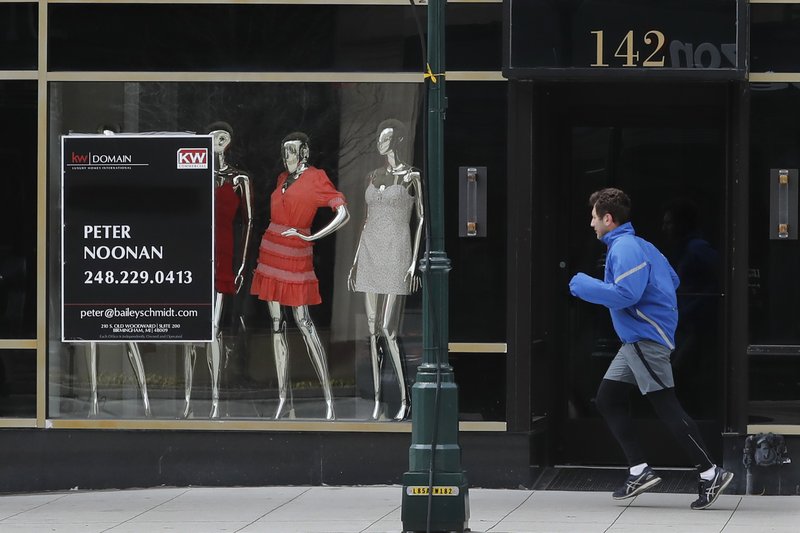 A jogger runs past Rococo, a clothing store, Thursday, April 16, 2020, in Birmingham, Mich. The government's lending program for small businesses is on hold. The Small Business Administration said Thursday that it reached the $349 billion lending limit for the program, after approving nearly 1.7 million loans. (AP Photo/Carlos Osorio)

The Small Business Administration said Thursday that it reached the $349 billion lending limit for the program, after approving nearly 1.7 million loans.

Thousands of small business owners whose loans have not yet been processed must now look to Congress to approve a Trump administration request for another $250 billion for the program. Lawmakers have been haggling over whether to extend the program as it stands now, or add provisions that, among other things, would help minority businesses. It's unclear when they might reach an agreement that would allow loan approvals to continue.

Business owners left in limbo were getting more anxious after hearing the program was on hold.

"I am very worried that I will be shut out," said Shana Elson, owner of Top This Chocolate, a retailer in Ventura, California. She applied for a loan on April 3, the first day of the program, but hasn't heard back from her bank.

Meanwhile, thousands of other businesses are still applying, hoping to get loans when the program is extended.

The fight in Congress over the extension is along party lines. Republicans are amping up the political pressure in hopes of getting a relatively narrowly drawn infusion of $250 billion in funding into the program. Top Democrats are seeking to add funding for hospitals and state and local governments.

Matters have been complicated by the shuttering of the Capitol other than for pro forma sessions that require unanimous agreement in order for any legislation to advance. The sums are unlike anything that has passed under conditions requiring such unanimous consent -- a wholly unprecedented situation that has scrambled the power dynamics inside the Capitol.

Democrats like House Speaker Nancy Pelosi of California are also seeking to add provisions that among other things would help minority businesses.

With the stalemate, the business payroll subsidy program likely won't get funding until next week at the earliest.

Although the halt to the program is expected to be temporary, it is another frustration for small business owners.

The number of approved loans is more than 30 times what the SBA processes in a year. The crush of applications caused technological problems at the SBA and a backlog at banks. However, many owners also faced bank requirements that excluded even long-time customers. Many of those who could apply received little or no information about the status of their applications.

"I am annoyed at how poorly executed this process has been," said Ashley Hunter, managing director of HM Risk Group, an insurance underwriter based in Austin, Texas. She said her bank has not contacted her about her application.

A further frustration is that some banks still weren't set up to take any applications even though the program started nearly two weeks ago. Comerica Bank said it will email customers when its website is ready to accept applications.

Many owners are juggling applications while trying to keep their businesses afloat in the midst of a crisis.

"I'm trying to do everything I can and am filling out paperwork. I'm looking to my accountant to help because I'm actually stuck here quite a bit, working," said Steve Babiak, owner of Benny's Bakery in Saline, Michigan.

The loans, based on a company's payroll costs, offer owners forgiveness if they retain workers or rehire those who have been laid off. The law provides for forgiveness for companies in any industry -- even businesses like hedge funds and law firms. However, there's a limit of $100,000 on the amount of employees' compensation that can be considered when loan forgiveness is calculated.

While they wait, owners who are shut down or who've lost revenue are uneasy about the impact the virus outbreak will have on their companies.

"Without knowing how long this downturn will last, the loan would have helped us ease the burden for the long term," said Jordan Gurrieri, co-founder of Blue Label Labs, an app developer based in New York. His company applied to a large bank on April 6; he plans to apply to a smaller one when the program reopens.