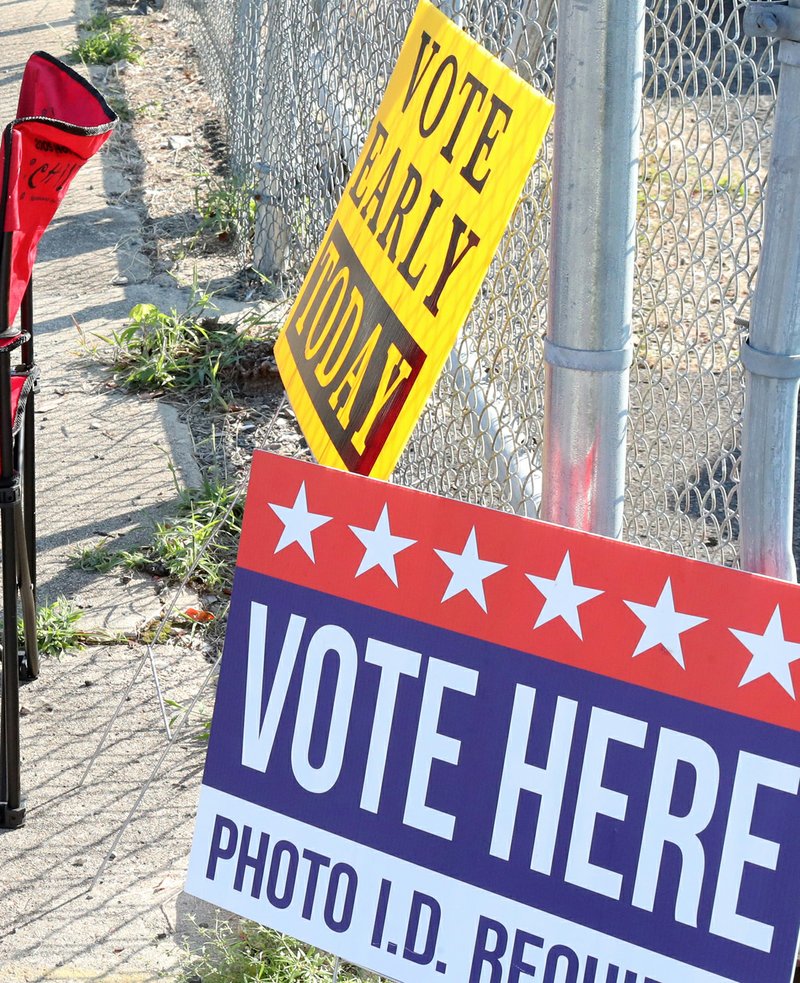 File photo of early voting by The Sentinel-Record.

The possibility of the coronavirus pandemic disrupting in-person voting in the November general election has raised the profile of voting by mail, but state lawmakers rejected a provision to expand the practice earlier this month.

Temporary language Sen. Joyce Elliot, D-District 31, of Little Rock, proposed including in the secretary of state's budget appropriation for the fiscal year beginning July 1 would have allowed no-excuse absentee voting in the November election, permitting any registered voter to vote absentee.

The law limits absentee voting to electors who are unavoidably absent or unable to vote in person because of illness or physical disability.

The amendment fell 15 votes short of the 29 needed to advance out of the Legislature's Joint Budget Committee, with several lawmakers questioning the necessity of the legislative branch addressing an issue they said the executive was better positioned to handle.

They referenced the executive order Gov. Asa Hutchinson issued last month suspending restrictions on absentee eligibility in the March 31 runoff for preferential primaries and school board elections, noting the governor could reinstitute the suspension ahead of the November election.

Sen. Alan Clark, R-District 13, of Lonsdale, voted against the amendment, explaining that eligibility restrictions could be suspended by a subsequent executive order or addressed in a special legislative session. His district includes parts of Garland, Grant and Saline counties.

"I don't know if anybody's ever been turned down for an absentee ballot if they've applied for one," Clark said. "There could be a special session, and we've already confirmed the governor has the authority to make some changes if need be."

The Garland County clerk's office said it has only denied absentee ballot requests when applications are incomplete. Applications that don't meet requirements are returned to applicants, it said. Absentee voting accounted for more than a third of the 402 votes cast in the March 31 runoff for Position 4 on the Lakeside School Board.

Clark said a voting by mail system similar to those used by other states increases opportunities for election fraud.

"The easier you make it to cheat, the more cheating there will be," he said. "You can put me down as dead set against mail-in voting. If we needed to make any changes as we get to the fall on absentee voting we can. (The amendment) was not the right measure. I've never seen anyone turned down who sent in an application for an absentee ballot."

Clark said voting by mail could lead to voters filling out ballots in groups, perhaps under coercion of employers or religious institutions supporting certain candidates or ballot measures.

"If you can get a group of people together and control how they vote, it's a mistake," he said. "There's a reason why you go in and vote in the voting booth by yourself unless you've got some kind of health problem. That's the way it should be."

Allegations of absentee voter fraud SBEC has investigated since 2014 included a St. Francis County long term care facility. According to complaints and letters provided by SBEC, absentee ballots for residents of a Forrest City nursing home were completed and filed illegally during the November 2014 election.

The commission referred the complaint to law enforcement, according to a letter SBEC provided.

Administrators of hospitals and long-term care residential facilities are exempt from the law that prohibits authorized bearers from having more than two absentee ballots in their possession. Authorized bearers can deliver absentee ballots and applications to county clerks for no more than two voters per election. But hospital and nursing homes administrators can for any facility residents who have authorized them to.