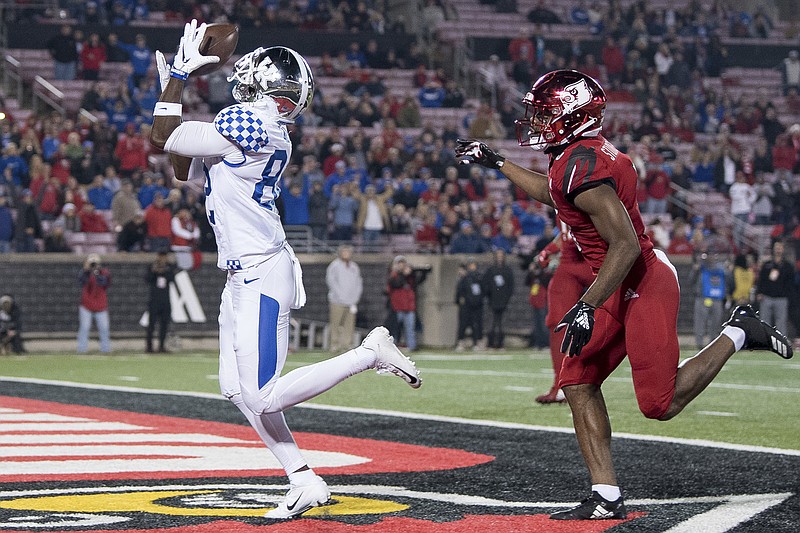 Kentucky wide receiver Josh Ali (82) catches a touchdown pass during the team's Nov. 24, 2018, NCAA game against Louisville in Louisville, Ky. The Southeastern Conference's conference-only scheduling decision during the coronavirus pandemic wiped out any hopes of saving four in-state rivalries against Atlantic Coast Conference opponents, all traditionally played on the final Saturday of the regular season. - Photo by Bryan Woolston of The Associated Press

If college football somehow makes it to the field, all we'll get is a shell of a season.

Fewer games. Conference bubbles. A limited number of fans in the stadiums -- or maybe none at all.

Is it really worth risking the health of players, coaches and boosters for this?

The mighty Southeastern Conference, which has produced 10 of the last 14 national champions, delivered the grimmest signal Thursday that this will be a season like no other, if there's actually a season amid a raging pandemic that shows no signs of fading away.

Following drastic moves already instituted by the Big Ten, Pac-12 and Atlantic Coast Conference, the SEC announced a 10-game, conference-only schedule that won't begin until late September. The Big 12 will likely have to follow suit, despite making an aggressive push to play a full, 12-game schedule even as the pool of potential non-league opponents dries up.

The reduced, bubble-like schedules are effectively a Hail Mary to save a season that, frankly, may not be worth saving at this point.

"We're all hoping," was the best Georgia athletic director Greg McGarity could offer, and even then he was quick to add a sobering dose of reality.

He reminded everyone of the Miami Marlins, who were struck with a coronavirus outbreak just days into a baseball season that already had been delayed by nearly four months.

"No one in college football has even practiced yet," McGarity said, as though he was already preparing everyone for a fall without college football. "This is just a date. It's a date we're holding. I sure hope we start then. But as we've seen with professional sports already, this thing can change on a dime."

No sport faces more daunting odds to pull off a season that is relatively free of the highly contagious virus. Football requires the biggest roster. Football demands the most contact. And we're talking about college-age kids who are even more likely than pro athletes (Lou Williams notwithstanding) to scoff at the risk posed by the pandemic, which has already claimed more than 150,000 American lives.

While many schools are planning to offer the bulk of their classes online, football teams will have to be on campus for practice time, film work, endless meetings and, oh yeah, just enough matriculation to at least maintain the appearance of being "student-athletes"

Well, there's the money, of course. While all Football Bowl Subdivision teams will likely have to play in empty stadiums or with greatly downsized crowds, the Power Five leagues are blessed with lucrative television deals that would help athletic departments bolster bottom lines that have been ravaged by economic meltdown.

"We have an obligation to try to play," he said. "Whether its volleyball or soccer or football, young people have a three-, four-, five-year window to participate in college sports. We have an obligation to try to make that happen, but it's got to be done in a safe manner. They have to feel like it's safe, and their parents have to feel it's safe. We have to learn to live in the COVID society."

We already knew that college football was prepared to press forward without its glorious intersectional games -- even a storied series such as Notre Dame vs. Southern Cal, which has been put on hold for the first time since World War II.

But the SEC took things a step further with its conference-only scheduling decision, which wiped out any hopes of saving four in-state rivalries against ACC opponents, all traditionally played on the final Saturday of the regular season.

All of them, gone.

"As members of the SEC, we're kind of bound by their rules," Florida athletic director Scott Stricklin said. "And right now, they've precluded all non-conference activity in the sport of football for this year. So as difficult as that is for us all in the state of Florida to wrap our minds around, that's where we're going to be for the fall of 2020."

Only a day earlier, the ACC made a transparent attempt to save all four rivalry games, voting for an 11-game schedule that included 10 conference games and one non-league game -- as long as the opponent was from within the state or was willing to play at the ACC stadium.

But the SEC decided there simply wasn't enough weeks in the calendar to get in a 10-game schedule that allowed for one off week, while also leaving another week open ahead of the conference championship game to provide some flexibility in the very real event that games have to be postponed because of the virus.

As it is, the SEC will decide its champion on Dec. 19 -- two weeks later that originally planned, just six days ahead of Christmas, and right up against the College Football Playoff semifinals that are scheduled for New Year's Day.

Still, it was a bitter blow to all involved. Even with all its ills, these are the sort of games that make college football special.

Clemson has faced South Carolina for 111 straight seasons, a streak that began during the Taft administration. Georgia vs. Georgia Tech isn't far behind with its "Clean, Old-Fashioned Hate" rivalry, which has been played every year since 1925.

Clemson athletic director Dan Radakovich said his school "aggressively lobbied the ACC to include an additional non-conference game for the primary purpose of maintaining our long-standing rivalry game with South Carolina. We're disappointed to hear of the scheduling decision announced by the SEC, as we know the importance of the Palmetto Bowl to the state of South Carolina."

McGarity said it hasn't really sunk in that his school won't close the regular season against the Yellow Jackets.

"This pandemic has created so many oddities," the Georgia AD said. "A lot of things are almost out of your control."

Indeed, there's only going to be one true champion this season.

Paul Newberry is a sports columnist for The Associated Press.Write to him at [email protected], follow him on Twitter at https://twitter.com/pnewberry1963 and find his work at https://apnews.com