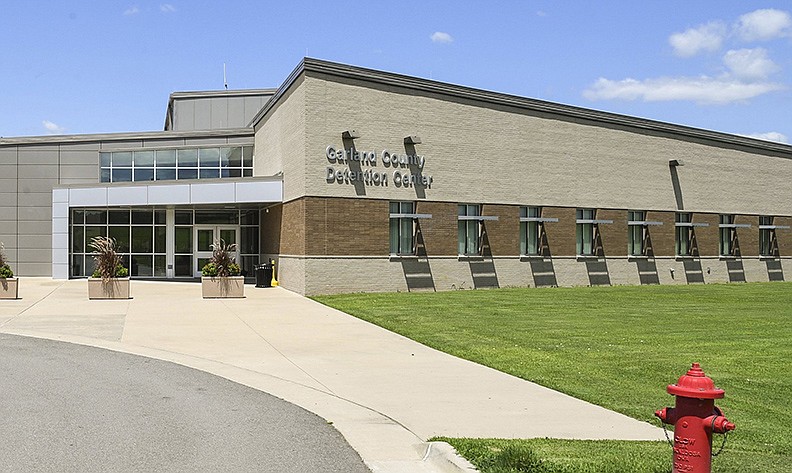 The outside of the Garland County Detention Center is shown on July 23, 2019. - Photo by Grace Brown of The Sentinel-Record

Five months ago the county was preparing to expand operations at the Garland County Detention Center to its full physical capacity.

The quorum court appropriated $441,935 from the jail fund to open the 64-bed F-Unit to male inmates, but the coronavirus pandemic reduced the inmate count to 75% of the total that had been straining operational capacity for more than two years. Male inmates have yet to be housed in the F unit, the jail said earlier this week, as the seven units already in operation have been able to accommodate the smaller population.

The jail has said when all eight housing units are operational the 168,000-square-foot facility can hold about 500 inmates.

The lower count has persisted despite the Arkansas Department of Correction suspending male transfers from county jails, Chief Deputy of Corrections Steven Elrod said in an email response. Intake and release logs the jail provided showed no men have been transferred to state prisons since June 16. Two women were transferred July 13. Elrod said 23 state inmates were awaiting transfer as of Thursday.

The suspension of transfers has been accompanied by a reduction in jail sanctions for parolees who violate the terms of their supervised release.

"Due to the pandemic the Arkansas Sheriff's Association requested the Arkansas Parole Board to temporarily take consideration and choose other options or sanctions rather than sentencing to local jails," Elrod said, adding that the jail is continuing to cite release misdemeanor arrestees who meet the criteria of the jail's population management strategy.

The state's Rules for Criminal Procedure allow the ranking officer on duty to issue misdemeanor arrestees citations in lieu of confinement. The Association of Arkansas Counties recommended the jail make use of the provision after the county solicited advice on how to alleviate jail crowding in the summer of 2018.

Intake and release logs showed more than 100 arrestees were cite released from May 20 to July 20.

No coronavirus cases have been reported in the jail, according to daily reports of active and cumulative cases in congregate settings the Arkansas Department of Health provides. More than 30 county, state and federal correctional facilities in Arkansas have had infected inmates or staff. Twenty-nine inmates have died from the virus as of Friday, including 11 at the Ouachita River Unit of the Arkansas Department of Correction in Malvern. More than 5,400 inmates have been infected.

Elrod said keeping the facility clean, quarantining new intakes for 14 days before they're put into the general population and screening people for symptoms before they enter the secured area of the jail are some of the steps that have kept the virus at bay.

Inmate education and self-improvement programs have been postponed as part of the strategy to limit access to the jail, Elrod said. Continuing them would require granting access to volunteers who administer many of the programs.

He said the jail accepts inmate transfers from jurisdictions outside Garland County on a case-by-case basis.

"By executing the facility's preexisting infection control plan in coordination with our contracted medical services group, as well as implementing recommendations from the Department of Health and Centers for Disease Control and Prevention," Elrod, explaining how the jail has kept the virus out of the facility, said. "There are no guaranteed methods to keep the pandemic out of the jail, rather, be prepared for when it arrives."