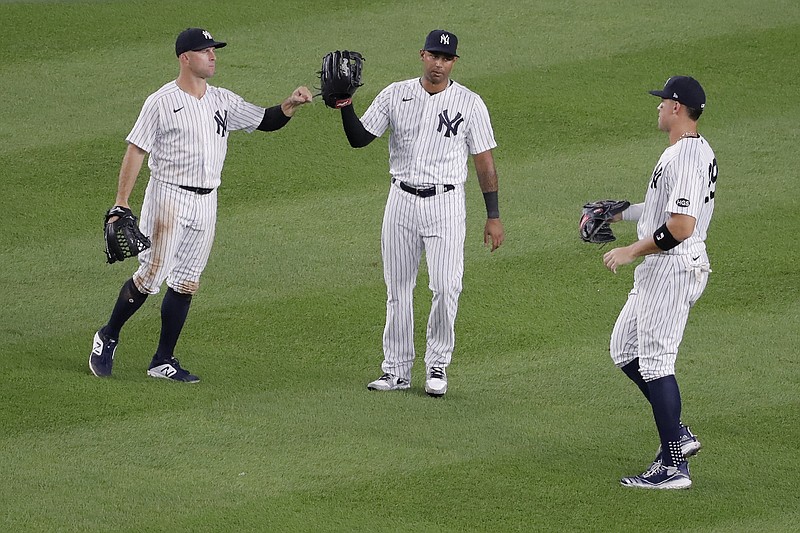 NEW YORK -- Aaron Judge homered for the third straight night, Jordan Montgomery cut up one of the league's hottest lineups in his 2020 debut and the New York Yankees beat the Boston Red Sox 5-1 on Friday night in their first home game of the coronavirus-shortened season.

Michael Chavis homered for Boston and Phillips Valdez impressed over 2 2/3 scoreless innings, but the club couldn't overcome another poor start by Ryan Weber (0-2).

There was also a moment of silence for late Yankees co-owner Hank Steinbrenner, who died in April. New York is wearing uniform patches with his initials this season.

Montgomery (1-0) pitched 5 2/3 innings, limiting the Red Sox to a run, five hits and a walk with four strikeouts.

Darin Ruf drove in three runs, and Chadwick Tromp had his first major league hit and RBI for the Giants.

Flores hit a 2-2 pitch from Minor into the left field stands to put the Giants ahead 4-2 in the fifth. Flores also walked and scored as part of San Francisco's three-run seventh.

ANAHEIM, Calif. -- Kyle Tucker had three hits and a career-high four RBIs, and Houston started a 10-game road trip with a win.

The Astros got a season-high 12 hits during the 4-hour, 21-minute game, which is the longest nine-inning contest in Angels Stadium history.

Brandon Bielak (2-0) came in after Lace McCullers Jr. and pitched two scoreless innings. Five Astros pitchers issued 12 walks, but Los Angeles left 12 on base and were 3 for 18 with runners in scoring position.

Matt Andriese (0-1) faced the minimum in the first but couldn't get out of the second. Six of the first seven Astros reached base in the inning, with Tucker's double being the key hit.

DETROIT -- Spencer Turnbull and the Detroit bullpen combined on a three-hitter, and Austin Romine and Travis Demeritte each drove in two runs.

Turnbull (1-0) allowed two runs and three hits in six innings. He struck out six, walked one and didn't allow a hit until former Tigers teammate Nick Castellanos doubled leading off the fifth.

ATLANTA --Travis d'Arnaud drove in five runs, including three with a bases-loaded double that capped a five-run eighth against his former team and Atlanta rallied from six runs down.

D'Arnaud had three hits. The biggest was the double off Seth Lugo (1-1) that gave Atlanta the lead and completed the comeback from deficits of 8-2 and 10-5.

Lugo walked Marcell Ozuna to load the bases. Johan Camargo popped out to shallow right field before d'Arnaud cleared the bases with his double to the gap in right-center.

Chris Martin ended the game when Wilson Ramos hit a fly ball to deep right field with runners on first and second. Martin earned his first save. Grant Dayton (1-0) pitched a scoreless eighth.

Dallas Keuchel picked up the win for the White Sox. Alex Colome converted his first save opportunity.

Kuechel (2-0) worked out of trouble seemingly the entire game. He retired the Royals in order in only one inning, and allowed just two runs on seven hits in 5 1/3 innings. He walked one and struck out three.

Kris Bubic (0-1) settled down after struggling early in his big league debut for Kansas City. He allowed three runs (two earned) on three hits. He walked one and hit James McCann twice.

Randy Dobnak (1-1) pitched five scoreless innings for Minnesota following a day of COVID-19 testing and uncertainty due to two positive tests by the St. Louis Cardinals, who played here earlier in the week.

Taylor Rogers finished off his second save of the season.

Darvish (1-1) allowed two hits, struck out seven and walked one, bouncing back nicely after he struggled in his first start last weekend against Milwaukee.

Chicago also got a solo home run from Jason Kipnis in its fourth win in five games.

Kipnis connected in the fourth, sending a drive to the empty bleachers in right. The Cubs added two more in the fifth, taking advantage of a combined four walks in the inning for Trevor Williams (0-2) and reliever Nik Turley.

The Orioles trailed 2-0 in the fourth inning before Renato Núñez doubled and Santander followed with a drive to center. Kevin Kiermaier backed up to the wall, leaped and stuck his glove high above the 7-foot barrier.

The center fielder timed his jump perfectly, but the ball glanced off his mitt and dropped over the wall.

Brandon Lowe homered for the Rays, who have lost three straight following a 4-1 start. Lowe's drive tied the game in the fifth, but Santander delivered an RBI single in the bottom half off Pete Fairbanks (1-1) to put Baltimore back in front.

Paul Fry (1-0) got the win and Cole Sulser worked the ninth for his second save.

Walker (1-1) was dominant making his first start in Seattle since the end of the 2016 season before being traded to Arizona. Walker struck out eight and walked two.

Reliever Bryan Shaw stumbled in the eighth giving up a two-run triple to Marcus Semien and Laureano's sacrifice fly. Taylor Williams pitched the ninth for his second save.

Lewis singled and scored from first base on Kyle Seager's two-run double in the fourth inning. In the fifth, Lewis lined an RBI single to center to score J.P. Crawford. Lewis has 15 hits in the first eight games.

PHOENIX -- Christian Walker hit a three-run double in the eighth inning and Arizona broke out of its offensive funk.

The Diamondbacks labored through the first seven innings, managing one run and five hits.

Trailing 3-2 in the eighth, Arizona loaded the bases against Blake Treinen (0-1) and Walker lined a double just past the outreached glove of center fielder Mookie Betts. David Peralta followed with a run-scoring single to make it 5-3.

Hector Rondon (1-0) got one out in the eighth for his first win with Arizona. Archie Bradley walked a batter and gave up a double to Betts in the ninth before getting Cody Bellinger to pop out for his second save in three chances.

Betts hit his first homer with the Dodgers, had three hits, drove in two runs and made a sensational, long throw for an out at third. Corey Seager homered for the third straight game.

Pham sent a fastball from closer Wade Davis (0-1) over the left-center wall on a 3-2 count to give the Padres an 8-5 lead. Davis got two quick outs in the inning before Tatis took him deep.

Craig Stammen (1-0) threw 1 1/3 scoreless innings to earn the win, while Kirby Yates made things interesting in the ninth. Yates surrendered a run-scoring single to Charlie Blackmon and then walked Ryan McMahon with the bases loaded to make it 8-7. He was taken out for Drew Pomeranz, who got pinch-hitter Chris Owings to fly out to earn his second save.