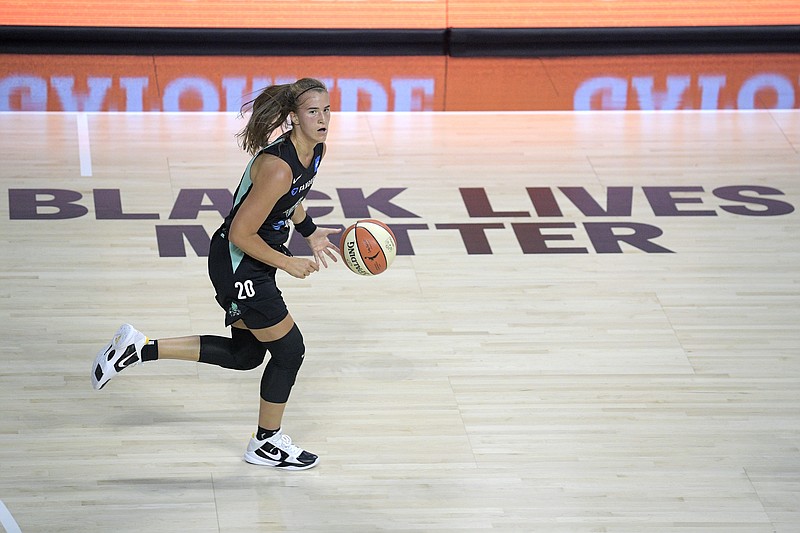 New York Liberty forward Sabrina Ionescu (20) pushes the ball up the court during the first half of Saturday's WNBA game against the Seattle Storm in Ellenton, Fla. - Photo by Phelan M. Ebenhack of The Associated Press

BRADENTON, Fla. -- I admit I was really nervous for my first game as a pro.

There isn't that pregame meal or specific shoes you have to wear for games like we had in college. I'm still trying to figure out what works best for me. What time to eat? What time to take a nap? I know I'll get it down pat soon. I have to say, putting on that Liberty jersey was awesome. It was different than the green and yellow I've worn the last four years, but special in its own way.

There was definitely a lot of hype around that game against Seattle. It was nationally televised and tipped off the WNBA season. Everywhere you looked there was an All-Star like Sue Bird and Breanna Stewart.

After it was over, I knew I could have done better.

I know I didn't shoot great, but honestly there was nothing wrong with my shot that I needed to fix. It was more the mental aspect of it.

I know I willed myself into some of those misses and that was frustrating looking back on it.

I got back to my hotel room and I had so many texts and messages from people congratulating me on my first game. There really is such a cool relationship between the NBA and WNBA as they definitely support us. Just seeing so many of them in the orange WNBA hooded sweatshirt over the weekend was awesome.

It meant a lot to me to hear from so many of the NBA guys, including LeBron James, Damian Lillard, Ja Morant and Steve Nash. They told me that I looked poised and that I was going to have a great career.

It was also helpful to connect with Steph (Curry) on FaceTime to go over what went right and wrong in the opener.

The good news was that there was another game a few days later against Satou Sabally and Dallas.

I knew if I was open to shoot it. That's what I did in the second game and I was able to hit a few. Once the first couple went in, my confidence grew.

It was also nice seeing Satou out there for Dallas, although it was a little weird seeing her in a different jersey. I had to get used to not passing to her. I'm always going to be rooting for her.

Although, I did tell her on the free throw line 'don't miss' with a smile. She looked back at me and winked after she made it. We went through so much at Oregon, we'll always be on the same team forever.

Even though we didn't get the win against Dallas, I definitely felt more comfortable out there.

I know it's going to be a growing process this year for me and the team, and I can't wait for us to get our first win.