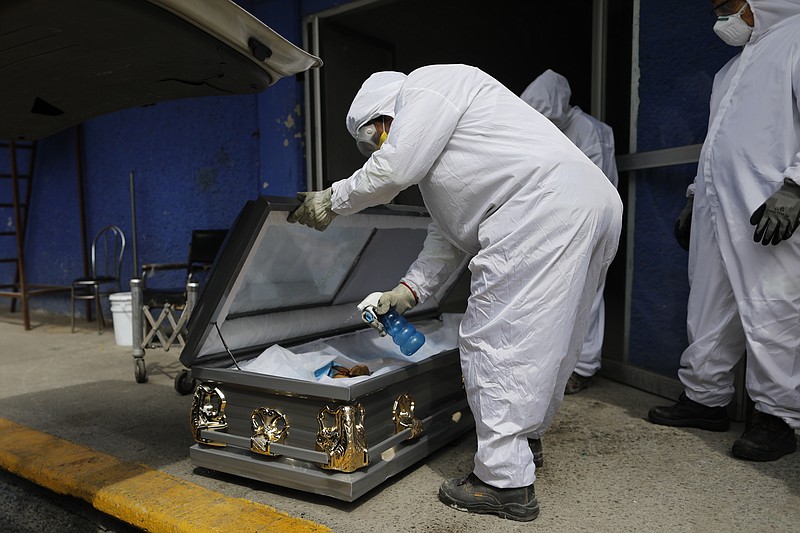 A worker wearing protective gear sprays disinfectant solution inside the coffin of a person who died from suspected COVID-19, as the body arrives at the crematorium at Xilotepec Cemetery in Xochimilco, Mexico City, Monday, July 27, 2020. (AP Photo/Rebecca Blackwell)

Mexico now has the third most COVID-19 deaths in the world, behind Brazil and the United States, where a hurricane bearing down on the East Coast on Saturday is threatening to complicate efforts to contain the virus.

Hurricane Isaias' imminent arrival forced the closure of some outdoor testing sites even though Florida has become a major hot spot, and other states in the path of the storm prepared emergency shelters that comply with social-distancing measures.

But Florida Gov. Ron DeSantis said no immediate evacuation orders have been given and that hospitals in general are not being evacuated of coronavirus or other patients.

Meanwhile, Mexican health officials on Friday reported 688 new deaths, pushing the country's confirmed total to over 46,600. That put Mexico just ahead of the United Kingdom, which has more than 46,100, according to the tally by Johns Hopkins University.

Some countries are seeing hopeful signs: China reported a more than 50% drop in newly confirmed cases in a possible indication that its latest major outbreak in the northwestern region of Xinjiang may have run its course.

However, in Hong Kong and elsewhere, infections continue to surge. Hong Kong reported more than 100 new cases as of Saturday among the population of 7.5 million. Officials have reimposed dining restrictions and mask requirements.

And Vietnam, a former success story, is struggling to control an outbreak spreading in its most famous beach resort. A third person died there of coronavirus complications, officials said Saturday, a day after it recorded its first-ever death as it wrestles with a renewed outbreak after 99 days with no local cases.

All three died in a hospital in Da Nang, a hot spot with more than 100 cases in the past week. Thousands of visitors had been in the city for summer vacation and are now being tested in Hanoi and elsewhere.

Twelve additional cases were confirmed on Saturday, all linked to Da Nang Hospital. Officials tightened security and set up more checkpoints to prevent people from leaving or entering the city, which has been in lockdown since Tuesday.

A makeshift hospital was set up, and doctors have been mobilized from other cities to help.

"I want to be tested, so I can stop worrying if I have the virus or not," said Pham Thuy Hoa, a banking official who returned to the capital from Da Nang.

In South Korea, prosecutors arrested the elderly leader of a secretive religious sect linked to more than 5,200 of the country's approximately 14,300 confirmed cases. He has denied charges of hiding members and underreporting gatherings to avoid broader quarantines.

The global pandemic has affected nearly every aspect of this year's Muslim pilgrimage to Mecca, with as few as 1,000 pilgrims already residing in Saudi Arabia taking part, down from 2.5 million last year.

Poverty brought on by the pandemic is also making it harder for many to join in the four-day Eid al-Adha, or "Feast of Sacrifice," in which Muslims slaughter livestock and distribute the meat to the poor.

"I could hardly buy food for my family," Somali civil servant Abdishakur Dahir said. "We are just surviving for now. Life is getting tougher by the day."

The Saudi Health Ministry said there have been no cases of COVID-19 among this year's pilgrims. All were tested, their movements monitored with electronic wristbands and required to be quarantined before and after.

Meanwhile, India recorded its steepest spike of 57,118 new cases in the past 24 hours, taking its coronavirus caseload close to 1.7 million, with July alone accounting for nearly 1.1 million infections.

The country's Civil Aviation Ministry delayed resumption of international flights by another month until Aug. 31. But it will continue to allow several international carriers from the United States, Europe and the Middle East to operate special flights to evacuate stranded nationals.

In France, travelers entering from 16 countries where the virus is circulating widely now must undergo virus tests upon arrival at airports and ports. The country is not permitting general travel to and from the countries, which include the United States and Brazil. The testing requirement therefore only applies to people entering under limited circumstances, including French citizens who live in these countries. Those who test positive as of Saturday must quarantine for 14 days.

As autumn approaches, nations around the world are grappling with how to safely reopen schools.

A scientist advising the British government on the coronavirus pandemic says pubs in England may have to be closed to allow schools to reopen in September. Graham Medley, a member of the government's Scientific Advisory Group for Emergencies, told the BBC that there may have to be a "trade off."

In Utah, the Salt Lake City School District Board of Education announced that its schools will start the year with all online-only classes in response to an increasing number of confirmed cases in the city. Just days after public schools around Indiana reopened their doors, at least one student and one school staff member in districts around Indianapolis have tested positive for the virus.

The debate over school openings came as Dr. Anthony Fauci dismissed a tweet by President Donald Trump claiming the U.S. global lead in coronavirus cases is because of increased testing.

Fauci said the scale of the U.S. outbreak is the result of multiple factors, including some states opening up too quickly and disregarding federal guidelines.

On Friday, the head of the World Health Organization predicted the effects of the pandemic will be felt for "decades to come."

"Most of the world's people remain susceptible to this virus, even in areas that have experienced severe outbreaks," Tedros Adhanom Ghebreyesus said in London. "Although vaccine development is happening at record speed, we must learn to live with this virus." 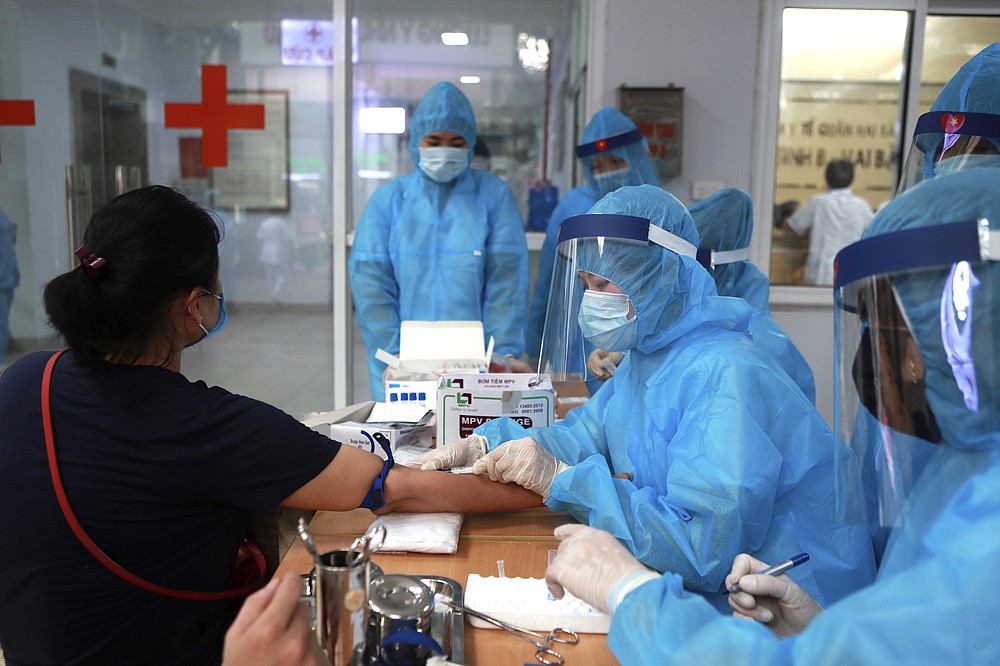 A health worker draws blood for COVID-19 test in Hanoi, Vietnam on Friday, July 31, 2020. Vietnamese state media on Friday reported the country's first-ever death of a person with the coronavirus as it struggles with a renewed outbreak after 99 days without any cases. (AP Photo/Hau Dinh) 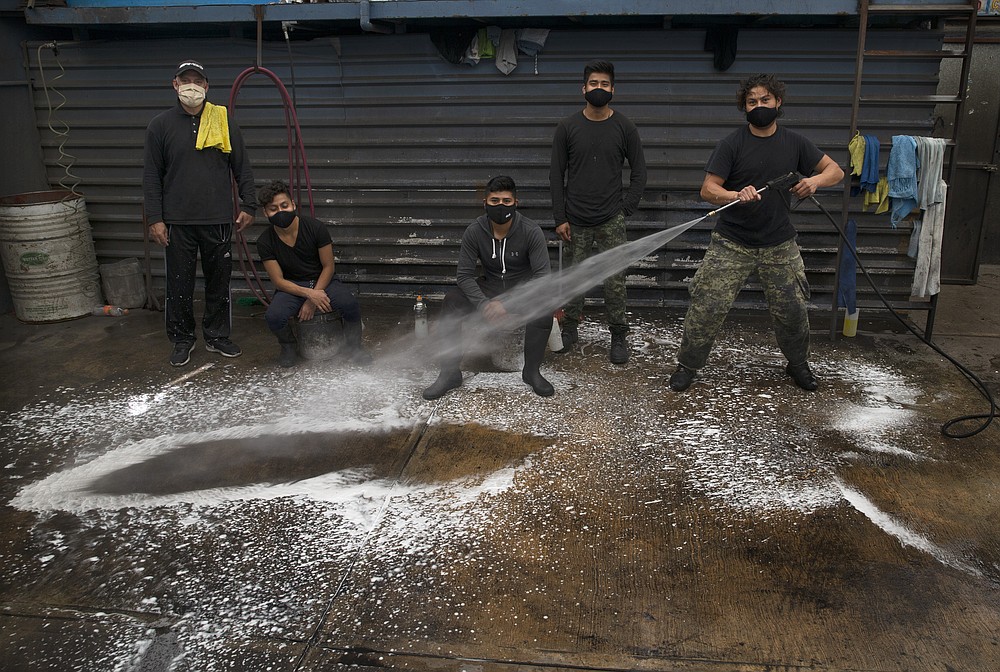 Employees of the Lavakar car wash pose for a group portrait in Mexico City, Friday, July 31, 2020. The workers said the shop was closed for three months during the COVID-19 related lockdown, and now after reopening only wash about 10 cars a day, compared to 30 before the lockdown. (AP Photo/Marco Ugarte) 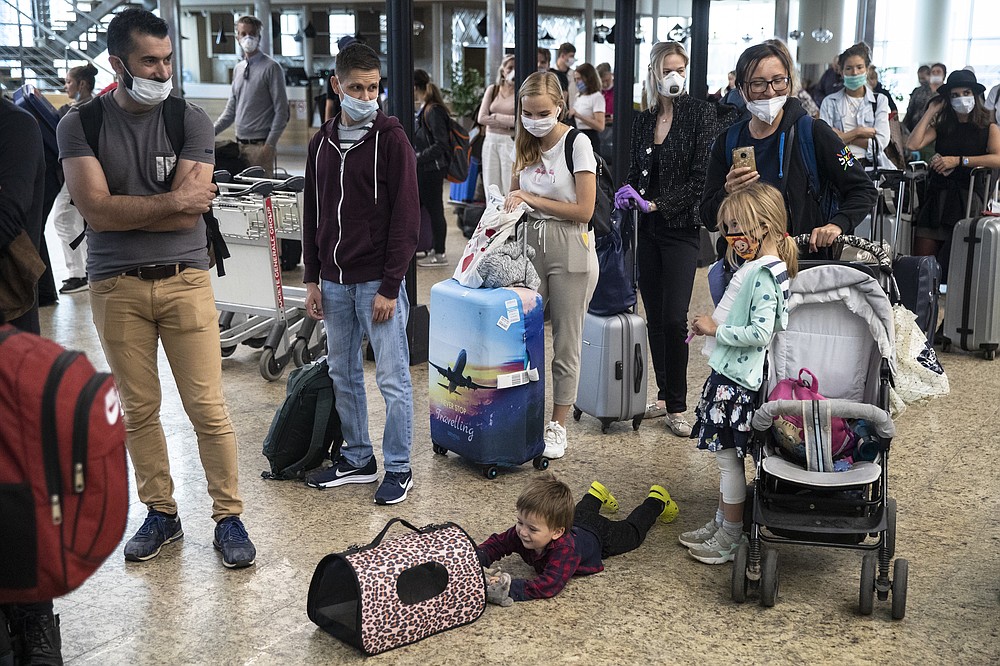 A child plays with a pet as people wait in line to check-in at Sheremetyevo international airport, outside Moscow, Russia, Saturday, Aug. 1, 2020. Russia restarts international flights to Britain, Turkey and Tanzania on Aug. 1 more than four months after closing its borders due to the coronavirus pandemic. (AP Photo/Pavel Golovkin) 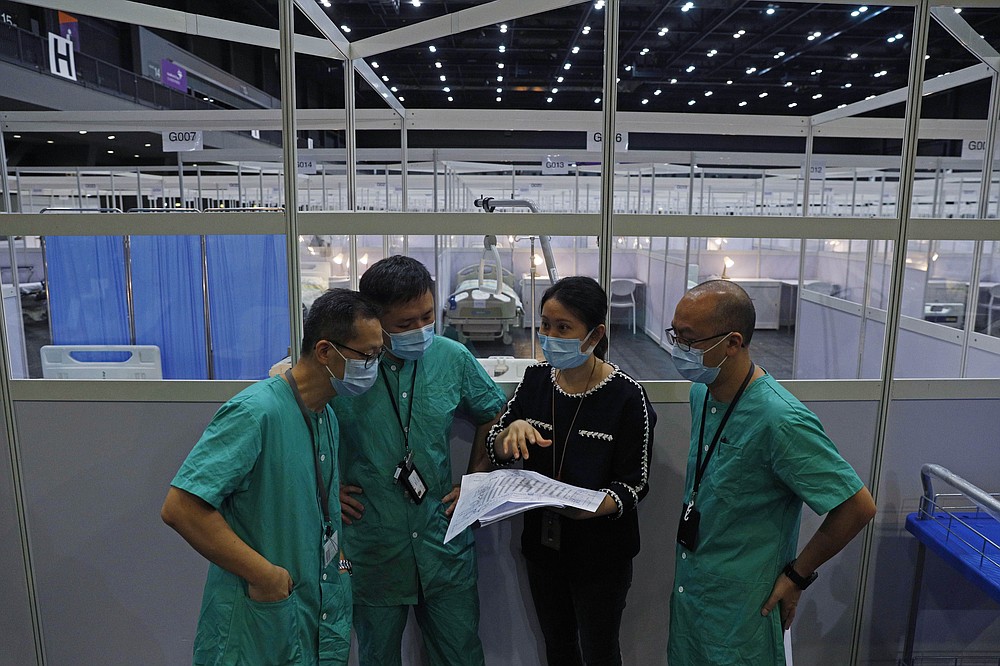 Medical workers make preparations at a temporary field hospital set up at Asia World Expo in Hong Kong, Saturday, Aug. 1, 2020. The new COVID-19 patient holding facility can accommodate up to 500 adult patients in stable conditions. The facility which is located near the Hong Kong International Airport is a big convention and exhibition facility and was previously used as a coronavirus testing center for incoming travelers. It's transformed into a treatment facility so that it helps freeing up hospital beds for the serious patients. (AP Photo/Kin Cheung) 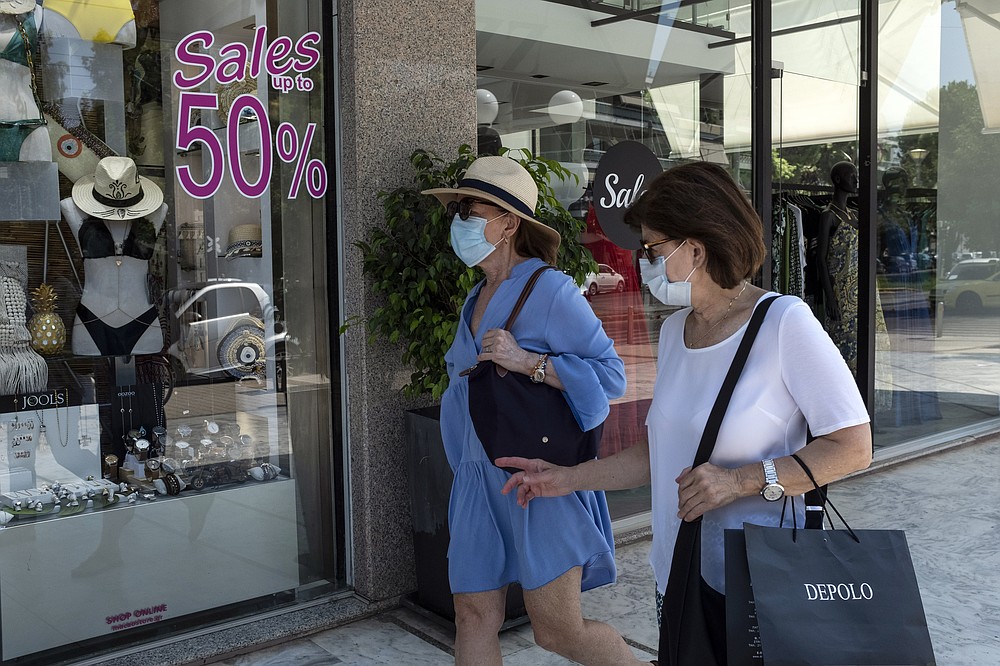 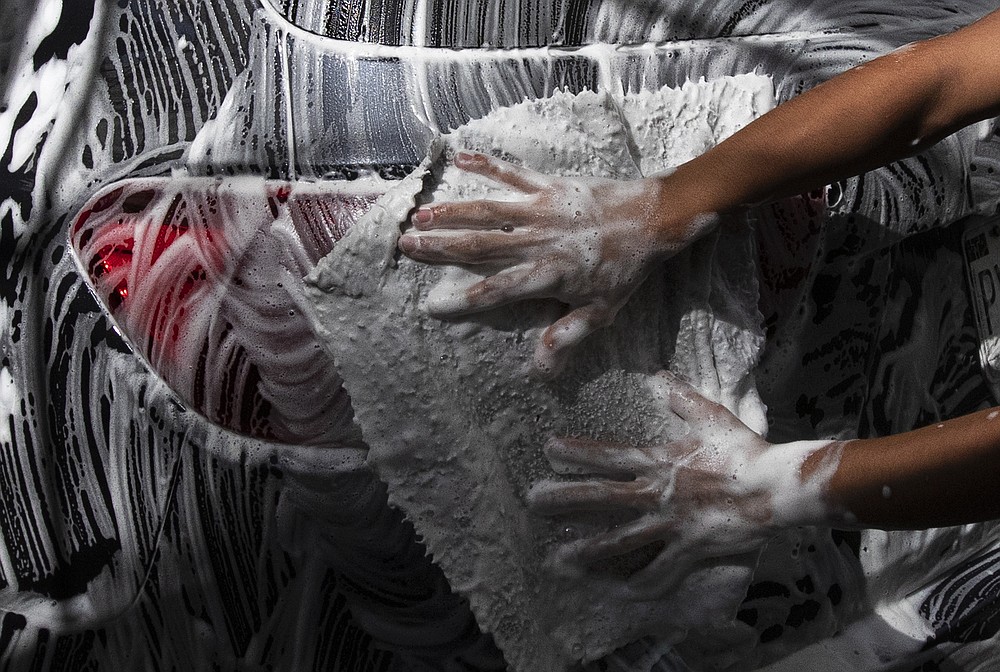 Fransisco Palomino washes a car as he works at the Lavakar car wash in Mexico City, Friday, July 31, 2020. Workers said the car was closed for three months during the COVID-19 related lockdown, and now after reopening only service about 10 cars a day, compared to 30 before the lockdown. (AP Photo/Marco Ugarte) 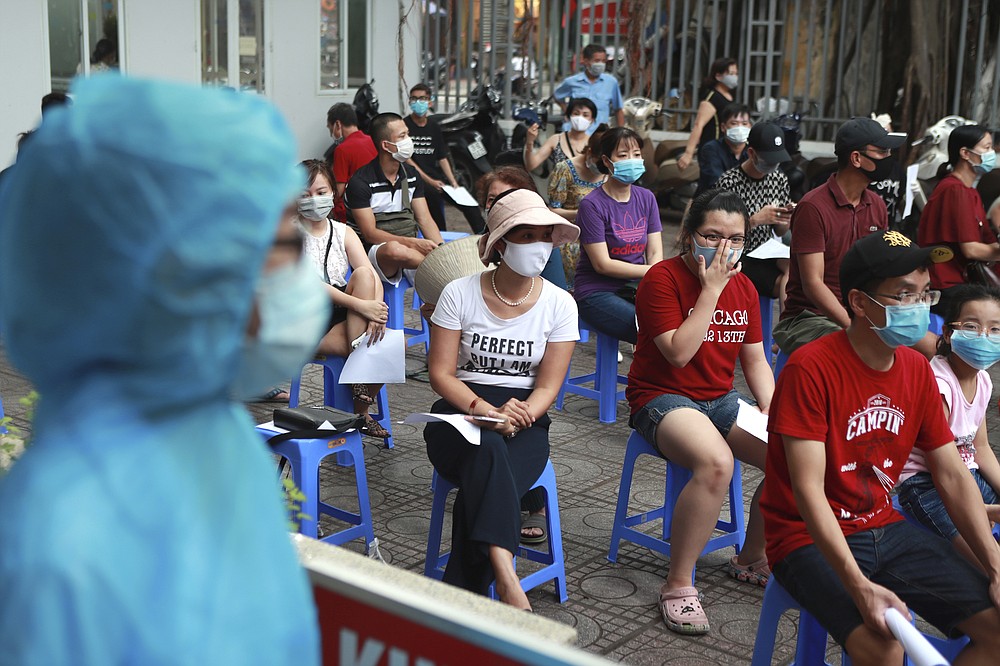 People wait in line for COVID-19 test in Hanoi, Vietnam, Friday, July 31, 2020. Vietnam reported on Friday the country's first ever death of a person with the coronavirus as it struggles with a renewed outbreak after 99 days without any cases. (AP Photo/Hau Dinh) 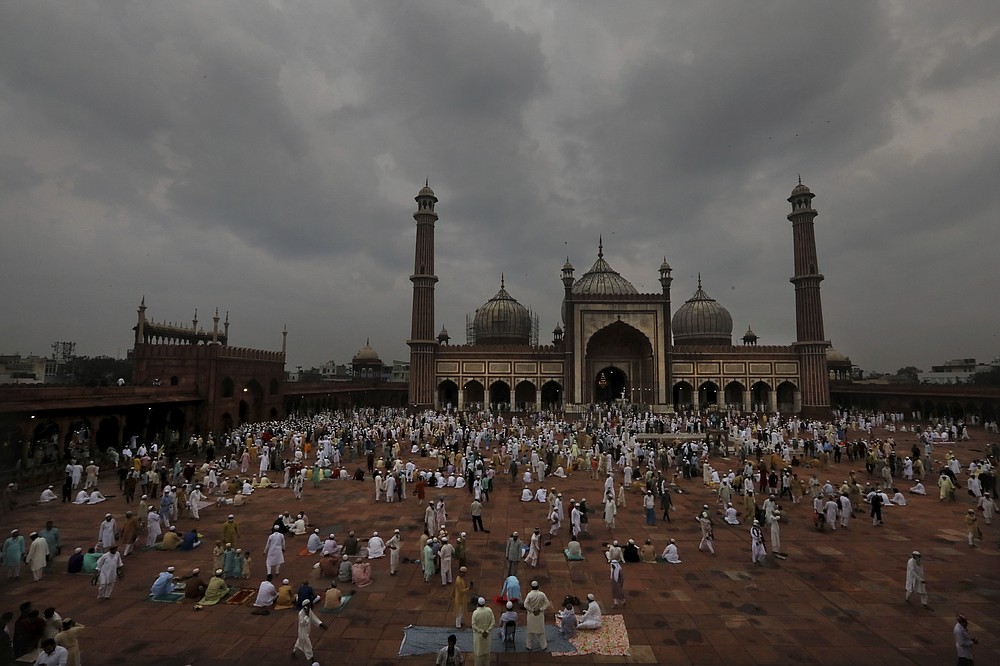 Indian Muslims wait as others leave after offering Eid al-Adha prayer at the Jama Masjid in New Delhi, India, Saturday, Aug.1, 2020. Eid al-Adha, or the Feast of the Sacrifice, by sacrificing animals to commemorate the prophet Ibrahim's faith in being willing to sacrifice his son. (AP Photo/Manish Swarup) 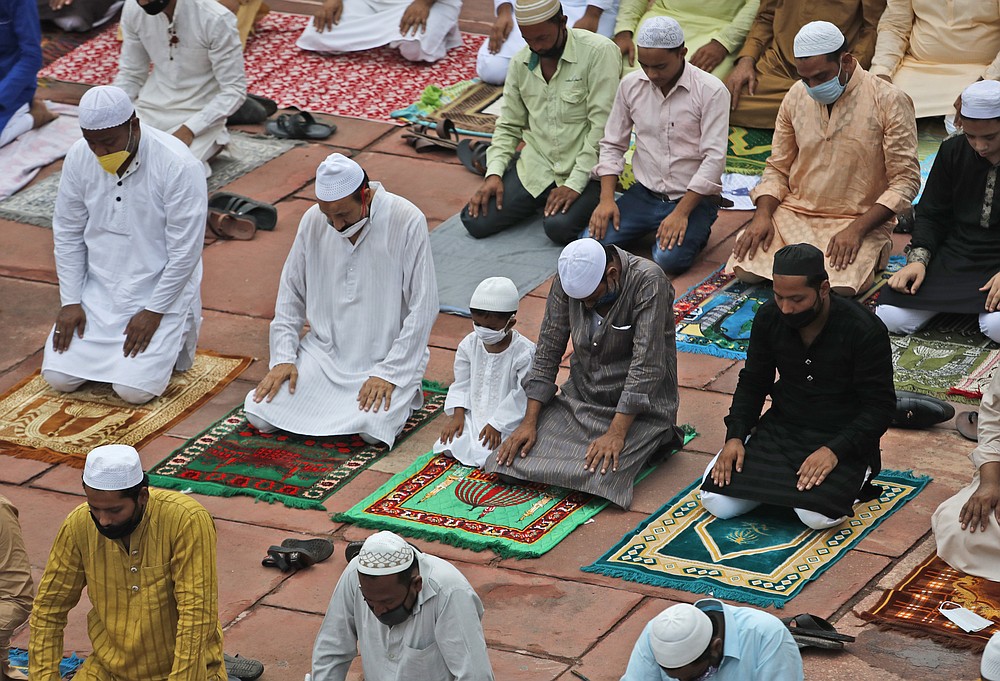 Indian Muslims wear masks as precaution against coronavirus and offer Eid al-Adha prayer at the Jama Masjid in New Delhi, India, Saturday, Aug.1, 2020. Eid al-Adha, or the Feast of the Sacrifice, by sacrificing animals to commemorate the prophet Ibrahim's faith in being willing to sacrifice his son. (AP Photo/Manish Swarup)