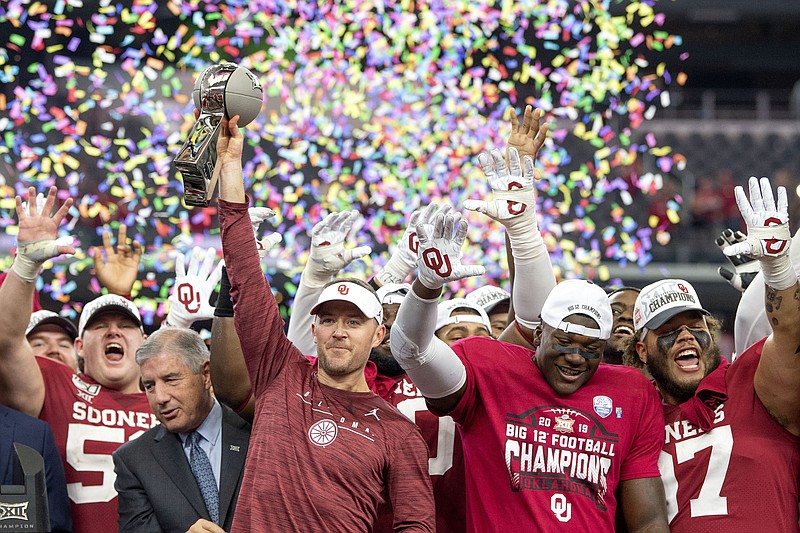 FILE - In this Dec. 7, 2019, file photo, Oklahoma head coach Lincoln Riley hosts the Big 12 Conference championship trophy after defeating Baylor 30-23 in overtime in an NCAA college football game in Arlington, Texas. Riley will earn an average of more than $7.5 million a year under a contract extension through the 2025 season. The university's board of regents approved the two-year extension Tuesday, July 28, 2020. (AP Photo/Jeffrey McWhorter, File)

Big 12 schools agreed Monday night to play one nonconference football game this year to go along with their nine league contests as plans for the pandemic-altered season continued to fall into place.

The Big 12's university presidents signed off on a 10-game schedule, adjusted to deal with potential disruptions from COVID-19 that gives schools the ability to play one nonconference opponent at home.

The conference's championship game is scheduled for Dec. 5, but could be moved back to Dec. 12 or 19, the league announced.

The 10-team Big 12 already plays a nine-game, round-robin conference schedule. Unlike other Power Five conference that have switched to either exclusively (Big Ten, Pac-12 and SEC) or mostly (ACC) league games this season, the Big 12 could not add more conference games without teams playing each other more than once.

As conferences take steps toward a football season that seems to be in precarious shape, the NCAA is expected to weigh in Tuesday on fall sports other than major-college football.

The association's Board of Governors is scheduled to meet and whether to cancel or postpone NCAA championship events in fall sports such as soccer, volleyball and lower-division football is expected to be a topic.

Only the Pac-12 has a full football schedule with matchups and dates in place among Power Five conferences. The Pac-12 will begin Sept. 26, along with the Southeastern Conference, which is still working on its new 10-game slate.

The Atlantic Coast Conference has opponents set for its 10-game conference schedule and will start the weekend of Sept. 12, but no specific game dates. The ACC has also said it will permit its teams to play one nonconference game.

The Big Ten, first to announce intentions to go conference-only this season, has yet to release a new schedule, but that could come later this week.

Now that the Power Five has declared its intentions the Group of Five conferences can start making plans and filling holes on their schedules.

American Athletic Conference Commissioner Mike Aresco has said the AAC could stick with its eight-game conference schedule and let its members plays as many of their four nonconference games as they can salvage or replace.

Early Monday, Texas State from the Sun Belt announced it was moving a nonconference game against SMU up from Sept. 5 to Aug. 29.