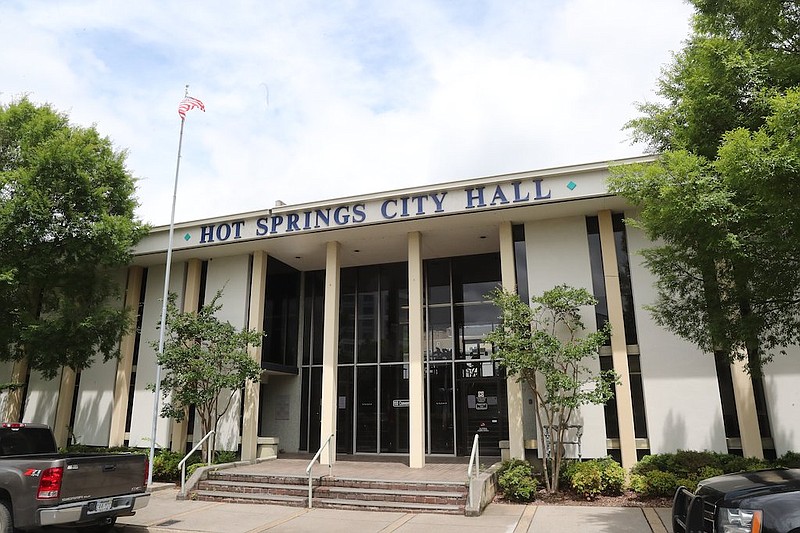 File photo of City Hall, as seen from Convention Boulevard. - File photo by The Sentinel-Record

The Hot Springs Board of Directors is expected to table tonight the appeal of the planning commission's denial of a request to rezone two acres at 2105 Malvern Ave. from residential to commercial.

City Attorney Brian Albright told the board last week that the petitioner asked for a continuance, but the public notice that listed tonight as the date the board will consider the appeal had already been published. He asked the board to table the item until its Sept. 1 meeting when it comes up for consideration tonight.

The planning commission denied the rezoning request 7-2 at its June 11 meeting, following the recommendation of the planning and development department's finding that the request didn't fulfill a public need for neighborhood commercial zoning on Malvern Avenue or show it wouldn't adversely affect adjacent neighborhoods.

In support of its finding that the rezone didn't fulfill a public need, planning staff said more than a dozen undeveloped parcels zoned neighborhood commercial were already within a mile of the subject property between Lakeside Road and Suburban Drive.

More than 100 residents and businesses wrote emails and letters in opposition to the rezoning request. Many cited the increased traffic a commercial development would bring to an already busy stretch of Malvern Avenue.

The Arkansas Department of Transportation is installing a traffic signal at the intersection of Malvern and Lakeside road, an intersection ArDOT said had an average daily vehicle count of 15,000 to 16,000 from 2012 to 2018.

The board has a history of ratifying planning commission recommendations. Earlier this year it upheld the commission's denial of New Life Church's application for a conditional-use permit to build a park and playground off Pakis Road. It also confirmed the commission's granting of planned development zoning to a vacation rental project off Buena Vista Road earlier this year and PD status to a townhome development on Ledgerock last summer.

Earlier this year the board endorsed the commission's decision to amend the PD zone at 1875 Malvern Ave., a few blocks north of the 2 acres at 2105 Malvern Ave. where a zone change has been requested. The amendment added a doughnut shop to the list of approved uses for the planned development, which was formerly a bank.

The reversal of the commission's approval of the city's application for a conditional-use permit to build a water tower in a residential area off Pakis Road in the summer of 2017 was one of the last times the board overruled the commission. The board approved the appeal brought by residents of the neighborhood, forcing the tower to be relocated south behind Cornerstone Market Place.

The annual mowing and landscaping contract that was tabled in April will be a new business item tonight. The city recommended the board award the $105,943 contract to Hot Springs Landscaping in April, but the board said the rating and ranking process staff used to evaluate the four bids was flawed.

The city finance department said in May that point values for the ranking's cost element were preassigned, which wasn't the case when the contract was awarded in previous years.

The general fund would pay for most of the contract, with the police and airport funds providing $2,000 and $13,000, respectively.