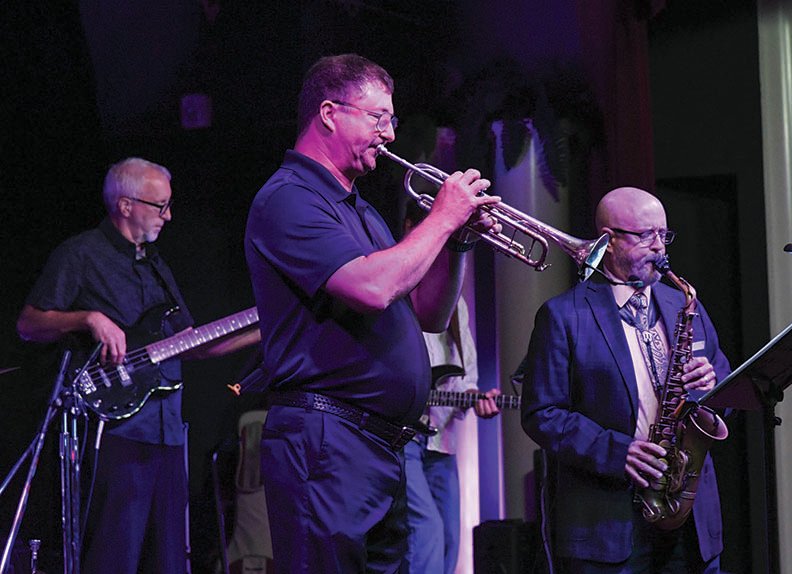 Texarkana-based jazz band State Line Avenue performs on the final day of the 28th Hot Springs JazzFest at The Vapors on Sunday, Sept. 1, 2019. - Photo by Grace Brown of The Sentinel-Record

The annual Hot Springs JazzFest has been canceled for the first time in its 28-year history, due to the COVID-19 pandemic, but the Hot Springs Jazz Society has found an alternative method to carry out its mission of promoting, perpetuating and presenting jazz to the community in 2020.

"In the process of trying to present jazz over the past few months since March, we did start the Block Party Jazz neighborhood concerts, so although we have had to cancel this JazzFest outdoor concert this year for the first time, we are very excited to continue to be able to present jazz to the community in a new way that will include small attendee numbers, but stream to our membership and any of our Facebook friends; so one door closes and another one opens," Jazz Society Executive Director Gretchen Miller-Taylor said.

According to a news release, the first Block Party Jazz concert was held in July at the home of Sharon and David Turrentine.

"This concert was attended by the Turrentine's neighbors and livestreamed on Facebook," the release said. "The positive response from neighbors and social media comments has encouraged the Jazz Society board to continue producing these small, socially distanced, concerts in neighborhoods throughout Hot Springs and the Village."

The next Block Party Jazz concert is scheduled for 7 p.m. Aug. 21 at the Universal Unitarian Village Church.

"The concert will present the John Leisenring Quintet featuring vocalist Fedett 'Lady J' Johnson," the release said. "This event will also be attended by a small audience and livestreamed on the Hot Springs Jazz Society's Facebook page. To attend this concert in the comfort of your easy chair, like the Hot Springs Jazz Society on Facebook and you can hear the music live."

For anyone interested in hosting a Block Party Jazz concert in their neighborhood, call Miller at 501-627-2425 or email [email protected]

As for the loss of this year's JazzFest, which would have been the 29th annual event, Miller said the society's board of directors decided on July 28 to fully cancel the event that was originally scheduled for Sept. 3-6.

"Originally we were going to have the Sept. 3 and 4 indoor concerts. Those were canceled immediately when we realized that wasn't going to be a possibility," she said. "The Sept. 5 concert, the block party outdoors on Broadway Street, we went ahead with all of the scheduling because we felt that was something we could offer the community since it was an outdoor event and presumably safe for the few people we expected to be attending.

"We were actually going to stream that, as well, on Facebook Live so we could reach a farther audience, knowing there were a lot of people who were not yet ready to venture out of their homes. But over the last couple of weeks, more about two weeks ago, when we started really researching the health department requirements ... we decided that we were just not prepared to do it in such a way we felt we were going to keep the musicians, the audience and the volunteers safe, or as safe as they needed to be kept."