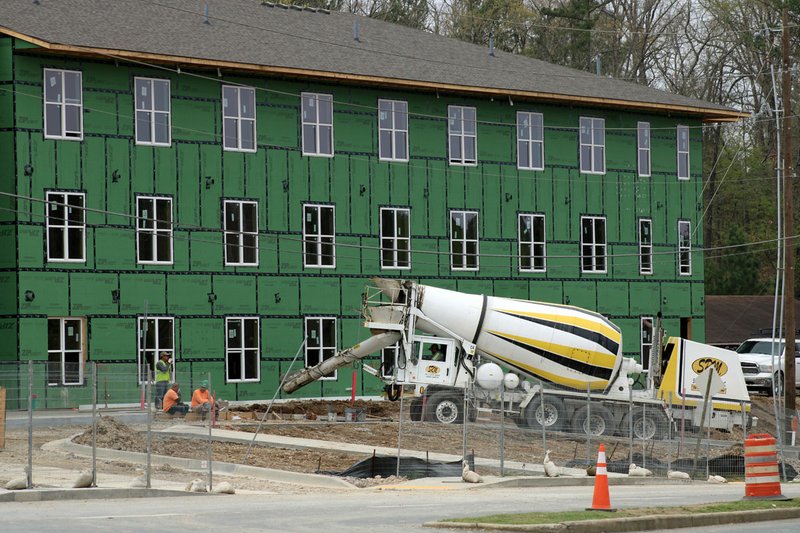 Dogwood Hall, National Park College's first on-campus housing, under construction in March, will have its grand opening on Aug. 18. - Photo by Jami Smith of The Sentinel-Record

National Park College will hold a grand opening for its first on-campus housing, Dogwood Hall, via Zoom at 10 a.m. Aug. 18.

"The grand opening will be held via Zoom and will include a virtual tour as well as comments from campus and community representatives," Melody Martinez, director of marketing and public relations, said.

Morgan Thomas, Servitas director of construction services, said construction is going well and the project will be finished on time, which he said is "remarkable" given the "unprecedented challenges" they had to face with the COVID-19 pandemic this year.

"We have been accelerating on the units trying to get them finished and into a livable condition, which we have been successful on. Now, we are just finishing up the final touches," he said.

Javon Southwell, NPC residence hall community manager, said the college had demands for single rooms from residents, and it was decided to convert some shared rooms to single occupancy.

Martinez said a committee of students, alumni, faculty and staff took part in the naming process. The group discussed all of the natural beauty of the campus, the region and the state and chose to work with names of trees found in Arkansas.

"Trees represent strength, growth, wisdom and knowledge. Dogwood Hall was selected by the team because the dogwood tree symbolizes loyalty, safety and determination and is associated with new beginnings and renewal," she said.

Thomas said he is proud to have been a part of this project which is a tremendous addition to the campus.

"The building is fantastic. It really is. Once it is all cleaned up and you can really see it, it is a quality building. I am looking forward to what future growth NPC has moving forward," he said.

NPC began its journey toward on-campus housing because the students expressed the need for safe and affordable housing options, President John Hogan said.

"We had to overcome a lot of obstacles to get to this point, but the difference this will make for our students is worth every investment we have made. Watching students move into the hall in a few weeks will be a rewarding experience for us all," he said.