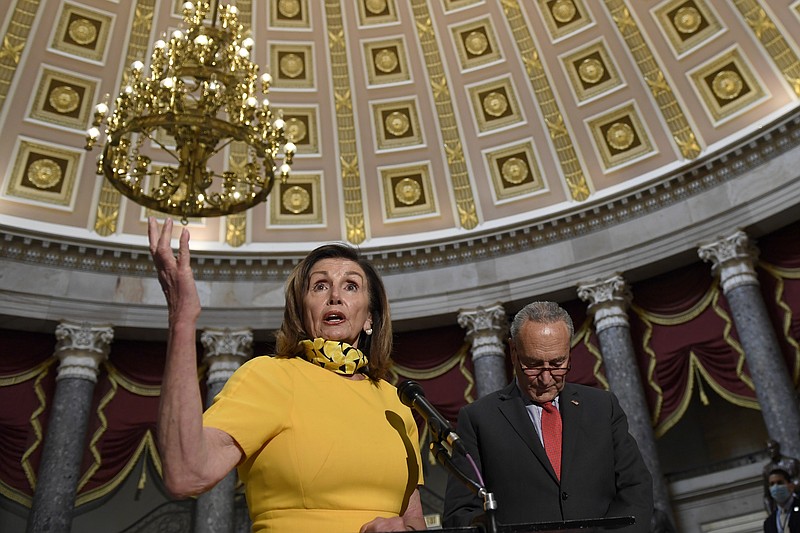 WASHINGTON -- Frustrated Senate Republicans re-upped their complaints on Tuesday that Democratic negotiators are staking too hard a line in talks on a sweeping coronavirus relief bill, but an afternoon negotiating session brought at least modest concessions from both sides, even as an agreement appears far off.

Top Democrats emerged from a 90-minute meeting with Trump administration officials to declare more progress. The Trump team agreed with that assessment and highlighted its offer to extend a moratorium on evictions from federally subsidized housing through the end of the year.

White House Chief of Staff Mark Meadows said Tuesday's session was "probably the most productive meeting we've had to date." Treasury Secretary Steven Mnuchin said the two sides set a goal of reaching an agreement by the end of the week to permit a vote next week.

"I would characterize concessions made by Secretary Mnuchin and the administration as being far more substantial than the concessions that had been made by the Democrat negotiators," Meadows said.

House Speaker Nancy Pelosi, D-Calif., issued a pointed reminder that she and Schumer are "legislators with long experience" and a track record of working complicated deals -- a rejoinder to critics complaining that they are being too tough and that the talks are taking too long.

"We agree that we want to have an agreement," Pelosi said. "Let's engineer back from there as to what we have to do to get that done."

Another glimmer of hope emerged as a key Senate Republican telegraphed that the party may yield to Democrats on an increase in the food stamp benefit as part of the huge rescue measure, which promises to far exceed a $1 trillion target set by the GOP.

Senate Agriculture Committee Chair Pat Roberts, R-Kan., said Tuesday that "you can make an argument that we need some kind of an increase" in food stamps and that he's raised the topic with Majority Leader Mitch McConnell. He added that an agreement on that issue could lead to further overall progress on the legislation, which remains stalled despite days of Capitol negotiations.

"They are taking a look at it and I think we can get a positive result," Roberts told The Associated Press. "If we can get a breakthrough on that, it could lead to some other stuff."

The food stamp issue -- left out of earlier relief bills -- is a top priority for House Speaker Nancy Pelosi, among other powerful Democrats, who have passed a 15% increase in the food stamp benefit as part of their $3.5 trillion coronavirus relief bill.

The overall talks are grinding ahead slowly, though urgency is growing among Senate Republicans, several of whom face tough election races and are eager to deliver a bill before heading home to campaign this month.

Sen. John Cornyn, R-Texas, said Monday that the chamber should not go on recess without passing the huge relief measure, and Sen. Lindsey Graham, R-S.C., offered a jobless benefit proposal that's more generous than a pending GOP alternative. Both are facing closer-than-hoped reelection bids in states that should be easy holds for Republicans.

Multiple obstacles remain, including an impasse on extending the $600-per-week pandemic jobless benefit aid to the renters facing eviction. The benefit has helped sustain consumer demand over recent months as the coronavirus has wrought havoc. Pelosi, D-Calif., wants to extend it through January at a $400 billion-plus cost, while Republicans are proposing an immediate cut to $200 and then replacing the benefit with a cumbersome system that would attempt to provide 70% of a worker's "replacement wage."

They are also pressing for funding for the Postal Service. Schumer and Pelosi summoned Postmaster General Louis DeJoy to the Capitol on Wednesday to discuss the agency's worsening performance and need for emergency funding.

"We've seen the delay of mail, and we're very worried about that affect on the election," Schumer said.

On the Senate floor, McConnell, R-Ky., continued to protest that Democrats are taking too tough a line. But he signaled he's far more flexible now than he was weeks ago.

"The American people in the end need help," McConnell told reporters. "And wherever this thing settles between the president ... and the Democrats is something I am prepared to support even if I have some problems with certain parts of it.″

Most members of the Democratic-controlled House have left Washington and won't return until there is an agreement to vote on, but the GOP-held Senate is trapped in the capital.

Areas of agreement already include another round of $1,200 direct payments and changes to the Paycheck Protection Program to permit especially hard-hit businesses to obtain another loan under generous forgiveness terms.

The House passed a $3.5 trillion measure in May, but Republicans controlling the Senate have demanded a slower approach, saying it was necessary to take a "pause" before passing additional legislation. Since they announced that strategy, however, coronavirus caseloads have spiked and the economy has absorbed an enormous blow.

The Senate GOP draft measure carries a $1.1 trillion price tag, according to an estimate by the Committee for a Responsible Federal Budget. Republicans have not released any estimates of their own. 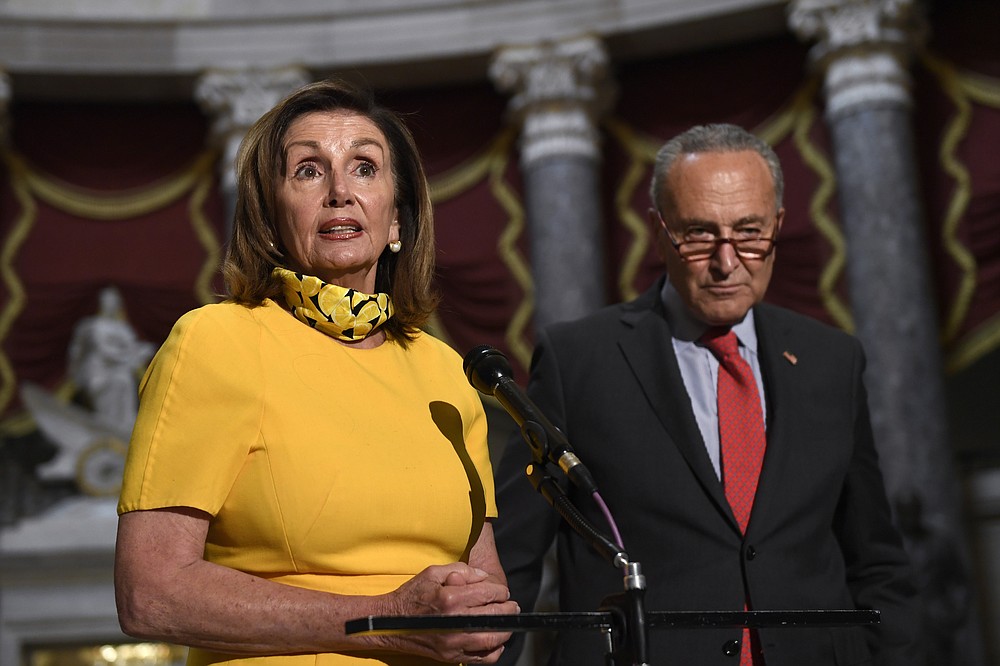 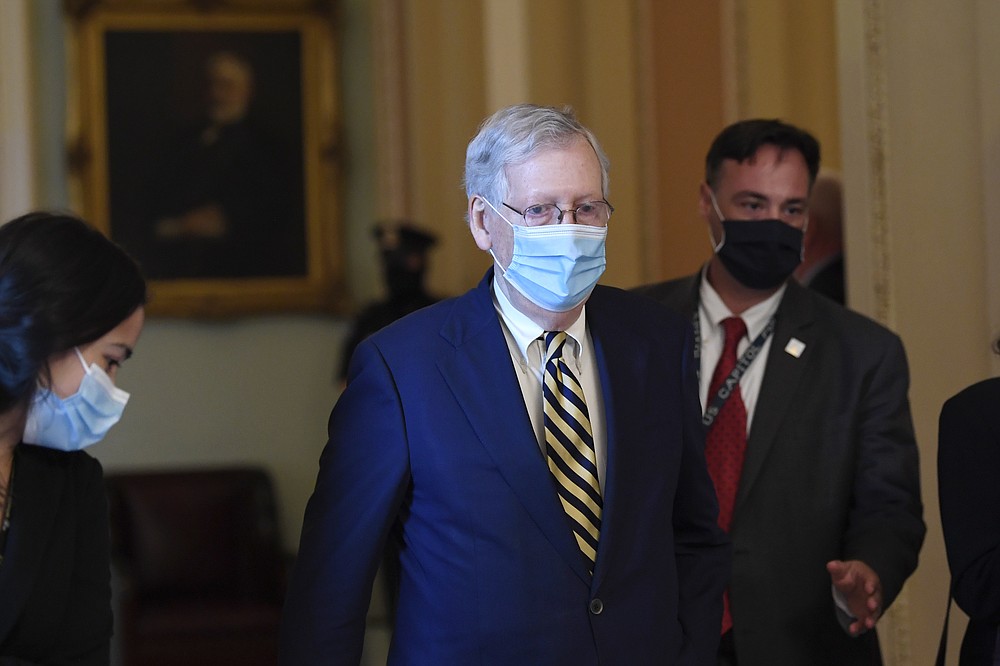 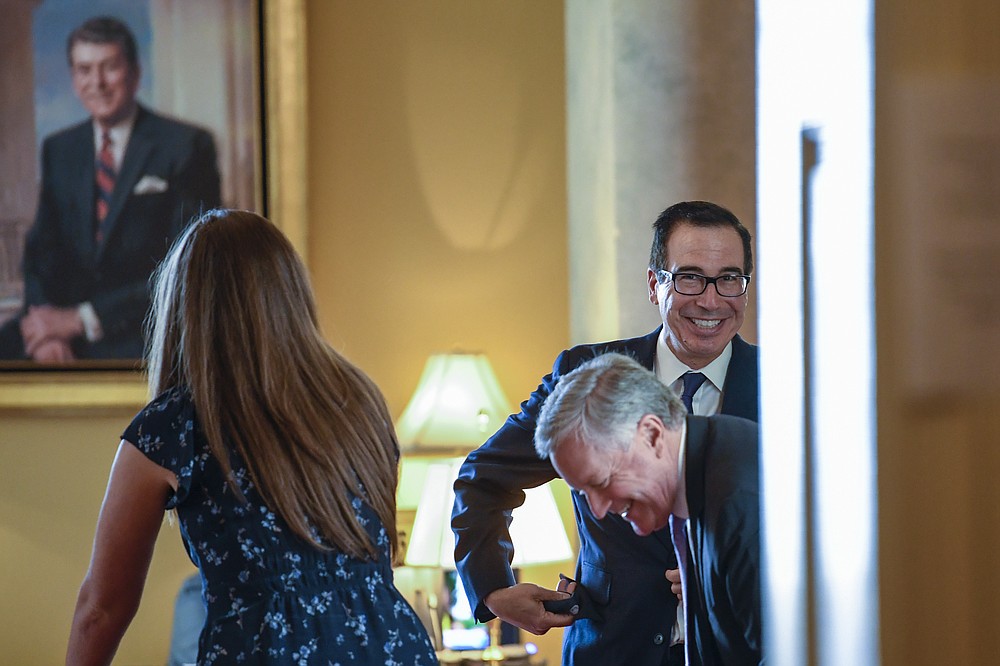 Treasury Secretary Steven Mnuchin, right, and White House Chief of Staff Mark Meadows, second from right, sit down in the office of Senate Majority Leader Mitch McConnell of Ky., on Capitol Hill in Washington, Monday, Aug. 3, 2020. Mnunchin and Meadows were coming from a meeting with House Speaker Nancy Pelosi of Calif., and Senate Minority Leader Sen. Chuck Schumer of N.Y., to continue their negotiations on a coronavirus relief package. (AP Photo/Susan Walsh)