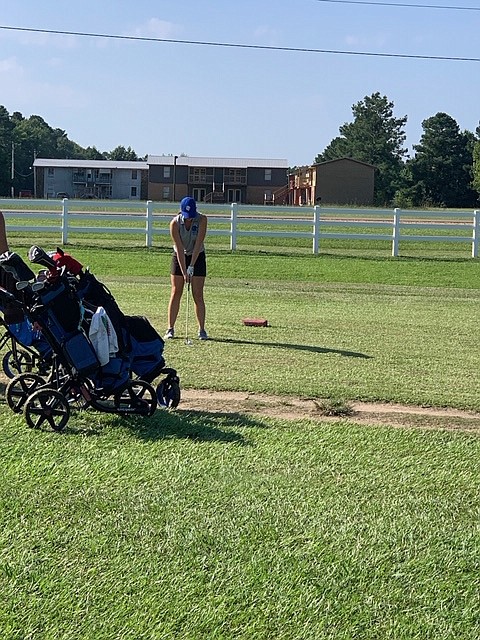 BISMARCK -- Bismarck got off to a strong start to the season as both boys and girls golf teams collected a pair of wins on Monday and Tuesday.

On Monday, the defending state champion Lady Lions carded a 125 while Smackover put up a team score of 184 at Smackover's Pine Hills Country Club.

The Lady Lions were led by medalist Hannah Collie, who shot a 41. Makenna Norris and Anna Cain shared runner-up medalist honors with both shooting a 42. Erin Fendley shot a 47, and Jenna Payne had a 56.

The Lady Buckaroos were led by Karly Willett's 52.

The Lions put up a team score of 142, but Smackover had just two golfers and was unable to compete as a team.

Bismarck's Blake Smith earned medalist honors with the low score of 45 while teammate Braden Efird shot a 46 for runner-up medalist honors. Logan Bubulka added a 51, and Wyatt Clement and Kalem Rorie both shot a 55.

Smackover was led by Trey Darden with a 52.

Efird won medalist honors with a 40 while Bubulka shot a 44 for runner-up medalist honors. Smith rounded out the team card with a 46, and Clement shot a 48.

Rorie led Bismarck's JV squad with a 48, Riley Tuttle had a 55, and Hayden Berry shot a 62. Andrew Taylor led the Hornets with a 50.

The Lady Lions dominated the course with a team score of 119. Bismarck's JV squad was second with a 157, and the Lady Hornets finished with a team card of 160.

Payne led the JV squad with a 46, Bailey Burch shot a 56, Cada Collins had a 56 and Ella Campbell finished with a 65.

Sarah Barkhimer led the Lady Hornets with a 51.

GLENWOOD -- Lake Hamilton's Ginny Higginbotham earned medalist honors as the Lady Wolves took a nine-stroke win over Centerpoint Tuesday, but the Wolves fell to the Knights in the team's first match of the season at Glenwood Country Club.

Higginbotham shot a 44 in the 9-hole match to lead the Lady Wolves card of 159 while Centerpoint finished with a 168.

Annabelle Coppedge carded a 57 and Kenley Spruill and Aspen Thornton each shot a 58 to round out Lake Hamilton's scoring.

Maddie Plyler led Centerpoint with a 55, Marlee Bright had a 56, and Bailey Brown rounded out the team card with a 57. Makenzie Massey shot a 62.

Jordyn Garner led the Lady Wolves JV squad with a 63, Audri Winfrey shot a 66, Reagan Carrouth had a 69 and Kenley Kincannon carded a 70.

Centerpoint's Dillon Fox won medalist honors as his 41 helped lead the Knights to a team card of 175. Lake Hamilton finished with a 193.

Jace Clark shot a 44, Kaden Owens and Kaden Horn both shot a 45, and Hayden Rogers finished up the scoring for Centerpoint with a 57.

Cade Robinson and Connor Hall led the Wolves with cards of 42, Zac Pennington shot a 53, and Jack Higginbotham finished with a 56.

"Cade Robinson and Connor Hall both had good rounds, both shooting a 42," said Lake Hamilton coach Brandi Higginbotham. "Both schools have quite a few newcomers on the girls side."

HOT SPRINGS VILLAGE -- Fountain Lake opened up its golf season with a win over Jessieville and Mountain Pine Tuesday at Diamante Country Club.

The Cobras tallied a team score of 154 for the win with Jessieville carding a 182 for second. Mountain Pine did not have enough players to compete as a team.

Carson McCoy earned medalist honors, leading the Cobras with a 43. Coil Burks and Brayden Buss shot a 55 and 56, respectively, to round out the Cobras team score.

Jarrett Davis led the Lions with a 46 while Grant Honeycutt and Leonard Huff both shot a 68 to finish out Jessieville's scoring.

Jessieville's Kelsey Saveall earned medalist honors in the girls match with a 53, and Jessieville's Callie Pedersen carded a 58. Camille McDaniel led Fountain Lake with a 55, and Bayley Brown shot a 56 for Mountain Pine.

"Today was great learning day for the student athletes involved," said Fountain Lake coach Michael Blees. "We all have a lot of young players that have showed improvement and will continue to improve as the season progresses."