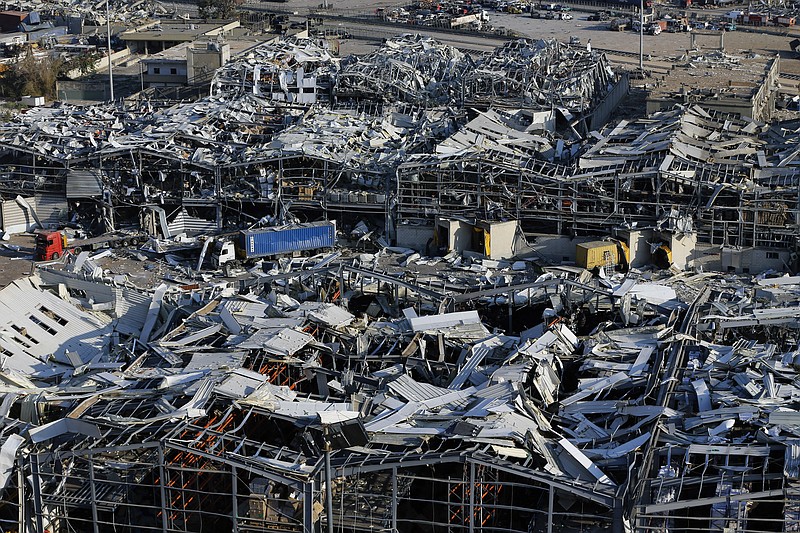 This photo shows a general view of the scene of an explosion that hit the seaport of Beirut, Lebanon, Wednesday. The massive explosion rocked Beirut on Tuesday, flattening much of the city's port, damaging buildings across the capital and sending a giant mushroom cloud into the sky. - AP Photo/Bilal Hussein

BEIRUT -- Investigators probing the deadly blast that ripped across Beirut focused Wednesday on possible negligence in the storage of tons of a highly explosive fertilizer in a waterfront warehouse, while the government ordered the house arrest of several port officials.

International aid flights began to arrive as Lebanon's leaders struggled to deal with the widespread damage and shocking aftermath of Tuesday's blast, which the Health Ministry said killed 135 people and injured about 5,000 others.

Public anger mounted against the ruling elite that is being blamed for the chronic mismanagement and carelessness that led to the disaster. The Port of Beirut and customs office is notorious for being one of the most corrupt and lucrative institutions in Lebanon where various factions and politicians, including Hezbollah, hold sway.

The investigation is focusing on how 2,750 tons of ammonium nitrate, a highly explosive chemical used in fertilizers, came to be stored at the facility for six years, and why nothing was done about it.

Losses from the blast are estimated to be between $10 billion to $15 billion, Beirut Gov. Marwan Abboud told Saudi-owned TV station Al-Hadath, adding that nearly 300,000 people are homeless.

"Beirut as we know it is gone and people won't be able to rebuild their lives," said Amy, a woman who swept glass from a small alley beside by a tall building that served as a showroom for a famous Lebanese designer and was a neighborhood landmark.

"This is hell. How are they (people) going to survive. What are they going to do?" she said, blaming officials for lack of responsibility and "stupidity."

Hospitals were overwhelmed by the injured. One that was damaged in the blast had to evacuate all its patients to a nearby field for treatment.

It was the worst single explosion to strike Lebanon, a country whose history is filled with destruction -- from a 1975-1990 civil war, conflicts with Israel and periodic terrorist attacks.

Lebanon already was on the brink of collapse amid a severe economic crisis and the coronavirus pandemic. Many have lost their jobs and seen their savings evaporate because of a currency crisis. Food security is a worry, since the country imports nearly all its vital goods and its main port is now devastated. The government is strapped for cash.

A senior U.S. Defense Department official and member of the U.S. intelligence community said there were no indications the explosion was the result of an attack by either a nation state or proxy forces. Both spoke to The Associated Press on condition of anonymity because they were not authorized to discuss intelligence briefings publicly. They told AP that at the moment, the explosion seems to have been caused by improper storage of explosives.

Fueling speculation that negligence was to blame for the accident, an official letter circulating online showed the head of the customs department had warned repeatedly over the years that the huge stockpile of ammonium nitrate stored in the port was a danger and had asked judicial officials for a ruling on a way to remove it.

Ammonium nitrate is a component of fertilizer that is potentially explosive. The 2,750-ton cargo had been stored at the port since it was confiscated from a ship in 2013, and on Tuesday it is believed to have detonated after a fire broke out nearby.

The 2017 letter from the customs chief to a judge could not be immediately confirmed, but state prosecutor Ghassan Oueidat ordered security agencies to start an immediate investigation into all letters related to the materials stored at the port, as well as lists of those in charge of maintenance, storage and protection of the hangar.

In the letter, the customs chief warned of the "dangers if the materials remain where they are, affecting the safety of (port) employees" and asked the judge for guidance. He said five similar letters were sent in 2014, 2015 and 2016. The letter proposes the material be exported or sold to a Lebanese explosives company. It is not known if there was a response.

Badri Daher, the head of the customs department, confirmed to the local LBC TV channel that there were five or six such letters to the judiciary. He said his predecessor also pleaded with the judiciary to issue orders to export the explosive materials "because of how dangerous they are" to the port and staff there.

Daher said it was his duty to "alert" authorities of the dangers but that is the most he could do. "I am not a technical expert."

President Michael Aoun vowed before a Cabinet meeting that the investigation would be transparent and that those responsible will be punished.

"There are no words to describe the catastrophe that hit Beirut last night," he said.

After the meeting, the Cabinet ordered an unspecified number of Beirut port officials put under house arrest pending the investigation.

The government also said public schools and some hotels will be opened for the homeless and promised unspecified compensation for the victims.

With the Port of Beirut destroyed, the government said imports and exports will be secured elsewhere, mostly in the northern city of Tripoli and the southern port of Tyre.

There were signs that public anger went beyond port officials to Lebanon's long-entrenched ruling class. Political factions have divided control of public institutions, including the port, using them to benefit their supporters, with little actual development. That has translated into crumbling infrastructure, power outages and poor services.

"May the Virgin Mary destroy them and their families," Joseph Qiyameh, a 79-year-old grocery store owner, said of the leadership. The blast damaged his store, his wife was hospitalized with injuries she suffered at home next door, and his arm was hurt. He doesn't have the money to fix his business, with his savings locked up in banks by controls imposed during the financial crisis.

The Hospital of the Sisters of Rosaries was knocked out of service by the blast, with one of the nuns killed and three others badly injured.

"In a moment, there was no longer a hospital. It is all gone," said one of the nuns, who suffered a leg injury.

Residents confronted a scene of utter devastation Wednesday, with smoke still rising from the port. The blast tore out a crater 200 meters (yards) across that filled with seawater, as if the Mediterranean had taken a bite out of the port and swallowed buildings with it. Much of downtown was littered with damaged cars and debris.

Drone footage shot by the AP showed the blast tore open a silo structure, dumping its contents into the debris. Estimates suggested about 85% of the country's grain was stored there.

Economy and Trade Minister Raoul Nehme said all the wheat was contaminated and unusable. But he insisted Lebanon had enough for its immediate needs and would import more, according to the state news agency.

Two planeloads of French rescue workers and aid headed to Beirut and French President Emmanuel Macron was to arrive Thursday to offer support for the former protectorate. The countries retain close political and economic ties. 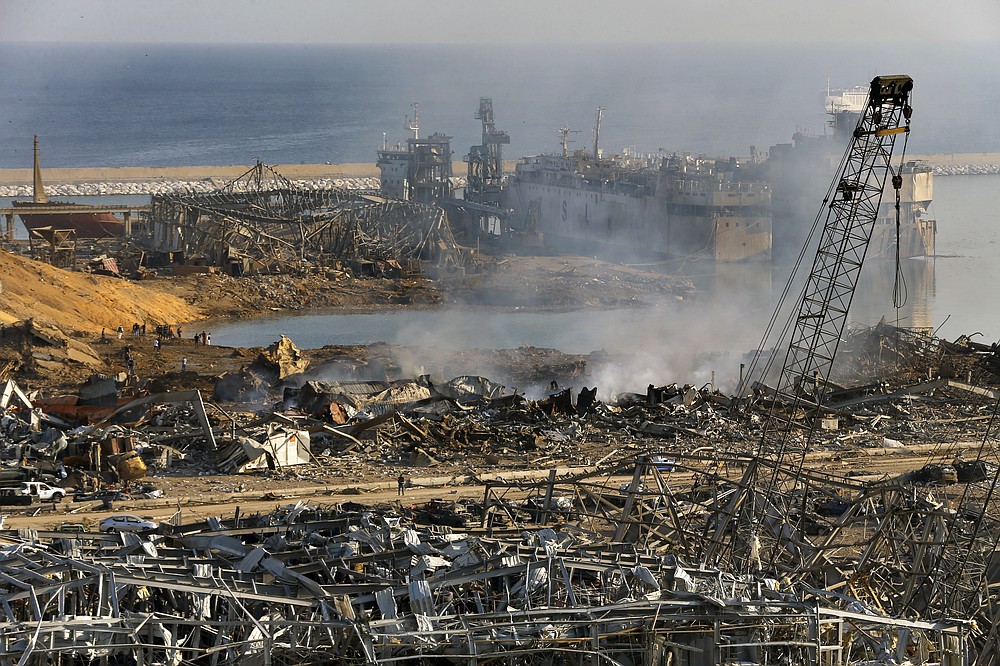 This photo shows a general view of the scene of an explosion that hit the seaport of Beirut, Lebanon, Wednesday, Aug. 5, 2020. The massive explosion rocked Beirut on Tuesday, flattening much of the city's port, damaging buildings across the capital and sending a giant mushroom cloud into the sky. (AP Photo/Bilal Hussein)