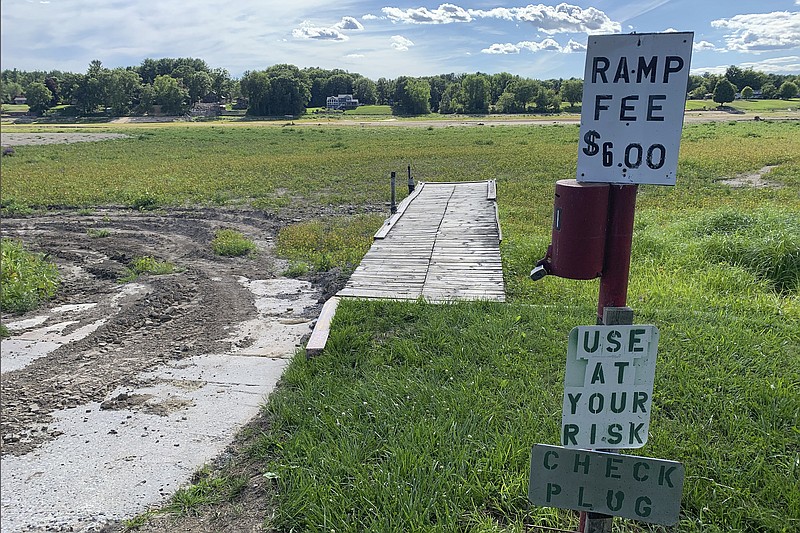 Vegetation thrives where a boat ramp once did at the Sanford Lake Marina, while erosion could threaten homes on the opposite shore of what was once Sanford Lake, July 30, 2020, near Sanford, Mich. Nature is returning to the dry beds of a string of mid-Michigan lakes that drained in May after two dams failed during torrential rains. (AP Photo/ Jeff McMillan)

LANSING, Mich. -- Nature is returning to craters left from lakes drained by two dams that failed in May during torrential rain in mid-Michigan.

But not always in a good way.

"Shortly after the water receded, you could look out over the exposed bottom lands of the lake and it was like looking at the Sahara Desert," said Dave Rothman, a board member with the Four Lakes Task Force, which is looking to obtain the four dams as well as the two lakes that were not drained. "That persisted on through about the middle of July. And then all that 90-plus degree weather that we had, then we started to get some rain and over the course of two weeks, the lake bottoms just mushroomed with plants."

Four Lakes Task Force wants to use eminent domain to gain ownership of four Midland-area dams -- including the Edenville and Sanford dams that failed in the May 19 storms, sending water raging down the Tittabawassee River and flooding homes and businesses.

It hopes to restore the infrastructure and shoreline of Wixom and Sanford lakes and prevent homes from being lost to the eroding edges of what were once the lakes.

It has filed requests in the courts to obtain the dams. Under eminent domain, the owners, Boyce Hydro and and Boyce Hydro Power, could be ordered to sell the properties to the task force as the designated authority representing the counties, task force spokesperson Stacey Trapani said.

The owners for years failed to invest and comply with government-set standards for health and safety on the hydroelectric Edenville dam. The two companies have since filed for Chapter 11 bankruptcy protection. They have blamed regulators and an insistence on high lake levels for the dam failures.

The state sued the owners, seeking fines for the destruction of natural resources as well as "gross mismanagement."

The flooding destroyed 150 houses and caused more than $200 million in property damage in the Midland area.

Plants are now rising from the craters that were once the two lakes. Purple loosestrife, an invasive flowering plant, is sprouting up -- a problem that Rothman said will be resolved by galerucella beetles that were released in the area in the 1990s and that eat purple loosestrife.

A bigger concern is that poplar trees are growing as dense as seven trees per square foot in what was once Wixom Lake, Rothman said.

"When we first started to get reports of these and go out and look at these seedlings just coming up this year, they were maybe 15 inches high in front of one of my friends' houses," Rothman said. "Two weeks later he went out and looked at the same trees and they're now almost 30 inches high."

Given the right conditions, fertile ground and moisture, poplar trees can grow to 5 feet (1.5 meters) in a year, Rothman said. If the lake doesn't return for five years, the trees could be 20 feet (6 meters) high and will be harder to remove.

But the biggest issue by far is erosion, Rothman said. With the exposed ground drying out, the shoreline, now clifflike, is becoming increasingly unstable, crumbling in closer and closer to what were once lakefront homes.

Four Lakes Task Force estimates it will cost more than $30 million to stop the erosion, remove the debris left by the flooding and stabilize all four dams. The goal is do all this in two years before further damage can be done to the 6,000 homes on the lakes valued at about $800 million, Trapani said.

Rothman said that as the task force looks at plans to rebuild the two broken dams and strengthen the other two, safety will be the priority. He said they will meet contemporary requirements for dam construction and spillway capacity.

"Our No. 1 principle for doing work to bring the lakes back is to make sure that when we rebuild the dams, this can't happen again," Rothman said. 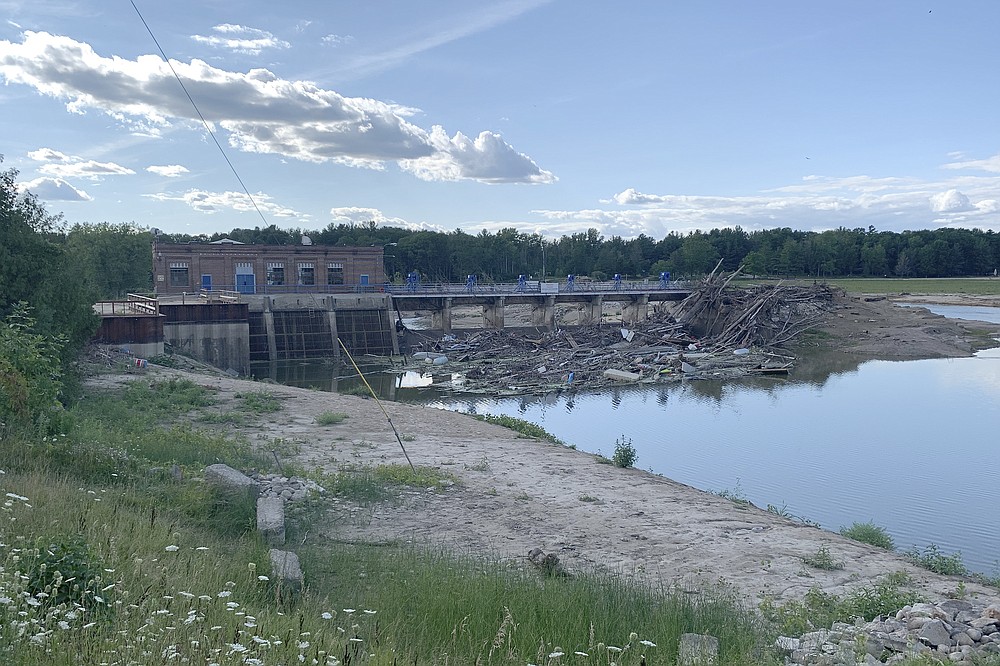 Debris rests at the spillway of the Sanford Dam in downtown Sanford, Michigan, July 30, 2020. The Four Lakes Taskforce wants to gain ownership of the Sanford Dam and three others after two of them failed in May, draining a string of lakes and flooding homes and businesses. (AP Photo/ Jeff McMillan) 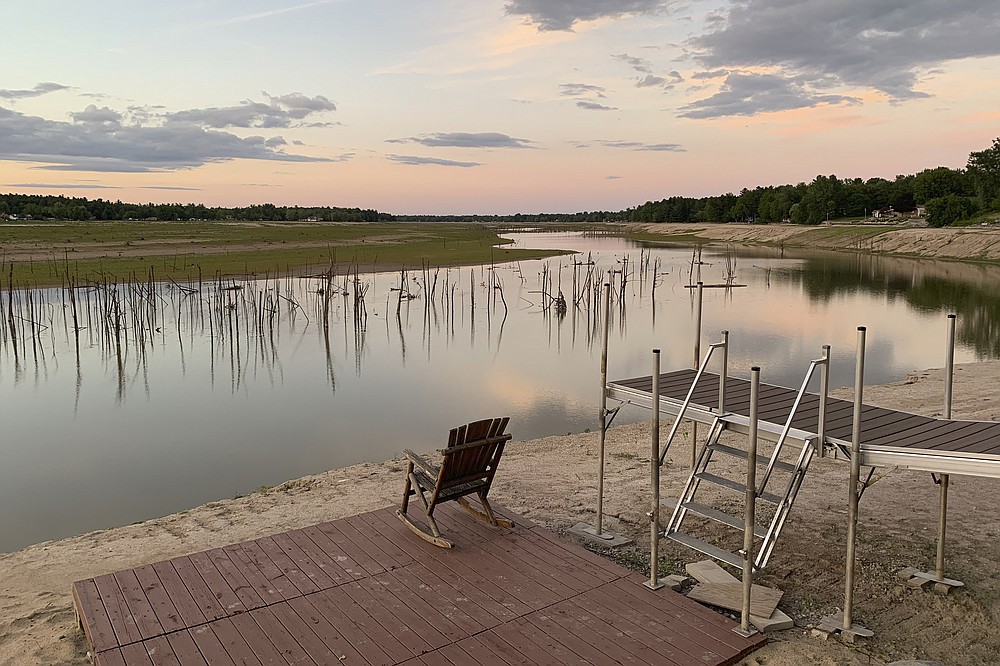 An empty rocking chair overlooks tree stumps, once submerged in Wixom Lake, at sunset July 30, 2020, near Edenville, Michg. Nature is returning to the dry beds of a string of mid-Michigan lakes that drained in May after two dams failed during torrential rains. (AP Photo/ Jeff McMillan) 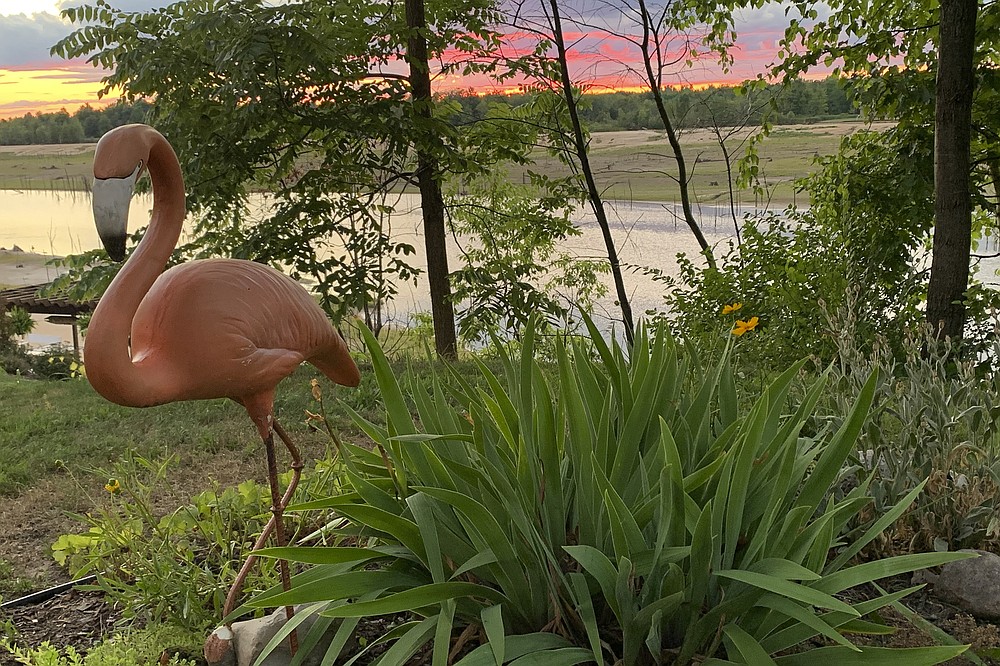 A lawn flamingo turns its back on an equally colorful sunset as the Tittabawassee River cuts a channel through the bed of what was once Wixom Lake near Edenville, Mich,., July 30, 2020. Nature is returning to a string of mid-Michigan lakes that drained in May after two dams failed during torrential rains. (AP Photo/Jeff McMillan)