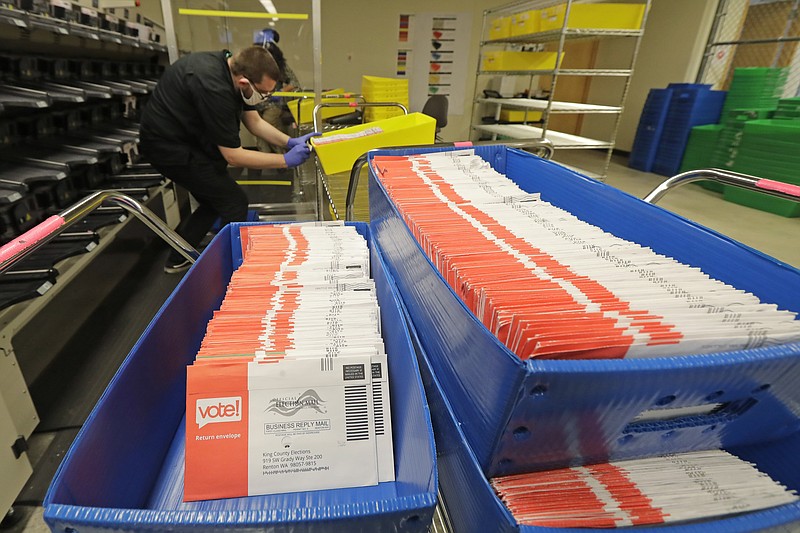 Vote-by-mail ballots are shown in sorting trays, Wednesday, Aug. 5, 2020, at the King County Elections headquarters in Renton, Wash., south of Seattle. Never in U.S. history will so many people exercise the right on which their democracy hinges by marking a ballot at home. (AP Photo/Ted S. Warren)

BOSTON -- Brace yourself for what's expected to be the first U.S. presidential election conducted mostly by mail. It could be messy.

Amid the coronavirus pandemic, voting by mail in a contactless and socially distant way seems like a no-brainer. States have made the option widely available -- only 10 now require voters to provide an excuse beyond fear of COVID-19 when requesting a ballot by mail -- and some three in four Americans are expected to embrace the option for the Nov. 3 presidential election, up from one in four in the 2018 contest.

But running a vote-by-mail election is surprisingly complicated, and there's a lot of room for things to go wrong. Validating and counting a deluge of posted ballots in an open and accountable way presents a major challenge, one that only about a half dozen states are fully prepared for.

It doesn't help that President Donald Trump has waged a vigorous offensive against the idea via a barrage of baseless tweets alleging the imminence of massive voting fraud. Turmoil in the U.S. Postal Service has only heightened concerns surrounding the ability of the nation's myriad election systems to manage a presidential vote.

Oregon, Colorado and Washington have held successful all-mail elections for years and others including Florida and California expanded capacity long before the pandemic. Nearly everywhere else, the technical and logistical challenges loom large for budget-squeezed election officials with limited experience.

Chaotic events during this year's primaries did not instill confidence. Untold thousands of absentee ballot requests went unfulfilled, and tens of thousands of mailed ballots were rejected for multiple reasons including arriving too late to be counted.

"The system is buckling under the weight of the dramatic surge and demand for absentee mail ballots," said Wendy Weiser, director of the democracy program at the Brennan Center for Justice. "It hasn't been built to withstand that high of a volume."

Among the major concerns:

-- Although Congress has sent $400 million to help states deal with pandemic-related pressures on election systems, it's well short of the estimated $2 billion experts say officials need to be ready for November.

-- Not all states are equal when it comes to letting voters fix mistakes that lead to rejection of their ballots, such as failure to sign the mail-in envelope. In a New Jersey special election in May, a whopping 10% of mailed ballots were rejected.

-- The rapid introduction of new technologies and processes in state voting systems heightens the risk of foreign interference and insider tampering. That's true even if simple human error or local maneuvering for political advantage are more likely threats.

-- The slower count of mailed ballots could clash with voter expectations of a clear Election Night winner. Election officials have already warned voters across the country that it could take days after the polls close to count all the votes.

-- In general, voting by mail is much less forgiving than the in-person method, where a voter's identity is verified on the spot and any difficulties can be handled by poll workers.

"The more complicated we make the ballot-casting process, the more stuff is going to go wrong," said Wisconsin activist Karen McKim. Election management in Wisconsin is as decentralized as it gets, relying as it does on 72 county clerks, 1,850 municipal clerks and thousands of poll workers. McKim says it's "unrealistic and unfair" to expect those workers to be ready for a flood of absentee ballots in just a few months.

Ahead of multiple primaries this year, some election administrators were buried under an unprecedented flurry of absentee ballot requests. Some blank ballots got misaddressed; others were lost.

In Georgia's Fulton County, which includes Atlanta and is the state's most populous, thousands of absentee ballots didn't reach voters until after the polls had closed, according to local news reports. Washington, D.C., voters were similarly afflicted.

In Wisconsin, requested absentee ballots never got to thousands of voters who asked. Jonas Zahn, a 46-year-old IBM executive, risked his health to vote in person on April 7 after twice requesting absentee ballots. "They still haven't come so they must still be in the mail," the Beaver Dam resident said in late July.

In Milwaukee, nearly 2,700 absentee ballots were never mailed because election staff goofed and halted a batch printing of mailing labels, the state election commission later reported. It was just one of multiple snafus.

Will the U.S. Postal Service be up to processing and delivering an election-eve flood of tens of millions of ballots? Under a major Trump donor named postmaster general in June, cost-cutting plans are already triggering delays in ordinary mail. A surge of mailed ballots could put the system under extraordinary strain.

Zahn, the Wisconsin voter, said his local mail is now routed through Milwaukee 50 miles away, meaning mail that reached a neighbor in a day or two a decade ago now takes about a week.

"The pipeline that moves mail between voters and election officials is very leaky," Charles Stewart III, a political scientist at the Massachusetts Institute of Technology, wrote in a 2010 study. In a July update, Stewart estimated that roughly 4% of mail ballots were lost through this process in the 2016 general election.

States including Wisconsin are now scrambling to add USPS "intelligent mail" bar codes to their systems so ballots can be tracked through the mail. In states including Florida, Ohio, North Carolina and Georgia, counties are adding ballot-tracking software that gives voters more precise ballot status all the way to election authorities, said Steve Olsen, CEO of BallotTrax, the leading provider.

But such measures aren't yet widespread.

In some states, voters who don't trust the mail can use drop boxes instead. But boxes have been vandalized and poorly secured. Some Republicans say they invite fraud. The Trump campaign is suing Pennsylvania over plans to use them in November.

Once a completed ballot arrives at a local election office, the voter's eligibility and identity must be verified. Sometimes, missing signatures or unsealed or damaged envelopes can gum up the process.

In Jefferson County, Kentucky, the state's largest, 3,848 absentee ballots were rejected in the June primary due to lack of a voter signature. That was out of roughly 180,000 absentee ballots cast. Not all states give voters a quick and easy way to fix these problems.

Veteran vote-by-mail states send out periodic mailers to verify voter addresses and get updated signatures. They also have built "ballot-curing" measures into existing systems in case voter signatures don't match what's on record or ballot envelopes arrive damaged or missing required information. But such systems are far from universal and their absence has led to lawsuits in some states.

The complexity of signature matching is a major issue. Many election offices register voter signatures from a variety of sources -- for instance, those scribbled with styluses on cramped touchscreens at motor vehicle departments. The result: A matching process prone to human error.

"It's terrible, but it's the best option we have," said Jennifer Morrell, a former elections official in Colorado and Utah. Rigorous training and bipartisan teams reviewing signatures can help mitigate some of the concerns, but people's signatures change over time and physical ledgers capturing these changes are an endangered species.

But the bigger risk is that first-time and minority voters -- who more often vote Democratic -- will have their signatures rejected, studies show.

University of Florida political scientist Daniel Smith found that Black and Latino voters and those under age 30 in the state were at least twice as likely as older and white voters to have ballots rejected over signature mismatches.

It took nearly two weeks for Philadelphia to count 140,000 mailed ballots after the June 2 primary. In New York City, it took six weeks after the June 23 primary to tally absentee ballots in one congressional primary where a dispute over ballots lacking postmarks ended up in federal court.

Ensuring a trustworthy chain of ballot custody and bipartisan oversight contributes to those delays. And sometimes insider fraud does happen. A former Democratic Pennsylvania congressman was recently indicted for it.

Which is why election officials including Neal Kelley, the registrar in Orange County, California, urge transparency measures for ballot counting such as live video streaming and obligatory audits.

Eighty percent of the county's residents voted absentee in this year's primary, up from 60% in 2018. Kelley said it took time to get all the pieces in place -- he's developed homegrown ballot-tracking -- to handle such capacity and instill voter confidence. 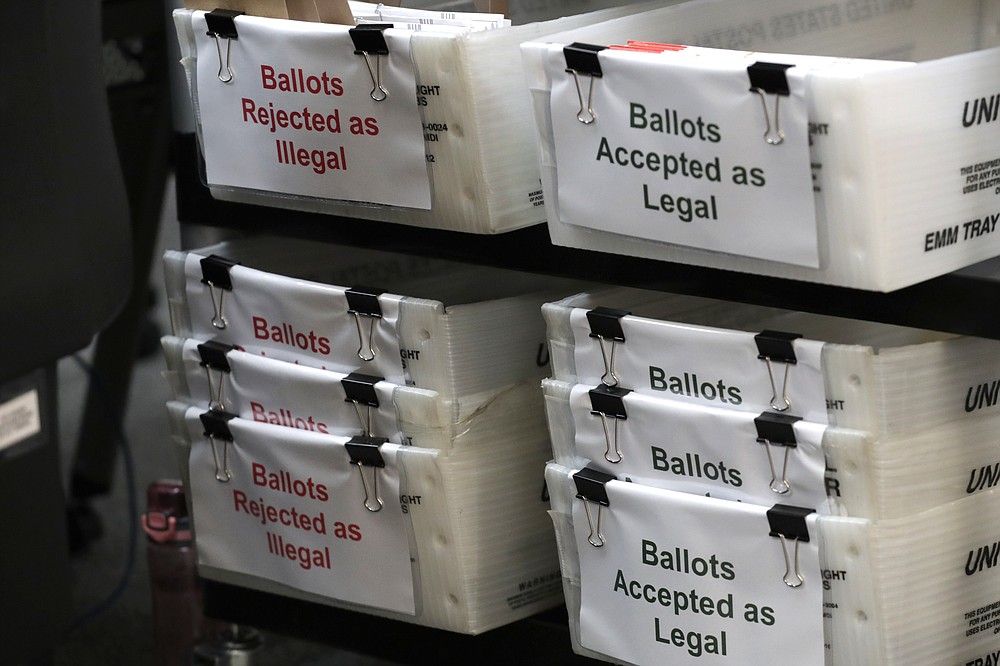 FILE - In this July 30, 2020, file photo, boxes for illegal and legal vote-by-mail ballots are shown as the the Miami-Dade County canvassing board meets to verify signatures on vote-by-mail ballots for the Aug. 18 primary election at the Miami-Dade County Elections Department in Doral, Fla. Never in U.S. history will so many people exercise the right on which their democracy hinges by marking a ballot at home. (AP Photo/Lynne Sladky, File) 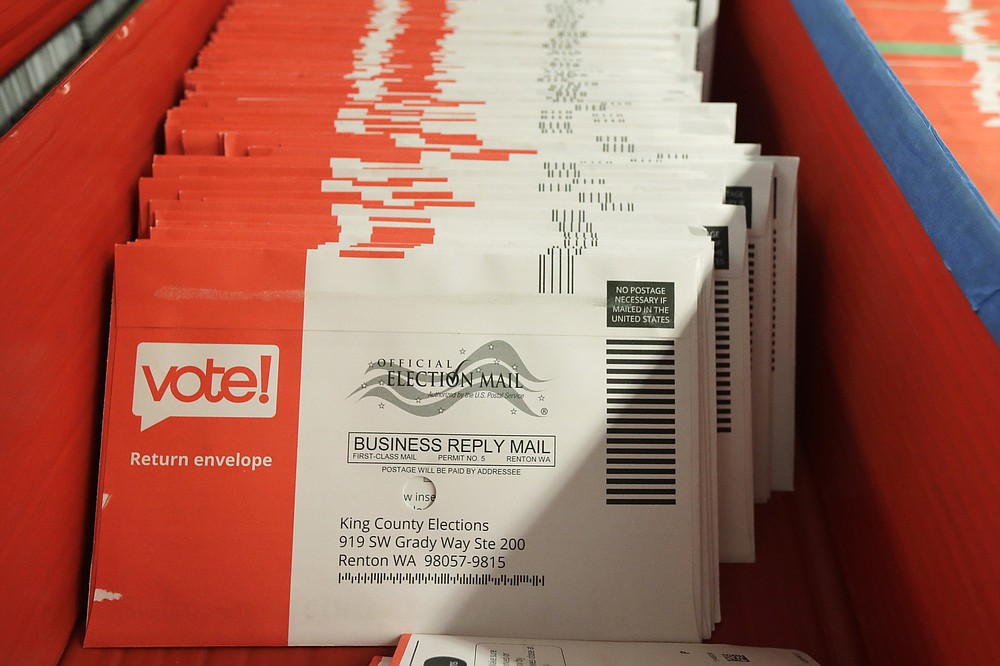 Vote-by-mail ballots are shown in a sorting tray, Wednesday, Aug. 5, 2020, at the King County Elections headquarters in Renton, Wash., south of Seattle. Never in U.S. history will so many people exercise the right on which their democracy hinges by marking a ballot at home. (AP Photo/Ted S. Warren)