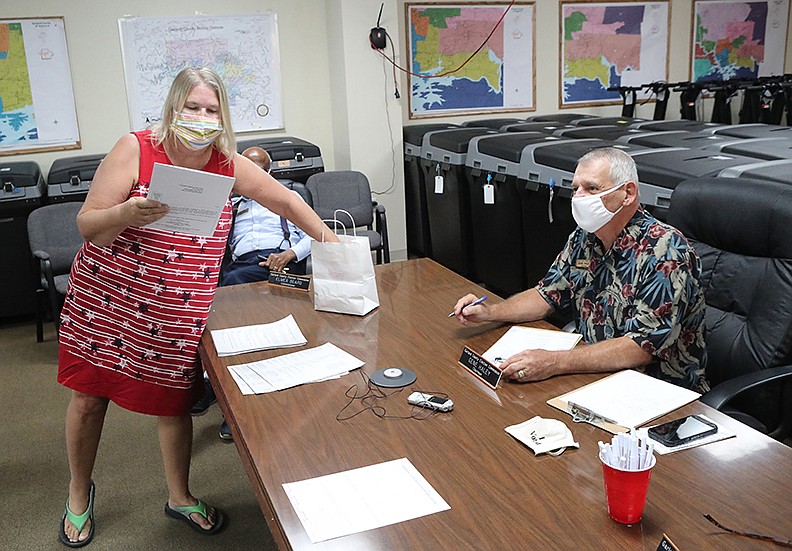 Kathy Edds, left, draws a ballot position for one of the 13 presidential candidates on the ballot for this year’s general election Friday as Garland County Election Commission Chairman Gene Haley looks on. - Photo by Richard Rasmussen of The Sentinel-Record

Per state law, absentee ballots the county clerk's office receives in the mail after 7:30 p.m. on Election Day won't be counted for the Nov. 3 general election, putting the onus on voters to get their ballots in the mail as soon as possible.

But Garland County Election Commission Chairman Gene Haley said Friday that voters can be assured their vote will count by casting a ballot in person at one of the seven early voting locations and 16 Election Day vote centers the commission established after Friday's ballot draw at the Election Commission Building.

"It's a lot simpler to go to the polls, show your ID, sign the tablet, go vote, stick it in the scanner, and you know your vote counted," he said. "When you mail a ballot in there's so many things that can go wrong."

County election officials expect 15,000 to 16,000 absentee ballots to be cast, a 1,000% increase from the number counted in the 2016 presidential election. Haley said the clerk's office has already received 3,000 applications. Ballots won't be mailed until Sept. 18, and voters will have to put their own postage on the return envelope.

"In the past we've never had enough to affect an election," Haley said. "If we have 15,000, that's one-third of our vote. We expect about 42,000 votes in this election. One-third could affect the outcome."

Absentee ballots could arrive before the mail-in deadline and still not be counted, Haley said, if the accompanying voter statement form is filled out incorrectly, or if a copy of a valid ID isn't included in the return envelope.

The governor signed an executive order earlier this month that allows election workers to begin processing the forms when early voting begins Oct. 19, giving counties an extra eight days to determine if an absentee vote will be counted. Haley said a team of 20 election workers led by former Election Commissioner Dennis Bosch will verify if the forms have been filled out correctly. The ballot-only envelope included with the return envelope will be set aside for counting on Election Day if the accompanying form meets the qualifications.

The state election code doesn't allow election workers to open the ballot-only envelopes until 8:30 a.m. on Election Day, making it unlikely the county's unofficial results will be available on election night.

"The reality is on election night we may not have an answer, because we have to count all these absentee ballots," Haley said.

Haley said polling locations will be set up and staffed in accordance with public health guidelines and directives. Poll workers will wear masks. Voters and touch screens will be properly distanced, with the latter disinfected after each use. He said the county has received all of the cleaning supplies and protective equipment allocated to it by the secretary of state's office, including KN95 face masks, face shields and disposable gloves for poll workers, social distancing floor decals and Plexiglas tabletop shields.

He said the 42,000 disposable styluses allowing touch-free voting have yet to arrive. Voters will use them on the touch screen and can keep the pens as souvenirs.

Hall B in the Hot Springs Convention Center will be used for early and Election Day voting. Haley said 15 touch screens will be set up in the 14,000-square-foot space. Voters will enter from the loading dock on Church Street. The convention center will be one of three new early voting locations, joining the four the county has used in recent elections.

For the first time, the county will have an early voting site inside Hot Springs Village at Unitarian Universalist Church, 403 Barcelona Road. First Baptist Church of Royal, 7402 Albert Pike Road, will also be a new early voting site. All seven early voting locations will be used on Election Day, with the convention center replacing the nearby Webb Community Center as an Election Day vote center.

The commission reduced the 25 vote centers it typically opens on Election Day to 16. It removed eight sites from the list last month. The list it approved Friday didn't include the Armory Building on Mid-America Boulevard, which has been used in previous elections.

Justice of the Peace 3

Justice of the Peace 4

Justice of the Peace 9

Justice of the Peace 10