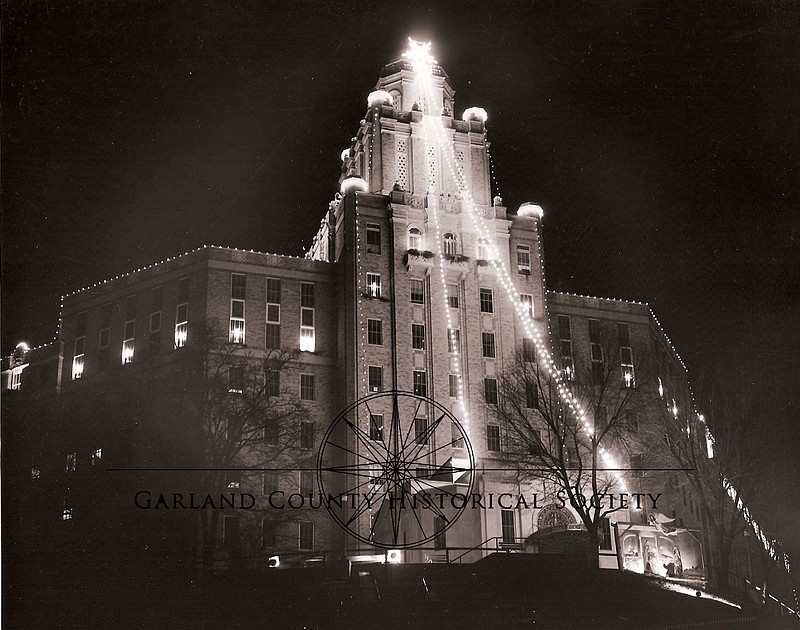 Singers in gleaming white vestments, holding candles, filed down the winding Hot Springs Mountain trail. On Arlington Lawn they took their places on a stage that, decked in evergreen, was built to resemble a large pipe organ. From a real organ, hidden among the greenery, music floated through the cold December night. On a high bluff behind and almost hanging over the singers’ stage, spotlighted figures acted out the Christmas story on a tableaux stage.

The program was created and directed for more than 30 years by Elizabeth Bowe Sims, the founder of the Choral Club. The club put on its first program in 1931 in the Hot Springs High School auditorium but by 1934, with the help of the Hot Springs Chamber of Commerce and the national park, our Christmas Eve celebration in the park had begun. The Arkansas Gazette called it the ‘best-known Christmas celebration of its kind in the country.” Starting in 1966, Hot Springs High School’s Choral Club and Thespian Club presented the music and tableaux.

Since 1939, Hot Springs has been home to another special Christmas celebration — the Christmas parade. The Pilot Club, led by Helen Blagg, sponsored the event for many years. The first parade, in addition to colorful floats, featured a “pet parade” that included birds, horses, a lighted cage with a dog, cat and rabbit, and a boy walking a turtle.

In 1941, Pearl Harbor was two weeks away, and our unsuspecting town was in a cheerful mood as more than 10,000 spectators lined Central Avenue to watch the parade. One of the floats celebrated the announcement that a $33 million dollar aluminum plant would be built at Jones Mill — it showed a gift package labeled “aluminum plant” with the card at the top declaring, “We got it!” More than 150 soldiers from the Army and Navy Hospital marched in the parade that, of course, included the Hot Springs High School Trojan Band. An annual highlight of the parade evening was the turning on of the Christmas lights downtown, sponsored by the Kiwanis Club.

Christmas parades were not held during the World War II years, but resumed in 1947. In some years, attendance was estimated to be 25,000, as groups competed to have the most splendid floats. Sponsorship was eventually taken over by the Jaycees, and, later, by the Oaklawn Rotary Club.

In the COVID-19 year of 2020, sadly, there will be no Christmas Parade. But our streets and national park will be illuminated by thousands of lights, and the animated Christmas trees on Arlington Lawn will lift our spirits. Garvan Woodland Gardens’ daytime Winter Garden Festival will celebrate the beauty of the season, families will decorate their yards and homes, and it will again be Christmas time in Hot Springs.