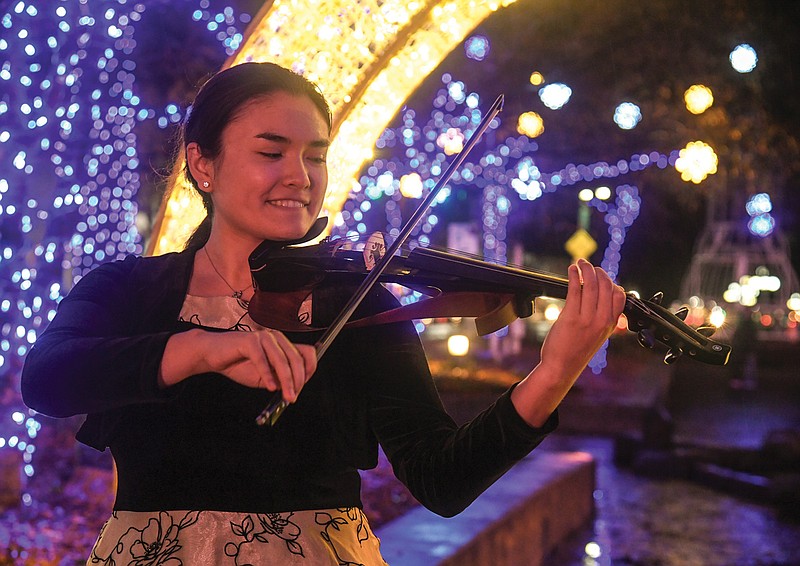 Violin teacher Krystyna Valdivia has her photo taken at Hill Wheatley Plaza.-Photo by Grace Brown of The Sentinel-Record

At 18 years old, local Krystyna Valdivia has spent the past 11 years growing herself as a violinist; achieving milestones like performing in Carnegie Hall and trying out for "America's Got Talent."

Valdivia began her journey in violin as a Lakeside fourth-grader with an interest in playing guitar.

"I was in fourth grade, going into fifth grade, and my mom said, 'There's an orchestra program at school that they're doing after school,'" she said. "I had always wanted to learn guitar just because every little kid wants to learn guitar, and I thought -- because I didn't know much -- that violin and guitar both have strings so they're similar, right? So I agreed to it and I met my first-ever teacher Mr. Keith (Klosky), who is still my instructor to this day, and I credit him with all the skill that I have, it all came from him."

Klosky would become the first of many teachers who carried Valdivia through her journey that is still in many ways just beginning.

As her interest in the art began to grow as a young girl, so did her drive for it, resulting in her taking action with her school's orchestra program.

"We didn't have the biggest orchestra program (at Lakeside), but when I was there around in middle school, my mom and I decided we wanted to start an actual orchestra program," Valdivia said "They had like an after school, learn violin for fun, kind of thing -- that's where I started -- so eventually we were like let's talk to some teachers and see if we can make an orchestra, so we finally did. It's really small, but it's still there.

"I went to a board meeting and I was like 11, and she had me play in front of board members, some kind of fiddle tune on my violin to impress them. I didn't know how big of a deal it was back then, but looking back on it I should have been nervous."

But her action in carrying out her passion didn't stop there.

"I've done talent shows," Valdivia said. "I've done a lot of my school talent shows to the point where they told me to stop competing, and I said OK, I'll just play for fun, I don't even want to compete. And I got to represent my school at the Garland County Talent Show two years in a row. I got fourth place the first year, and then I won first place at the Garland County Talent Show, that was in the newspaper. That was a lot of fun, that was a big turning point."

Perhaps the many school talent shows she competed in were mere practices for two of the bigger "talent shows" to come.

"I did cross off two things on my bucket list last year, or two years ago," she said. "I went and I auditioned for the honors performance series, which is an international competition to get students who play orchestra instruments, to come together in New York and play in Carnegie Hall. And I won that after trying for four years I finally made it in and I got to go to New York and perform in Carnegie Hall with the best musicians around the world around my age, and it was crazy.

"And then later that year I auditioned for a reality TV show called 'America's Got Talent.' ... My mom and I drove up to Nashville and just had an awesome experience. I got to be on TV -- I didn't audition on TV -- but I got to be in the credits. ... It was just a fun experience."

A few other things Valdivia said she would like to cross off her bucket list is playing on a cruise and as a street performer at Disney World. While the pandemic has put a halt on these plans, for now Vadivia's stage is set to the streets, establishments and events of Hot Springs.

"I've done events from weddings to open houses, to fundraisers, to just playing on the block," she said.

During a street performance in downtown Hot Springs prior to her interview with HER Magazine, Valdivia had a local restaurant owner come by and offer her a gig to play at his restaurant. While she enjoys playing in restaurants, she said her restaurant opportunities have slowed since the start of the pandemic. Nonetheless, she keeps business cards on hand for moments like that. For any local establishment interested in booking Valdivia, she can be reached via phone at 501-282-4627, or via email at [email protected]

When asked what she wants people to know before hearing her play, she said "I let them know I'm unconventional, I'm unordinary; I don't do what you expect."

"When I tell people I'm a violinist," she said, "they think 'Oh, you know, playing classical music at weddings,' and I do, but most of the stuff I love is not what you think. I'll play rock songs, electric, pop, dub step. I like to be unexpected; give people what they don't expect."

Valdivia also plays with her two sisters Anna, 11, and Teresa, 22, on occasion. At the start of the pandemic, they conducted a YouTube Live concert for family and friends to lift the spirits. Two of the most "2020-esque" songs Valdivia said she could think of were "Rain on Me" by Ariana Grande and Lady Gaga, and "Waiting for Love" by Avichi.

"'Rain on Me' by Ariana Grande and Lady Gaga seems to be a pretty good 2020 song," she said. "It's saying, 'At least I'm alive,' and I think that's a pretty fitting anthem, and it's upbeat. But on kind of a more serious note, I think it's 'Waiting for Love' by Avichi. It's a really pretty song and saying, 'Oh we're waiting for love to come and waiting for kind of calmer and peaceful times.'"

Now, in her third semester at Henderson State University, she is pursuing a "quite fitting" degree in music education.

"Of course it's not a super steady job to just get paid for performing, so I'd like to go into education," she said. "I'd like to go back to Lakeside to make sure the orchestra is still doing well. I have had several private students I have taught on the side. They're always little kids, like 10-year-olds, and mom wants them to start violin, and I have a lot of fun with them. I like to spread that joy to the kids as well if they really like violin, or cello, or viola. I really hope that I can get students to love to perform as much as I do. That's my goal if I become a teacher."

"Both my parents are teachers as well," she continued. "My dad teaches Spanish (at Arkadelphia High School) and my mom is a professor right here at ASMSA (Arkansas School for Mathematics, Sciences, and the Arts) and they're probably one of the main reasons I've become a teacher because they're always in teacher mode with us, so I kind of know-how to approach the students."

In this teaching approach, Valdivia said she would like to teach her students the importance of finding a passion and holding onto it.

"It's not even just violin ... but it's just to find a passion and hold onto it as long as you can because, I mean it might change," she said. "Violin is my passion and thing that I want to strive on for the rest of my life, but maybe for someone else it's art, maybe it's; it doesn't have to be violin, but I do want to let my students know they have to stay persistent, and they have to have that ambition for something they really love, so that's something I try to spread to my students."

Her assurance in her passion is what motivates her to persist, even when it's hard to pick up the violin and practice.

"I want to do this for the rest of my life ... (but) specifically now, with the pandemic and everything, it's kind of hard because I don't get as many gigs or performances," she said. "I did find that I can play downtown socially distanced and stuff, but now it's harder because of the pandemic and because I have a lot of homework and stuff; finals coming up. So it does get tough because things get busy or of course the pandemic.

"I have gone weeks at a time without playing, especially when it was super busy. I think, well I can't remember the last time, but there's definitely been weeks, like in high school and stuff, when I couldn't play. Now that it's kind of my, it's my major, I find myself playing more and more, which I like."

In addition to motivation, inspiration from others has also kept her going.

"My mom ... is probably my biggest inspiration because she's the one who pushed me at the beginning," she said. "After I learned violin is not like guitar I did want to put it down a little bit a few times; I didn't want to wake up for rehearsal. And she's the one who drove me everywhere because I couldn't drive. ... I also have to thank a teacher that I had; Brittney Osmond. She's the reason I got out and started performing. I did learn how to play violin from Mr. Keith, but she took me to weddings. ... She offered me jobs, as a teacher, to play at weddings. ... She pushed me as well and told me to go play wherever I can. ... I owe a lot of my persistence in going out and getting gigs to her."