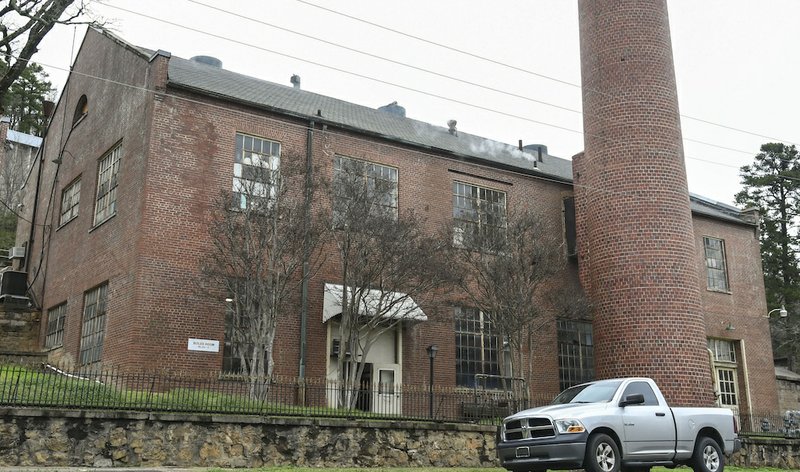 Underground storage tanks at the Arkansas Career Training Institute's heating plant are a cause of concern, according to a report issued in December. - Photo by Grace Brown of The Sentinel-Record.

Soil on the campus of the Arkansas Career Training Institute may contain harmful substances, according to a report from a preliminary investigation into potential or existing environmental liabilities.

Possible soil or groundwater contamination from storage drums and underground fuel tanks were among the recognized environmental conditions, or RECs, FTN Associates listed in its December report to the state, according to segments The Sentinel-Record obtained through a public records request.

The phase one environmental site assessment apprises future tenants of liabilities that need further examination. The report FTN sent the state in December recommended subsurface investigations be done at the heating plant, gas and oil station and a storage area that contains a waste incinerator. An inventory of numerous drums containing petroleum products or other hazardous materials should also be done, the report said.

"Upon completion of the waste inventory, waste profiles should be developed for the materials and the waste properly disposed of at an offsite facility," the report said, noting a drum outside a storage facility appeared to be leaking oil.

Arkansas Rehabilitation Services, the state agency that oversees the Arkansas Career Training Institute, or ACTI, said it doesn't know what's inside the drums. The report said ground near the drums has likely been affected, given the poor condition of the drums and their prolonged exposure to the elements.

"The drums were in low foot-traffic areas, away from buildings where student instruction occurred," ARS said in an email.

ARS said to its knowledge none of the underground tanks on campus contain fuel.

The federal government is expected to take possession of the former Army and Navy General Hospital in July. It had been the flagship building on the more than 20-acre Reserve Street campus that, until September, provided vocational training in a residential setting for young adults with physical, psychological and learning impediments.

ARS announced the end of the campus' residential program in May. ACTI's remaining services will be provided in the Armory Building at 200 and 212 Reserve St. after the federal government takes possession of the hospital building and dozens of outbuildings on the southern slope of Hot Springs Mountain, ARS said.

Local government, civic and business leaders have been working to secure a new tenant for the building since the state announced its departure. No funding is in place beyond June 30 to secure the campus or keep the utilities on at the more than 200,000-square-foot hospital building that opened in 1933.

"We had a call even today on it even though it ran three weeks ago," Gary Troutman told justices of the peace. "We're trying everything we can. The clock is ticking, and we know it. We're trying to move quickly."

ARS said the waste incinerator referenced in the report was used to dispose of medical waste. Residual ash may have entered shallow levels of the soil, the report said.

"The incinerator has not been used for some time," ARS said. "When it was in use, it had an (Arkansas Department of Environmental Quality) certificate."

Air compressors, backup generators, elevator equipment and other large equipment in the laundry, gas and oil station and body and fender building are leaking oil that's stained the floor and may have seeped through to the ground, the report said. Containers of paint, gasoline, oil and other materials are leaking and may have also absorbed into the ground.

The end of the residential program shed more than 100 jobs from the local economy. ARS said last week that a staff of 38 remains on campus. They are providing career and technical education, pre-apprenticeship/registered apprenticeship, vocational rehabilitation supports and other vocational-rehab based instruction, ARS said.

A company has been contracted to provide round-the-clock security for the campus through June, ARS said.