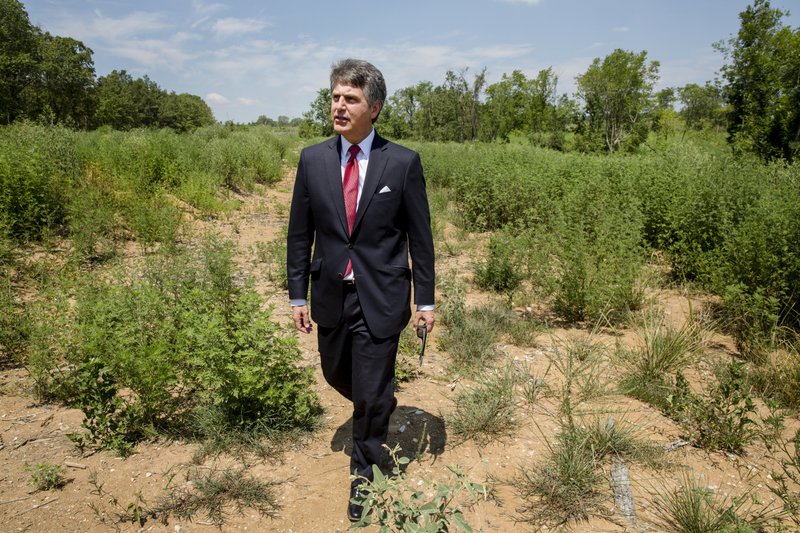 FILE - In this July 25, 2018 file photo, Stephen Bell, president and CEO of the Arkadelphia Regional Economic Development Alliance, shows parts of the 1000-acre site that he hoped would be a $1.8 billion Chinese paper mill in Arkadelphia, Ark. On Monday, Feb. 10, 2020, it was reported that Arkadelphia plans to pitch the site to other industrial prospects amid growing signs that the mill project's future is at risk because of trade tensions. (AP Photo/Karen E. Segrave, File)

LITTLE ROCK -- A community in southwest Arkansas plans to pitch a site it has been holding for a $1.8 billion Chinese paper mill to other industrial prospects amid growing signs that the project's future is at risk because of trade tensions.

Sun Paper announced in 2016 it would build a facility on the 1,000-acre site in Arkadelphia in 2016. The project has since faced uncertainty because of President Donald Trump's ongoing trade dispute with China, so the Arkadelphia Regional Economic Development Alliance decided to market to other prospects.

"We just didn't want to wait a year or longer to see if a trade agreement is signed," said Stephen Bell, the alliance's president and chief executive officer. "We feel like we should be proactive and market the site to industrial prospects and see what we get."

Bell said the alliance hasn't given up on the project, but that Sun Paper officials told them during a visit to China in October that the mill was on pause because of the trade dispute. He said the site, which has already undergone engineering work and received water permits, could be attractive to another large project.

The alliance's decision was first reported Monday by Arkansas Business.

State officials said Arkansas and the company remain committed to the project about 65 miles southwest of Little Rock, Arkansas.

"While there have been delays due to multiple factors in China, we anticipate them moving forward with the project," Secretary of Commerce Mike Preston said in a statement. "The community has been supportive and patient and understandably wants to be prepared for other opportunities."

Gov. Asa Hutchinson said Sun Paper is committed to the project, noting that the company completed engineering work that led to the issuance of an air permit for the mill last year. But he acknowledged that trade tensions and tariffs disputes have led to delays.

"There has been no state incentive money going into the project to date and nothing will be at risk for the state except the possibility of missed opportunity," Hutchinson said in a statement. "I understand the need for Clark County to look at alternatives for the site and the exact timing of the project will depend upon the global economic and trade climate."

Local government had used revenue from a half-cent sales tax in Clark County to buy the site, located about 5 miles south of Arkadelphia. In 2017, officials said they expected the mill to create hundreds of jobs and employ 2,000 people during its construction. State incentives included $12.5 million for site preparation and equipment, and up to $3 million in workforce training funds.