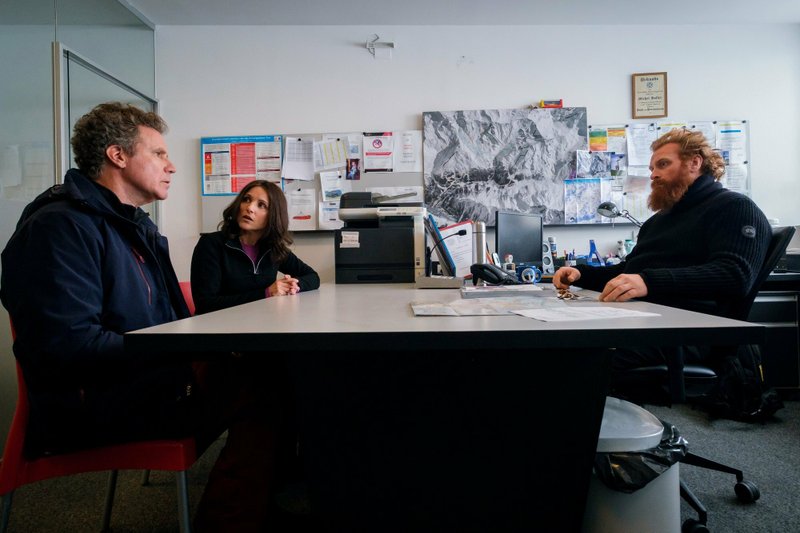 This image released by Fox Searchlight shows Will Ferrell, left, Julia Louis-Dreyfus and Kristofer Hivju in a scene from &quot;Downhill,&quot; a remake of the Swedish film &quot;Force Majeure.&quot; (Jaap Buitendijk/Fox Searchlight via AP)

"Downhill" skies into theater just days after the historic Oscar victory for Bong Joon Ho's South Korean thriller "Parasite," which for a moment anyway, smashed what Bong called "the one-inch barrier of subtitles." With so many international films so readily available today, the need of an English-language facsimile is more questionable than ever.

And yet, the notion of pure "originality" doesn't really wash for the movies, the most ravenous and protean of art forms. Hollywood has always hunted high and low for good source material, affixing itself to all manner of books, plays, toy lines and classic films like -- you might say -- a parasite. Sometimes the results are cynical, sometimes they're grand. Easy as it may be to turn one's nose up at foreign-language film remakes, that also means shunning, for example, the delights of "The Birdcage" and possibly the greatest comedy of all time, "Some Like it Hot."

Both of those movies point to what can make such remakes not only work but come alive: insanely good comic performers and brilliant writers. In the case of Mike Nichols' "The Birdcage," Robin Williams and Gene Hackman, from Elaine May's adaptation. "Some Like it Hot," penned by the great duo of Billy Wilder and I.A.L. Diamond, had Tony Curtis, Jack Lemmon and Marilyn Monroe. Not shabby, either lineup.

And if you're going to Americanize a European film, you can't do much better than put Julia Louis-Dreyfus and Will Ferrell in it. Their presences, alone, remake any movie in their singular comedic styles, which before now have never joined together. "Downhill," too, comes with talented comedy minds behind the camera in directors Nat Faxon and Jim Rash (writers of the Oscar-winning script to "The Descendants"), who co-wrote the adaptation with Jesse Armstrong, the mind behind HBO's "Succession."

"Downhill" takes the basic shape of Östlund's film. A family of four (this time visiting from America not Sweden) are in the Alps for a ski vacation when an intentionally set off avalanche begins tumbling down the mountain. The family appreciates the sight from the deck of a ski lodge before, as the snow barrels closer, panic sets in. The husband, Pete (Ferrell), grabs his phone and runs away while the wife, Billie (Louis-Dreyfus), desperately clutches their two sons.

Even if you didn't see "Force Majeure," you might remember the original scene; it became a widely spread meme last year. It was a glorious shot and a moment of terror that, for the family of "Force Majeure," afterward cleaved open the cracks and fissures of a marriage while burrowing into the existential comedy of monogamy and gender roles.

"Downhill" does much the same, with a little less discomfort and a little more -- but not a lot more --broad, "European Vacation"-style humor. After the avalanche, Billie is increasingly apoplectic, furious at her husband's cowardice and newly uncertain about their marriage's future. Pete at first refuses to admit anything happened, a denial that crumbles in a withering scene in front a visiting couple (Zach Woods, Zoë Chao).

It would be easy to say "Downhill" lacks the nuance of "Force Majeure," but Östlund's film wasn't perfect, either. Like his "The Square," it makes cutting but imprecise stabs at irony and satire, and never quite lives up to its spectacular beginning. It's the better film, sure, but the pleasures of watching Ferrell and, in particular, Louis-Dreyfus in "Downhill" shouldn't be minimized.

Ferrell's presence slightly shifts the film's dynamics. In "Force Majeure," the polished veneer of the husband (Johannes Kuhnke) breaks apart. But Ferrell has spent decades lampooning and hilariously, perceptively deconstructing masculinity. He might know these slopes too well. Ferrell is here ably, convincingly playing more down-to-earth than his usual screen presence, but the part might have called for an actor less obviously in tune with male fragility.

Still, it's a kind of perfect role for Ferrell, one that trades on both his comedy persona and his less often seen dramatic skill, notably displayed in the Raymond Carver adaptation "Everything Must Go." He and Louis-Dreyfus are terrific together, and "Downhill" is sustained by their chemistry.

There's not much left to be said about Louis-Dreyfus, who also produced "Downhill." Her talent remains, in her first post-"Veep" project, extraordinary. From "Seinfeld" to "Veep," I think Louis-Dreyfus' greatness lies in her ability to savagely skewer the ridiculousness of the men around her while simultaneously lampooning herself.

Print Headline: 'Downhill' film, a showcase for Louis-Dreyfus and Ferrell