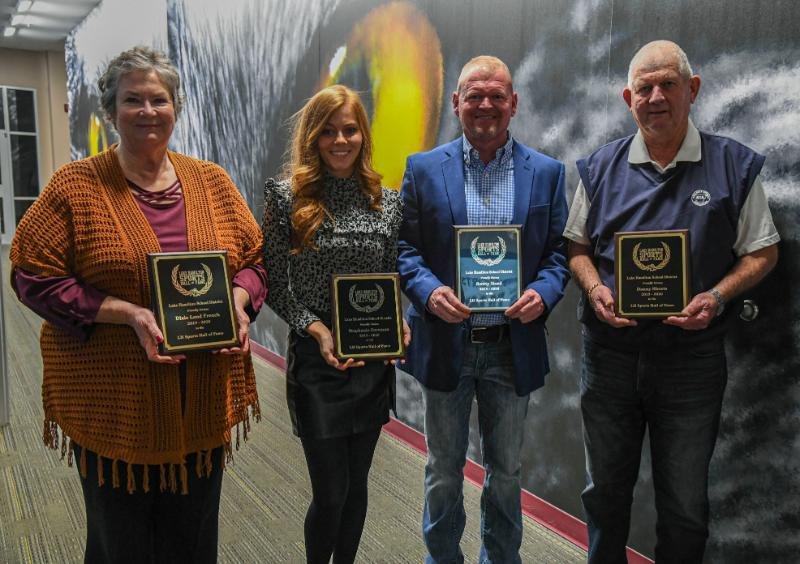 PEARCY -- Stephanie Foreman, Dixie Land French, Danny Sheets and Scotty Steed were the members of the second class of inductees into the Lake Hamilton Sports Hall of Fame at Alumni Hall inside Wolf Arena on Tuesday night. The inductees received plaques to recognize their achievements as student-athletes.

A 2008 graduate, Foreman reached many highs as she established records in pole vaulting that were unmatched by other Lady Wolves until Edie Murray, a freshman at the University of Arkansas, broke Foreman's school record of 13 feet, 6.25 inches, setting a new high of 13-6.50.

"I didn't think that I would get in this soon because I'm one of the youngest ones in there," Foreman admitted. "It's awesome just to have made such a big difference here. To set that bar and have girls look up and be like 'I wanna do that. I wanna reach that, I wanna beat that, I wanna go.' Edie broke my record last year, and everyone was like, 'I'm so sorry,' and I said, 'No, that's awesome. That's exciting to see people reaching for it, doing better and going places.'"

"[Sanders] was almost like a father figure to me," she explained. "He was there every step of the way, making sure I got as far as I could possibly go with it. Those two were really big supporters."

"[The induction] means a lot," she said. "It's been almost 50 years and then it brings back a lot of memories, being able to see my coach [Tommy Barret] here, too.

"I had neighbors who would come watch and tell me how good I was -- whether I was or not. I'm proud of what I was able to accomplish here. I loved basketball."

Before coaching at Lake Hamilton from 1983 to 1988, Sheets set a school record of free throws made in a single game, making all 25 of his attempts, earning All-District and All-State honors.

One of his most memorable moments while at Lake Hamilton was helping the Wolves earn the team's only state basketball title at Barton Coliseum in Little Rock.

"It's always nice to come back to the high school you attended and be honored for maybe some achievements you accomplished. I don't know if I only made but one shot in my sophomore year as a starter, but it was at a pretty critical time. Fifty-four feet and end of the second overtime, tipped over the game."

Steed, a member of the class of 1986, was a three-sport athlete -- basketball, track and field, and football -- setting multiple records, including 3,400 career receiving yards and 54 touchdowns.

"...We had a close knit group of kids. The student body wasn't near as big. People seemed to be a lot closer, and we hung out in summer. Hunt and fish in the winters and played a lot of good football, a lot of good sports."