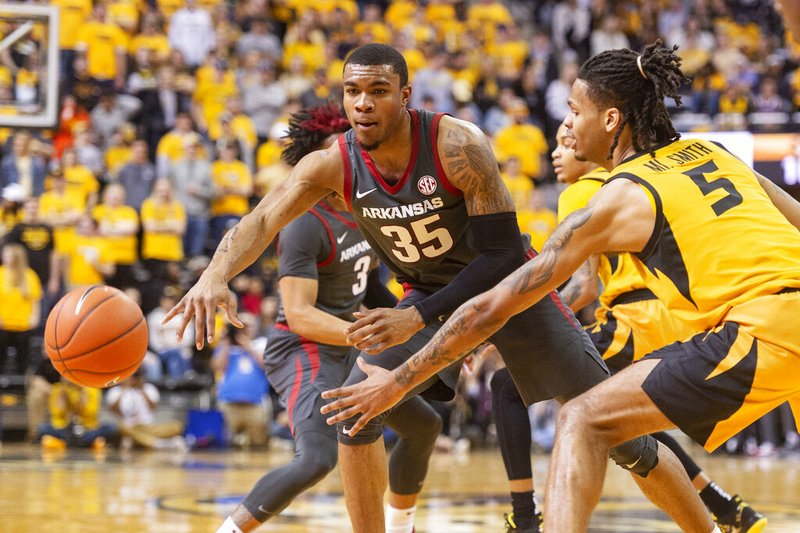 Arkansas' Reggie Chaney, left, passes the ball past Missouri's Mitchell Smith, right, during the first half of Saturday's game in Columbia, Mo. - Photo by L.G. Patterson of The Associated Press

KNOXVILLE, Tenn. -- The first true stinker of the year has University of Arkansas hoops in a funk.

The Razorbacks were outrebounded 40-29, beaten in second-chance points 13-8 and outshot by a wide margin in an 82-61 loss to Tennessee on Tuesday.

It must have felt more like Knocksville on the edge of the Great Smoky Mountains for the Hogs, who had not been clobbered in this manner all season. The 21-point losing margin against the Volunteers equaled the Razorbacks' three previous worst losses this season combined.

The same for Arkansas coach Eric Musselman, whose last such loss came in an 85-58 defeat for Nevada at New Mexico on Jan. 5, 2019, in Albuquerque, N.M.

So now the Razorbacks face a most critical juncture with their NCAA Tournament chances dwindling by the day. Mississippi State, which downed the Razorbacks 77-70 on Jan. 22, comes into Bud Walton Arena on Saturday for a noon game. The Bulldogs (15-9, 6-5) have won six of their last eight Southeastern Conference games.

The Razorbacks have lost six of their last seven in league play.

"The state of the team is going to be what it's like at the end of that score against Mississippi State," said guard Jimmy Whitt Jr., who led the Razorbacks with 19 points at Tennessee.

Musselman was clearly frustrated Tuesday night with things both large and small, like simply catching and holding on to the ball or playing defense without fouling.

"We're struggling on both ends of the floor right now for sure," Musselman said.

Tennessee's rebounding margin of plus-11 marked the ninth time an opponent had beaten the Razorbacks on the boards by 10 or more rebounds.

In SEC play, Arkansas has been outrebounded by 10 or more seven times in 11 games. The Razorbacks' minus-10.9 rebound margin in league games is four worse per game than Vanderbilt, which is second-to-last in conference play.

"Like the rebounding is just a broken record," Musselman said. "I mean we need to rebound at all positions and we're not. We get outrebounded every night.

Musselman did not want to get into what is affecting leading scorer Mason Jones, who shot 1 of 10 from the field, did not start and did not return to the game after committing a turnover at the 12:57 mark of the second half.

Jones has made 4 of 24 shots in the last two games after connecting on 22 of 44 in the two games before that.

When asked if it was important for Jones to get back on track for the Razorbacks to break out of its slump, Musselman said, "Oh yeah, we need everybody to play well offensively. We need Jimmy to play good. Desi [Sills] didn't shoot the ball well. We lack perimeter shooting without Isaiah [Joe]."

Musselman added, "The only thing I know to do is just continue to try to work.

"We don't have all our stuff in obviously as a new coach and a new coaching staff. So we've just got to try to get ready for our next game on Saturday. That's all we can do."

Whitt thinks Saturday's home game against Mississippi State, which was drubbed 83-58 at Ole Miss on Tuesday, will be a good barometer. The Razorbacks have lost three consecutive SEC home games for the first time since the 2011-12 season.

"We'll be able to tell what kind of team we are, if we still have fight left or if we decide to go a different way," Whitt said. "But I don't think we will. I think this is a group that's going to find a way to get it done, some how, some way."