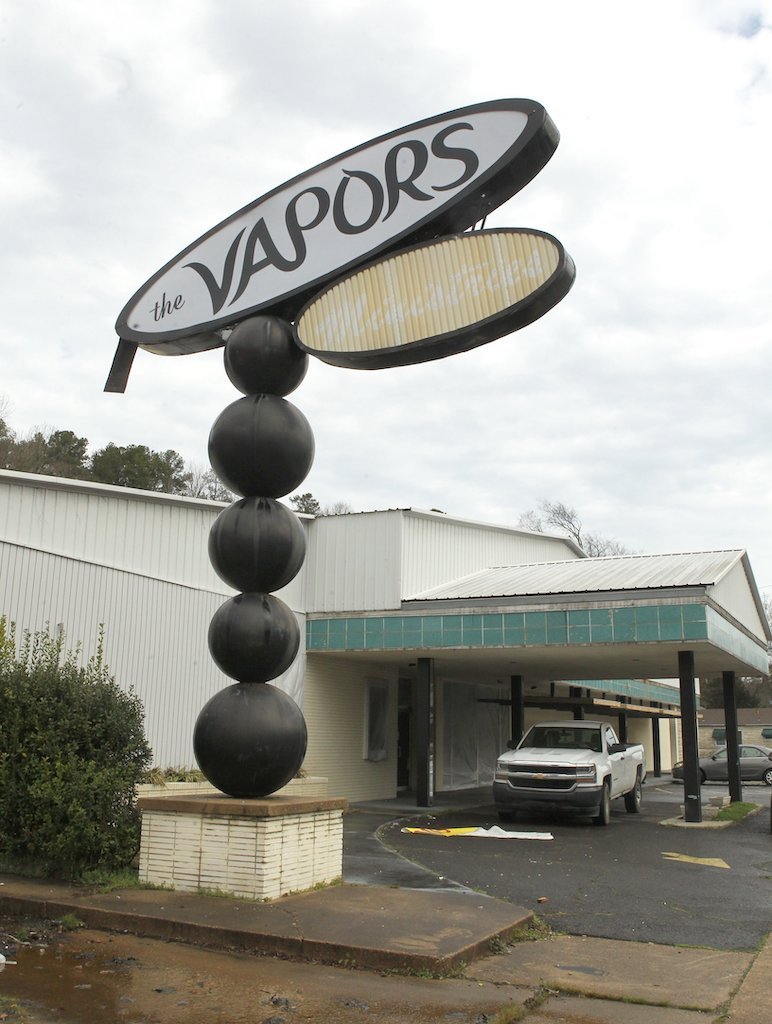 The Vapors after a new sign was installed in March 2019. - File photo by Richard Rasmussen of The Sentinel-Record

The classic music venue The Vapors is open for business again with a concert booked for this Friday.

Friday's Motown-inspired show is the first of what event organizers hope to be many shows in the future.

The Best of Motown, a show where singers perform the classic hits of record label Motown Records, will start at 7 p.m. on Friday. Tom Wilkins, executive manager of the Legendary Vapors, said the show has two levels of seating. The ground level tickets are for both the show and a catered meal.

All the tickets for the show and meal have already sold out, Wilkins said, and the second level tickets which are just for the show, are also almost sold out. "Still have less than 30 general admission tickets ... seven-eighths sold out," Wilkins said. "We're extremely happy."

Wilkins said the opening comes after two and a half years of work that started when Jimmy Miller bought the venue. On why he bought the building, Miller said, "I just liked the history of it. This end of town needed something that will hopefully (help) this part of town."

Miller said after he bought the place, Wilkins contacted him about helping. It initially did not lead anywhere, as Miller discovered it would take a lot of effort, and money, to bring the old building up to code, including installing a sprinkler system.

"The sprinkler system took a while; extremely expensive. This building is massive," Wilkins said.

Once the building was brought up to code, Miller contacted Wilkins again in November. Since then, the two have worked toward an opening date.

Wilkins said construction on the building originally started in 1959, and it opened on July 22, 1960. Over the next few decades, numerous celebrities performed on the stage such as Liberace, Phyllis Diller and Edgar Bergen. Wilkins said he attended a Roy Clark concert at the venue in 1979.

Seeing the old building restored is fun, he said, noting the theme of the place is "Our history is our future." Wilkins said the history of the venue is a big selling point and they are trying to make the building look like something from the 1960s era, "with a dose of 2020."

Wilkins said they have more plans for the large building which once also housed a place called the Cockeyed Cowboy, noting Miller plans to convert this area into a dining room. Once they are finished working on the inside of the building, they will remodel the outside of it, he said.

Several other acts are already booked for the Legendary Vapors including Sarah Haman, who will perform the music of Patsy Cline on Feb. 21 and 28, and Colt and the Old 45s, who are booked for April 18.

On Feb. 22, "On the Air: A Tribute to Bob Hope and Radio Stars" will be performed, which Wilkins said is a re-enactment of Hope's radio show from the 1940s. He said the show is "in honor of the 75th anniversary of the ending of WW2."