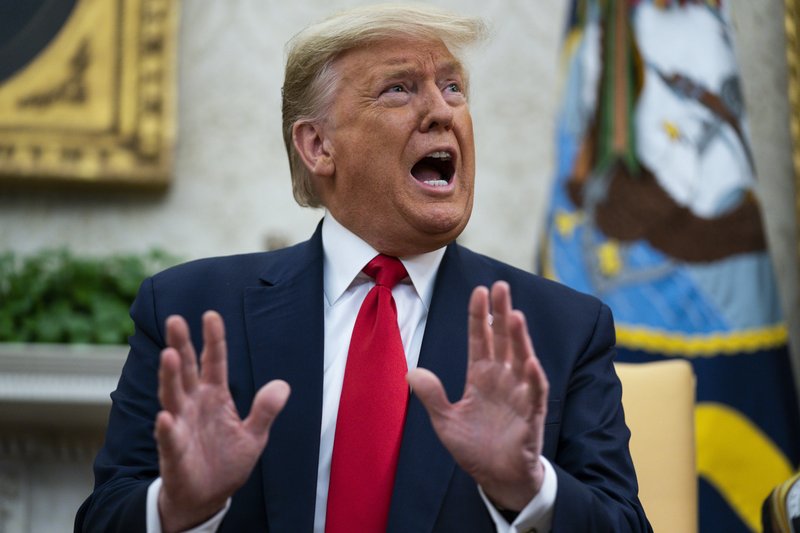 President Donald Trump speaks during a meeting with Ecuadorian President Lenin Moreno in the Oval Office of the White House on Wednesday in Washington. - AP Photo/Evan Vucci

WASHINGTON -- Pro-Donald Trump groups raised more than $60 million in January and have more than $200 million on hand for this year's general election, shattering fundraising records on the path toward a goal of raising $1 billion this cycle.

The Republican National Committee and the president's campaign have raised more than $525 million since the start of 2019 together with two joint-fundraising committees. The RNC and the Trump campaign provided the figures to The Associated Press. The January haul coincided with most of the Senate's impeachment trial, which resulted in the Republican president's acquittal earlier this month.

RNC Chairwoman Ronna McDaniel said, "We already have 500,000 volunteers trained and activated, and this record-breaking support is helping us grow our grassroots army even more."

"With President Trump's accomplishments, our massive data and ground operations and our strong fundraising numbers," Parscale said, "this campaign is going to be unstoppable in 2020."

The pro-Trump effort said it has gained more than 1 million new digital and direct mail donors since Democrats launched their push to impeach Trump in September 2019. The investigations proved to be a fundraising boon for Trump's campaign, even as the president was personally frustrated by the scar it will leave on his legacy.

The Trump team's haul and cash on hand were twice that of former President Barack Obama's campaign and the Democratic National Committee at the same point ahead of his 2012 reelection.

Trump marked the fundraising success Thursday with his inaugural visit to his campaign headquarters in Arlington, Virginia, to thank staffers on his campaign. The campaign said Trump walked through the office, greeted staff and offered words of encouragement.