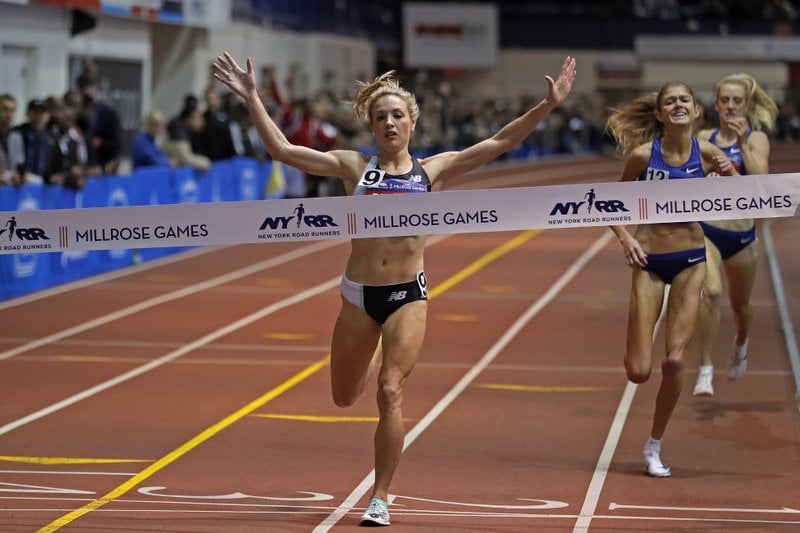 Elle Purrier reacts after winning the NYRR Wanamaker Mile at the Millrose Games track and field meet Saturday in New York. - Photo by Adam Hunger of The Associated Press

The determination of Elle Purrier to churn through the last lap on her way to breaking an American indoor mile record last weekend can be traced to many, many things.

Like growing up on a dairy farm in Vermont, where she milked 30 cows at the crack of dawn before heading to school.

That work ethic has spilled over into her running career.

She's definitely on the radar in the world of track after eclipsing Mary Slaney's long-standing American indoor mile mark at the Millrose Games. Purrier will be a top contender in the 1,500 meters at the U.S. indoor championships this week in Albuquerque, New Mexico, and definitely one to watch heading into the Tokyo Olympics.

For that, she credits those farm roots.

"It built the base of who I am," said Purrier, who turns 25 next week and has "Yes, I grew up on a dairy farm in Vermont" as part of her Instagram description. "Just growing up in that community and in that setting -- people work really hard. My family worked really hard. It taught me a lot of life lessons. It definitely has a big impact on my life and who I am."

Her duties on the dairy farm as a kid had her awake by 5 a.m. to get a start on chores like milking the cows, shoveling out the barn and taking care of pigs that she purchased herself.

Running, though, hasn't been a chore.

In high school, she'd typically turn in a 1 1/2-mile trek to the Canadian border and back with teammates. It was part of a workout that turned her into a multi-time state champion.

At the University of New Hampshire, she learned from coaches who helped her become a multi-time All-American.

And now, it's working under the guidance of Mark Coogan, who once coached cross country at Dartmouth and tried to recruit Purrier to the school because he saw a wealth of potential.

Their training routine at the moment includes workouts at higher elevation in Flagstaff, Arizona. It's a regimen that certainly has her on the fast track.

After all, her name just appeared in headlines over the weekend. She was also mentioned in SportsCenter's "Top 10" list.

That happens when you break records. Purrier took the starting line last Saturday like it was any other race.

On the bell lap, she pushed Konstanze Klosterhalfen of Germany before sprinting past her to finish in 4 minutes, 16.85 seconds.

Purrier's immediate reaction: Hands on her head and a brief smile. It didn't dawn on her that she had just bettered the mark of 4:20.5 that Slaney set in 1982.

Later that night, over chicken wings and cheesecake as part of her celebration, the feat began to sink in.

"I was just happy that I won," said Purrier, who was wearing a pair of New Balance's new FuelCell MD-X shoes with technical foam and carbon-fiber plates that are set to be released in March and compliant with World Athletics revamped regulations governing footwear. "It wasn't something I was really even thinking about."

That kind of performance actually has been years in the making and initiated by coaches who took a steady approach to building her into an elite runner. No big increases in training miles until she was ready.

Then, at the world championships in Doha, Qatar, last fall she wound up 11th in the 5,000.

"Once Elle realized she can run with the Jenny Simpsons, or the best runners in the world, her confidence has grown," said Coogan, who coaches Purrier and other elite runners. "She's not intimidated when she walks to the starting line. She's going to race them hard."

Purrier doesn't anticipate the American 1,500-meter mark falling Saturday at the national indoor championships. Not with the race being held at elevation.

Then again, it's a talent-loaded field that's also scheduled to include Shelby Houlihan and Colleen Quigley. Anything could happen.

"I just want to compete well," said Purrier, who's getting married in September.

There will be no world indoor championships this season after World Athletics, the governing body of track and field, recently announced it was postponing the event in Nanjing, China, due to the spread of the the coronavirus. It will be held next season instead.

Purrier's focus after U.S. indoors will be on preparing for the Olympic trials in June and trying to secure a spot for the Tokyo Games.

"In high school, I didn't have any clue about how good I was or my potential or the whole professional running scene," Purrier said. "I definitely didn't picture myself doing this back then."