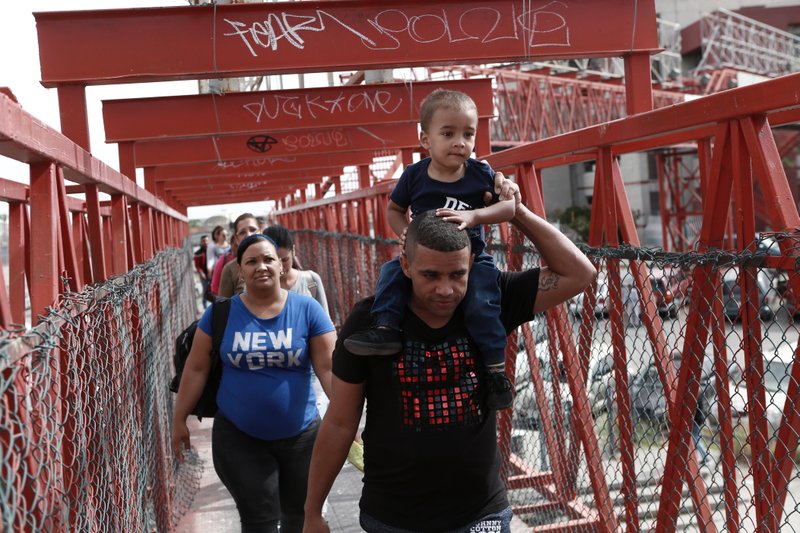 FILE - In this April 29, 2019, file photo, Cuban migrants are escorted in Ciudad Juarez, Mexico, by Mexican immigration officials as they cross the Paso del Norte International bridge to be processed as asylum seekers on the U.S. side of the border. Newly unsealed court documents show that many U.S. holding cells along the Mexican border were less than half-full, or even empty, during an unprecedented surge of asylum-seeking Central American families. The documents cast doubt on the Trump administration's claims that people had to wait in Mexico because there weren't enough resources to accommodate them. (AP Photo/Christian Torres, File)

SAN DIEGO -- Many U.S. holding cells along the Mexican border were less than half-full, even empty, during an unprecedented surge of asylum-seeking families from Central America, newly unsealed court documents show, raising questions about the Trump administration's claims that it had to make people wait in Mexico because it didn't have the means to accommodate them.

Legal advocates for migrants say the figures show that Trump administration officials were making up excuses to keep people from entering the U.S. to apply for asylum.

Customs and Border Protection, in its defense, has long maintained that the number of migrants it can take in at any one time is governed not just by the amount of holding-cell space but by available manpower. And during the surge, the staff was stretched especially thin dealing with priorities deemed more important, such as fighting drug trafficking and inspecting truck cargo.

Also, holding-cell figures do not tell the whole story, a senior official said in the unsealed documents. Some cells are less than full because some migrants must be isolated from others for safety reasons. For example, someone arrested for a crime would be held in a cell alone, as would a family with lice, or migrants with tattoos denoting gang membership.

A federal appeals court unsealed the documents after a request from The Associated Press. They were originally filed as part of a lawsuit that challenges the Trump administration practice of forcing asylum-seekers to wait for weeks or months in dangerous Mexican border cities to request asylum in the United States.

Since 2016, U.S. authorities have adopted a practice known as "metering," under which they accept only a limited number of asylum-seekers per day at official crossings. As a result, huge waiting lists have taken shape at border towns in Mexico. The AP counted about 19,000 people on waiting lists in four cities last July.

Officials have rejected allegations that they are ignoring obligations under U.S. law and international treaties to consider asylum requests, portraying metering as a matter of crowd management.

"It's not turning people away; it's asking them to wait," then-CBP Commissioner Kevin McAleenan said in 2018.

The spread of waiting lists coincided with a series of U.S. measures that have dramatically reduced the flow of asylum-seekers, including one that returns people to Mexico to wait for immigration court hearings in the U.S. Legal advocates say asylum-seekers have ended up falling victim to rape, kidnapping and other crimes in Mexico.

The documents showed wide variations in holding-cell occupancy rates, with a San Diego crossing, the largest along the border, operating near capacity almost every day, and others regularly well below the limit.

On March 14, according to one daily snapshot, 672 people were in custody at all 24 crossings, a 57% occupancy rate. San Diego's San Ysidro port of entry was 89% full, Hidalgo was overcrowded, and El Paso was nearly full. But Laredo was only 40% full, Brownsville was at 35%, and seven crossings, mostly in California, were empty.

Cells at some smaller crossings were regularly empty because authorities directed asylum-seekers to larger cities.

"CBP's own statistics show that the Government has far more capacity to process asylum seekers than it is currently using," attorneys for the Southern Poverty Law Center, Center for Constitutional Rights, American Immigration Council and the law firm Mayer Brown wrote in a filing in federal court in San Diego.

Todd Owen, a senior CBP official overseeing ports of entry, said under oath in a deposition Dec. 13 that the available of holding-cell space fluctuates according to the type of migrants being held and whether they need to be isolated from others.

During the surge, 2,000 CBP inspectors were reassigned to help the Border Patrol process people who entered the country illegally. Some Border Patrol stations were severely overcrowded with asylum-seekers, and several children died in government custody.

The analysis of the government figures was done by Stephanie Leutert, an expert on Mexico and Central America at the University of Texas' Strauss Center for International Security and Law. She studied the data on behalf of attorneys seeking to block the metering policy.