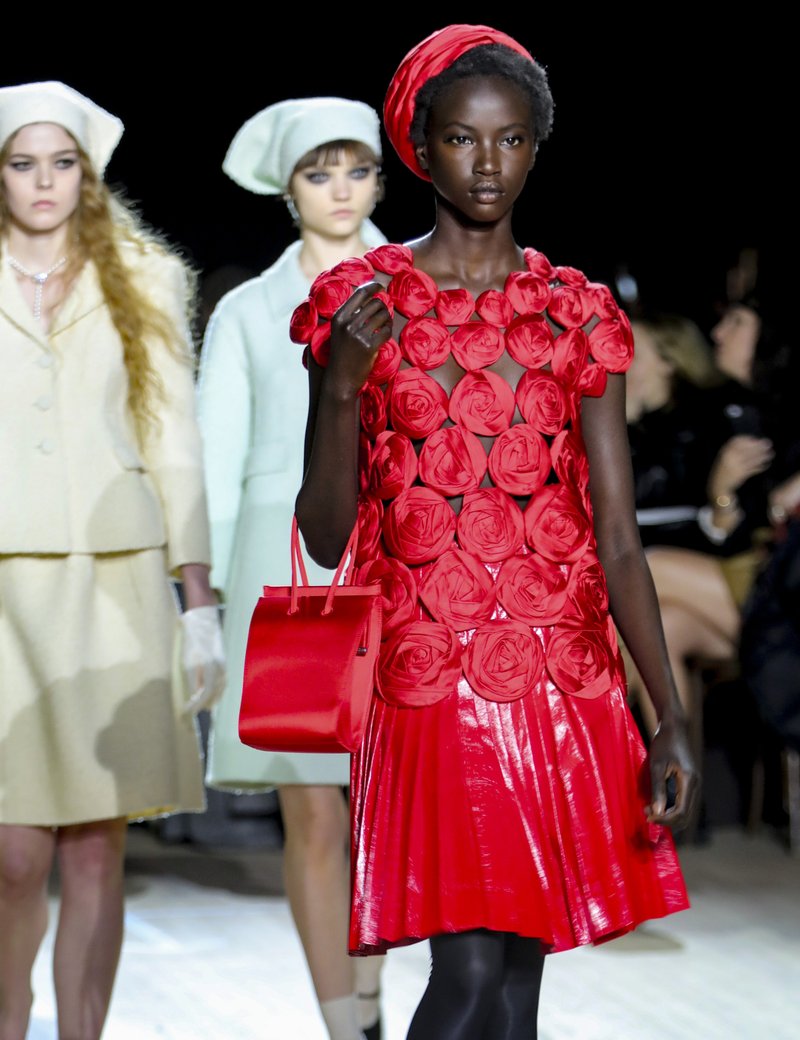 NEW YORK (AP) -- Somehow, he does it almost every time, and designer Marc Jacobs did it yet again: Upped his game, when it came to closing out New York Fashion Week with a jolt of creative energy, vision and sheer panache.

On Wednesday night, in a show that drew raves from across the fashion world, Jacobs' vision included not just models (nearly 90 of them) wearing ingenious, inventive clothes, but more than 50 dancers, choreographed by veteran contemporary dancemaker Karole Armitage. With the dancers and models writhing, marching, even sprinting across the enormous bare wooden floor of the Park Avenue Armory, and the audience just trying to figure out where to look, it's no wonder that many missed the wry surprise Jacobs threw in: a cameo runway appearance by pop star Miley Cyrus, strutting in a black bralette and trousers and elbow-length black gloves, and carrying a zebra-print coat.

Jacobs, who always gets the final time slot of Fashion Week, called this show "Chaos and Form."

In a printed statement given out to guests, he wrote that he'd been inspired by "the fading picture of a disappearing New York that prevails -- now foreign and exotic in its extinction, forever mythical and chic with its beauty, promise, sparkle and grit."

He said he wanted to strike a contrast with his last show, a riot of color and fanciful designs that ended with him twirling and dancing off the stage to "Dream a Little Dream," sung by Mama Cass. "As a departure from last season's flamboyance ... this collection emphasizes restraint, quality of fabrics, make and proportion, valuing simplicity and timelessness," he wrote.

The guests walked into the dark and cavernous armory to find chairs arranged around small round tables, as if in a nightclub.

The show opened with a single spotlight on the bare floor. Then emerged choreographer Armitage, 65, artistic director of New York-based Armitage GONE! Dance who's been called a "punk ballerina," dressed only in black dance clothes. She soon ceded the stage to a phalanx of models, the first group dressed head to toe in one color: bright yellow, or baby pink, or tan, or white. They marched purposefully across the stage. Suddenly a group of dancers appeared, some dressed only in undergarments, with long gloves or heels.

As the models marched back and forth past the audience, the dancers writhed and undulated; it felt like appropriately, like a chaotic urban scene. Gradually the clothes became fancier. Model Gigi Hadid appeared in a white leather suit, white ankle socks and black heels with a red cap. Karlie Kloss, supermodel and "Project Runway" judge, wore a long, sleek white skirt and long-sleeved white top.

One model wore what looked like a tangle of red ribbons on her head. There were '60s-style sequined minidresses and a Jackie Kennedy lookalike, in a long black sequined dress with a cape and elbow-length white gloves. There were two striking dresses -- one red, one white -- that seemed to be made only of silk roses stitched together.

Toward the end of the performance, the dancers moved en masse into the audience, twisting and turning amidst the the tables. The models, meanwhile, gathered in a line across the stage. Suddenly Jacobs appeared behind them, pushing his way through two models to stand and stare at the audience.

And then he did not dance or twirl. He simply stamped his foot, and the lights went out.

This story has been corrected to show that the event happened Wednesday instead of Tuesday.