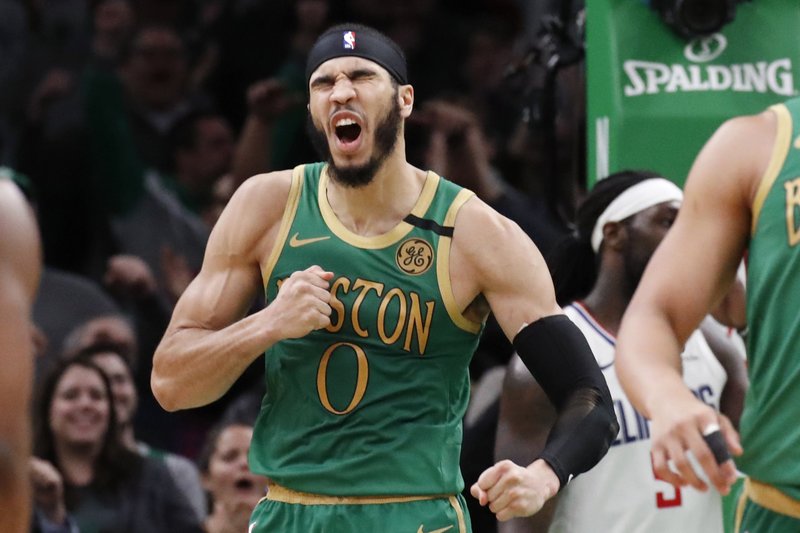 Boston Celtics forward Jayson Tatum (0) celebrates after his basket in the second overtime of Thursday's game against the Los Angeles Clippers in Boston. - Photo by Elise Amendola of The Associated Press

BOSTON -- Jayson Tatum had 39 points and the Boston Celtics pulled away from the Los Angeles Clippers in the second overtime to win 141-133 on Thursday night.

The Celtics have won seven straight at home and eight of their last nine overall.

The Clippers played most of the game without Paul George, who left in the second quarter with a left hamstring strain. Lou Williams led Los Angeles with 35 points. Kawhi Leonard had 28 points and 11 rebounds, and Montrezl Harrell finished with 24 points and 13 rebounds.

George played 15 minutes, scoring four points on 2-of-7 shooting before heading to the locker room.

Zion Williamson scored 32 points for New Orleans, his second straight game scoring more than 30, but Gallinari's clutch shooting -- he had 11 points in the fourth quarter -- kept the Pelicans at bay.

New Orleans, which trailed by as many as 13 points in the third quarter, rallied behind Williamson's dominant inside play to take several slim leads inside the final six minutes.

But after Lonzo Ball's corner 3 gave the Pelicans a 111-110 lead, Gallinari hit a fall-away in the paint and followed up by rattling in a 3.