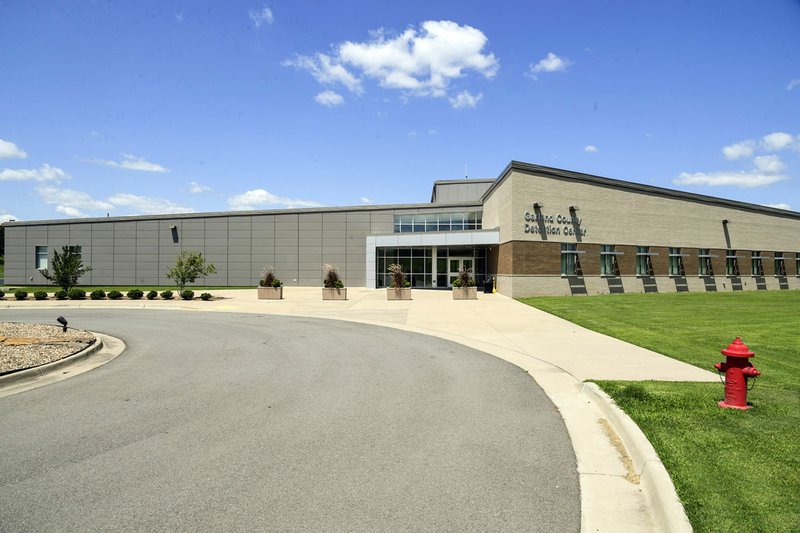 A file photo of the exterior of the Garland County Detention Center taken in July 2019. - File photo by Grace Brown of The Sentinel-Record

Positions created Monday night would enable the Garland County Detention Center to operate at full capacity if a proposal to fund the new personnel advances next week.

The six detention deputy positions the Garland County Quorum Court Human Resources Committee approved would allow male inmates to occupy the 64-bed F unit, bringing the jail to its full operating capacity of 499 beds. More than a dozen women who have worked at the jail since early last year as part of an Arkansas Department of Corrections work-release program occupy the space.

Staffing the F unit would open a sixth housing area for men and potentially lift intake restrictions requiring men to be released before new ones can be booked. The restriction has been in place since September, prompting the jail to manage its population through policies that include releasing inmates prior to the completion of their misdemeanor sentences and issuing citations in lieu of confinement to others.

Chief Deputy of Corrections Steven Elrod told justices of the peace Monday the daily male population averaged 313 as of the end of January. The 307 combined capacity of the five male housing areas often requires inmates to be housed in the booking area, a practice jail officials have said is a violation of inmate rights.

The opening of a second housing area for women in November lifted booking restrictions that had been in place for women since February 2019.

Elrod said the jail held 410 people Monday. About 30 were awaiting transfer to state facilities or serving parole or probation sanctions for the state, he said. The sheriff's department said the jail holds inmates on behalf of federal agencies or other nonstate jurisdictions only in rare instances.

The county sends some inmates awaiting transfer to state facilities to county jails with lower operating costs than the Garland County facility, the sheriff's department told the committee. The $30 a day the state pays county and city lockups to hold its inmates doesn't cover the $60 to $65 a day it costs the county to house someone.

Several JPs questioned if the inmate population has grown faster than projections that helped determine the size of the jail prior to its June 2015 opening. The projections, which were revisited in a consultant's report presented to the county last March, forecast a population range of 294 to 364 by 2020.

"It's filled up a lot faster than anyone has anticipated," County Judge Darryl Mahoney told the committee. "You can look at the negative side and say crime is up. I don't think it is. I think we're just getting more people arrested and putting them in jail."

Inmates booked on charges of failure to appear in court represent a large portion of the jail roster. The 2019 consultant's report said one-third of all people booked in 2018 had a warrant. Almost 80% were issued for failing to appear in court.

Jail officials have said 80% of the population is awaiting trial, with many of them charged with felony offenses.

"Hopefully, before we get to the point of having to think about opening a new pod we'll have some reforms of some type that will help us expedite the process through the courts and get the jail some relief out there," Mahoney, referring to the possibility of building a ninth housing area, told the committee.

County officials said in late 2018 and throughout 2019 that high staff turnover made an operational expansion impractical. They acknowledged the jail fund's roughly $5 million balance could absorb a payroll expansion but were concerned about staffing the positions.

The consultant's report noted 19 detention deputies resigned in 2018, including 11 who left within six months of being hired. Fifty-eight left from 2016 to 2018, including 47 who resigned. Jail officials have said recruitment and retention have improved since then.

Greater parity in pay between detention and patrol deputies the quorum court created last summer, along with longevity pay that vests during the first and second employment anniversaries for certified jailers, has been credited for improved retention. Sheriff Mike McCormick told the committee Monday that all of the jail fund's 102 budgeted positions are staffed.

The quorum court's Finance Committee will consider funding proposals for the six new positions next week. Starting salary for a detention deputy is $34,892, according to information provided by the county.