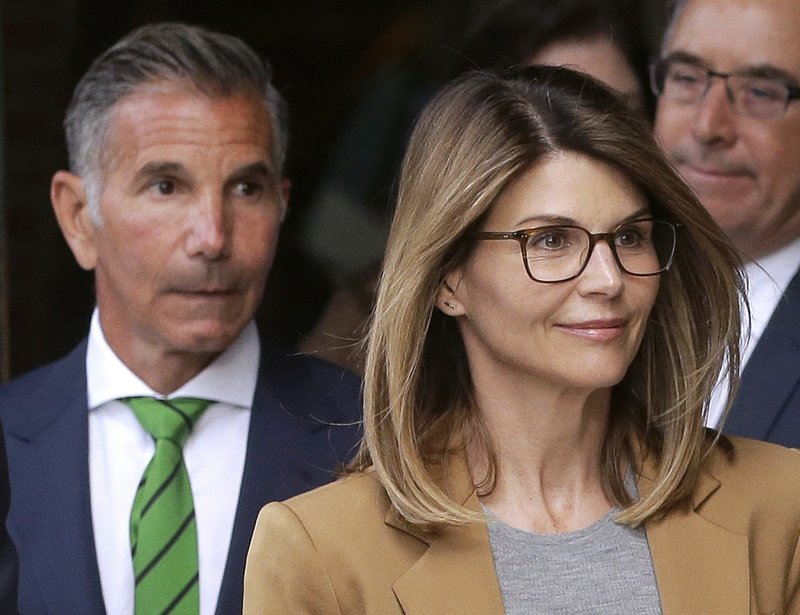 BOSTON -- TV actress Lori Loughlin and her fashion designer husband, Mossimo Giannulli, will go on trial in October on charges that they bribed their daughters' way into the University of Southern California, a federal judge said Thursday.

The judge set the trial date a day after defense attorneys claimed that new evidence would exonerate the couple of charges in the college admissions bribery scheme that has embroiled prestigious universities across the country.

The famous couple will be tried starting Oct.5 in Boston federal court alongside six other prominent parents accused of rigging the college admissions process. Seven others still fighting the charges will go to trial in January 2021, U.S. District Judge Nathaniel Gorton said.

Loughlin, who played Aunt Becky on the sitcom "Full House," and Giannulli are accused of paying $500,000 to get their daughters into USC as recruits to the rowing team, though neither of them was a rower. Authorities say Loughlin and Giannulli helped create fake athletic profiles for the teens by sending the consultant at the center of the scheme, Rick Singer, photos of their teens posing on rowing machines.

The money was funneled through a sham charity operated by Singer, who has pleaded guilty to orchestrating the scheme, authorities say.

Loughlin and Giannulli's lawyers had urged the judge to delay the setting of the trial dates in light of new evidence they received from prosecutors this week. They say this evidence bolsters the couple's claim that they believed their payments were legitimate donations, not bribes.

But the judge said the cases need to be resolved expeditiously and instructed defense attorneys to file any motions to dismiss the case by March 13.

Loughlin and Giannulli's attorneys said in a filing late Wednesday that prosecutors provided them with notes from Singer's iPhone. Singer says in the notes that FBI agents yelled at him and told him to lie to get parents to say things in recorded phone calls that could be used against them.

The lawyers also say Singer's notes indicate that FBI agents told him to lie by saying he told parents who participated in the so-called "side door" scheme that the payments were bribes, not legitimate donations.

"Loud and abrasive call with agents. They continue to ask me to tell a fib and not restate what I told my clients as to where the money was going -- to the program and not the coach and that it was a donation and they want it to be a payment," Singer wrote, according to the filing.

Singer's notes weren't given to the defense until this week because the government believed they were privileged and didn't review them further after discovering them in October 2018, prosecutors say.

Sean Berkowtiz, a lawyer for the couple, said in a court filing on Thursday that prosecutors' explanation for not handing over the evidence sooner is "bogus." He accused the government of "egregious prosecutorial misconduct."

"The fact that someone made a donation to USC with the goal of getting their children into USC is not a crime," BJ Trach, another attorney for Loughlin, told the judge.

Assistant U.S. Attorney Eric Rosen told the judge that it doesn't matter whether Singer called the payments bribes or donations, because it was still an illegal quid pro quo.

"Just because it was called a donation doesn't make it legitimate," Rosen said.