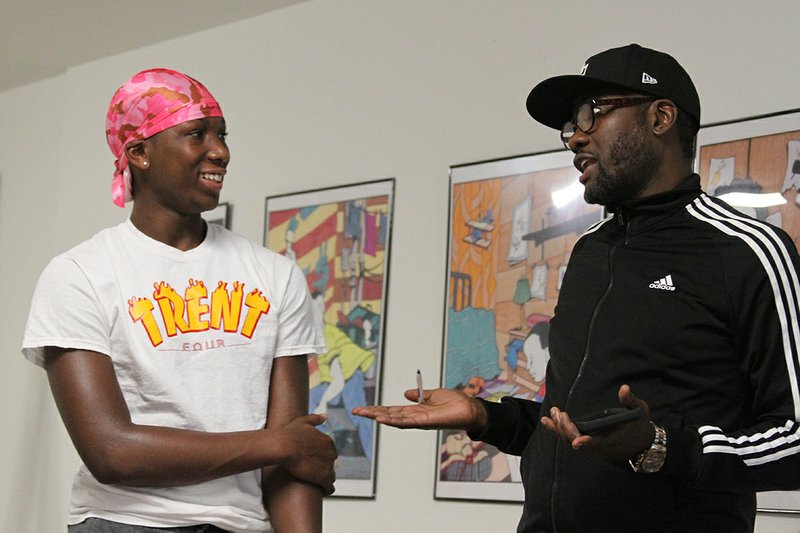 Cutwell 4 Kids is starting the new year with poetry classes taught by Marcus Montgomery, achieving a long-term goal as the program enters its seventh year.

By starting classes in January, C4K founder Anthony Tidwell is finally offering year-round classes to Hot Springs youths. C4K classes have typically started at the end of April or beginning of May.

"Man, it's good," Tidwell said about finally achieving that goal. "It's like, wow, it's here," he added.

This will be the second year that Montgomery has taught poetry classes for C4K. "The kids wanted more," Tidwell said.

Seeing Clayton "come out of his shell," Tidwell said, was good. Tidwell also said that poetry is a way for people to healthily express themselves.

While Montgomery will lead the classes, Erica Hobbs will also be in attendance at as many classes as she can to help Montgomery.

"Poetry is a great way to be able to explain one's self," Hobbs said. "I've always loved poetry and I think it's great for young people to learn about it," she added.

On Friday, Jan. 31 -- which happens to be National Inspire Your Heart with Art Day -- Montgomery will host an event called "Poetic Justus" at the C4K studio where he will read his poetry. Tidwell said that at this event, some of the students will also get to showcase their work. Admission to "Poetic Justice" will be $20.

C4K started offering poetry classes because Tidwell thought poetry would be a good addition to the program. When C4K started, it only offered painting classes by Tidwell, who is an artist. Since then, he has sought out artists in other mediums to help teach the kids in the program.

While dates are not set yet, Tidwell said that he already has a second class in the works for the year, to teach the students how to play drums. Tidwell also said that he is on the look for a piano teacher as the Hot Springs Area Cultural Alliance recently donated a piano to the program.

While expanding the program has been Tidwell's goal, he said that it is hard for him to hand off the teaching to others. "It's hard to let go when you're so used to doing everything," he said. Tidwell said that the program has grown so much over the last six years that it wouldn't be doing the children justice for him to attempt to teach every class.

Helping teach the classes in the program are numerous volunteers, several of which are former C4K students. These include Rayshawn McNary, James Avery, Mary Taylor and 12-year-old Kaziah Olive. Seeing these youngsters come back and help other kids, Tidwell said it makes him "know it's needed."

"If they thought it was nothing, they wouldn't come back. It shows the program has value," he said.