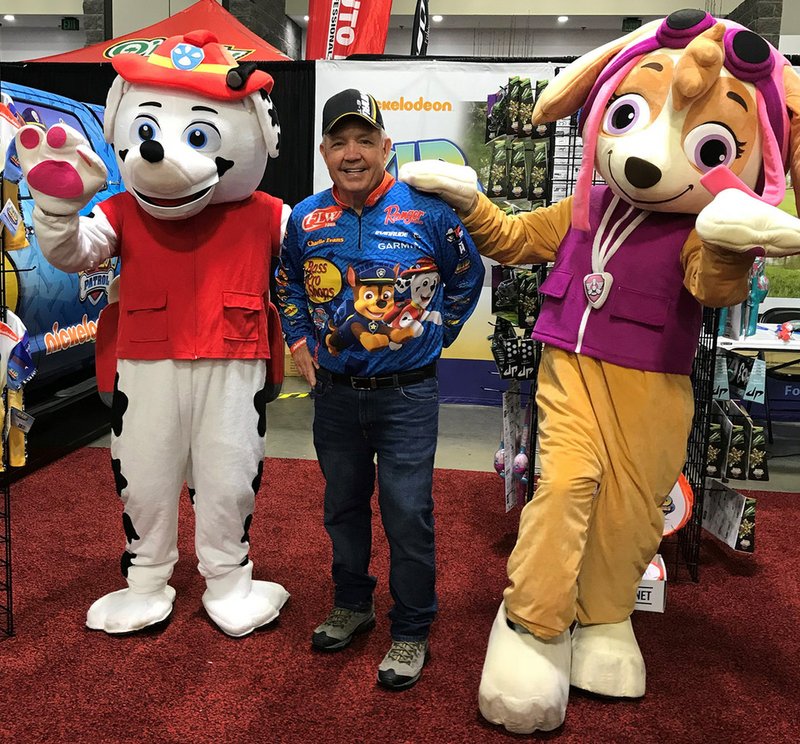 Marshall, left, is a dalmatian and Skye, right, is a cockapoo. They are two of eight pups that make up the "PAW Patrol" and are pictured with Charlie Evans in this promotional photo provided by Visit Hot Springs. - Submitted photo

The First Ever 17th Annual World's Shortest St. Patrick's Day Parade will have three new additions to its lineup this year, according to Visit Hot Springs, that appeal to widely varying age groups.

Visit Hot Springs CEO Steve Arrison said there is "something for everyone" at the St. Patrick's Day Parade, and the addition of two 'PAW Patrol' characters provides a "wide appeal to a different age group."

"We've sponsored Charlie (Evans) for many years and he is sponsored by 'PAW Patrol,'" Arrison said. "We've always wanted Charlie in the parade. He's been a long-term fisherman, he's well known, he has a fishing background and we're a fishing community."

He said they are excited to have these new additions and to see two "PAW Patrol" characters in costume on Bridge Street at the parade on March 17.

According to the release, Evans has been a competitive angler since 1971, and aside from being the former FLW Outdoors president and CEO, he has also hosted the "FLW Outdoors" television show on Versus Country.

"After leaving FLW Outdoors in 2010 Evans started his second career as a professional angler. Evans was inducted into the Freshwater Hall of Fame in 2013," the release said. "His Bass Pro Shops/'PAW Patrol' tournament rig, which will be in the St. Patrick's Day Parade, is the most photographed boat and tow vehicle in the history of the sport."

The parade festivities will begin March 16 with a free Blues Traveler concert on Bridge Street at 8 p.m.

On March 17 the day will begin at 3 p.m. with the opening of O'Kelley's Pop-up Pub. There will be a Blarney Stone Kissing Contest and an appearance by Dallas Cowboy Cheerleaders -- all on Bridge Street -- before the parade begins at 6:30 p.m.

The parade will feature actor and Comedian Cheech Marin as celebrity grand marshal, and actor Danny Trejo as the official parade starter. St. Louis Cardinal mascot Fredbird will also be in attendance. The parade will consist of 40 "unique" floats.

After the parade, Foghat will perform at 8 p.m.