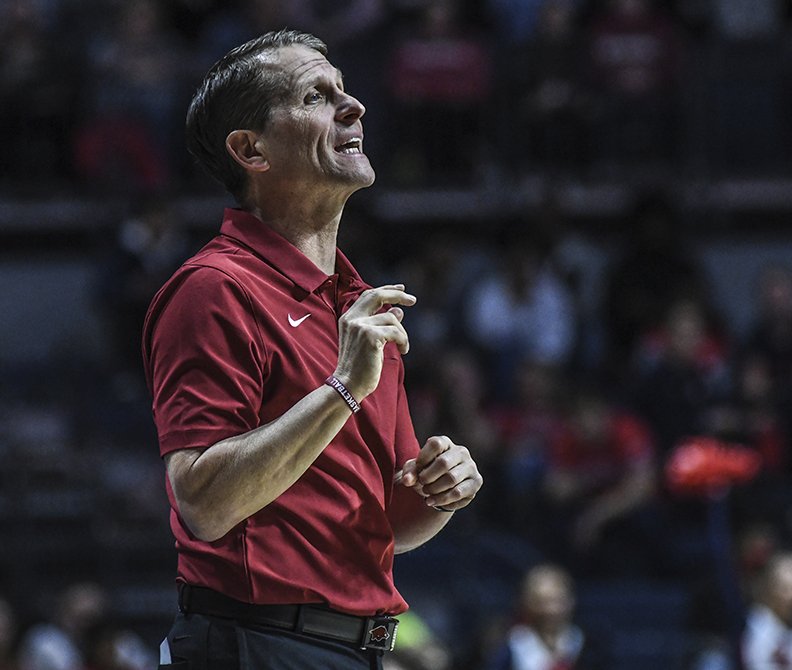 Arkansas Razorback fans enjoy beating Ole Miss in any sport and vice versa, something ingrained in the spirit of people on both sides of the Mississippi River.

University of Arkansas football fans once kept score on whether their coaches could beat the Rebels (Frank Broyles and Jack Crowe could not; Lou Holtz and Bret Bielema -- Ken Hatfield and Houston Nutt, too -- fared much better). It's only one game in the standings and seldom wields championship implications, but bragging rights are enormous whenever it's Arkansas vs. Ole Miss.

Even so, the border war between the schools provided a minor subplot when the Hogs played the Rebels in men's basketball Saturday night at the Pavilion in Oxford, Miss. Eric Musselman's first Southeastern Conference road victory is significant for reasons other than the opponent's name, mainly because it showed again the resilience of these Razorbacks anywhere.

Arkansas' 13-2 record, 2-1 in the SEC, brings to mind a quote by then-Mississippi State football coach Jackie Sherrill after a 1995 game in Little Rock. On the last splashy day for Danny Ford's best Razorback team, the Hogs clinched the SEC Western Division title after falling behind the Bulldogs early.

"Are they the best team in the league? No," Sherrill said. "Are they playing the best football? Yes."

Watching Musselman's team night after night, one feels that these Razorbacks, though outplayed badly in stretches, will be competitive at the end and win more often than not. That formula has worked on the road against Georgia Tech (overtime), Indiana and Ole Miss. Even in defeat, admiration grew for the Hogs after a near-miss at LSU on a night Musselman's smallish team was outrebounded 53-24.

The question now is how Arkansas will hold up at home in upcoming games against the SEC's only nationally ranked teams.

First-year college coach and ex-NBA player Jerry Stackhouse, a former North Carolina Tar Heel, brings his first Vanderbilt team to Bud Walton Arena Wednesday night in what could be a trap game for the Hogs. That's because Arkansas fans have circled Jan. 18 on their calendar, the date that Kentucky makes its biennial visit to Fayetteville. Auburn, a Final Four unit last season and currently 15-0, follows UK into town Feb. 4.

Arkansas has lost seven in a row to Kentucky since Michael Qualls' put-back dunk with 0.2 seconds left in overtime in 2014. That Razorback team later won a late-season game at Rupp Arena, also in OT. Anderson, who coached at Arkansas under Nolan Richardson when the Kentucky game was the biggest on the Hogs' schedule, first with Rick Pitino on the UK bench and later with Tubby Smith and John Calipari coaching the Big Blue, became testy with a reporter after the Wildcats' 70-66 February 2019 escape in Lexington.

"Coming in on a five-game losing streak, coming into one of the toughest places in the country, what were you all trying to get out of a game like this?" said a Kentucky reporter, needing and getting a history lesson from Anderson.

"A win," he answered. "Were you really serious about that?"

One sees Kentucky manhandling Arkansas in the paint and the class of the Wildcats seeing them through late in a close game. Kentucky, like Duke and Kansas and some others, is a national team and plays on college basketball's biggest stages. Though Calipari turns over his roster every year with future NBA players, a Calipari-coached team usually plays stifling defense, its greatness often measured by how well it shoots from outside.

Kentucky's current squad lost at home to Evansville when ranked No. 1 but toppled preseason No. 1 Michigan State on opening night and won the annual grudge match with Louisville, another former top-ranked team. Like one says of a stakes-caliber horse leaving its home base for a big race out of town, the Wildcats have seen the track.

Dick Vitale, ESPN's basketball eminence, is said to be coming for the sold-out Kentucky game, which his network airs. Though some consider him loquacious, "Dickie V," at 80, is passionate as ever about college hoops and his opinion carries weight. An "awesome baby" or two from Vitale about Isaiah Joe surely would increase the Razorback sophomore's national visibility and might move Musselman up there with Calipari and Duke's Mike Krzyzewski on the announcer's list of "Michelangelo" coaches.

An SEC Network audience Saturday night watched Arkansas rally from 11 down in the second half against Ole Miss. Joe matched his career-high in scoring with 34 points, hitting seven triples, and had 2 steals in the last 2:20, once leaving his defender and breaking on the ball for a coast-to-coast drive. Although playing at a feverish pace, Musselman's style, the Razorbacks looked fresh at the end, retaining their leg strength and making clutch free throws.

Breein Tyree kept Ole Miss in it until the end, his layup with 18 ticks left on the clock for a team-high 27 points making it 74-72. Jimmy Whitt Jr., a graduate senior in his second tour with the Razorbacks, drained two from the line with eight seconds left to sew up the victory and reward bettors who gave favored Arkansas and 2 points.

We'll learn soon enough how Musselman's team, ranked 11th of 14 in the SEC preseason poll, holds up in the crucible of conference play. An NCAA-tournament bid would be asking a lot of a team that many thought had only an NIT ceiling. But for the first time in years, the basketball Hogs are packing Walton Arena and as Eddie Sutton taught us with the Triplets, the games get bigger when you're winning.

Is Arkansas the SEC's best team? Probably not. But for now it's enough that no SEC team is playing harder or seems to be enjoying it more.