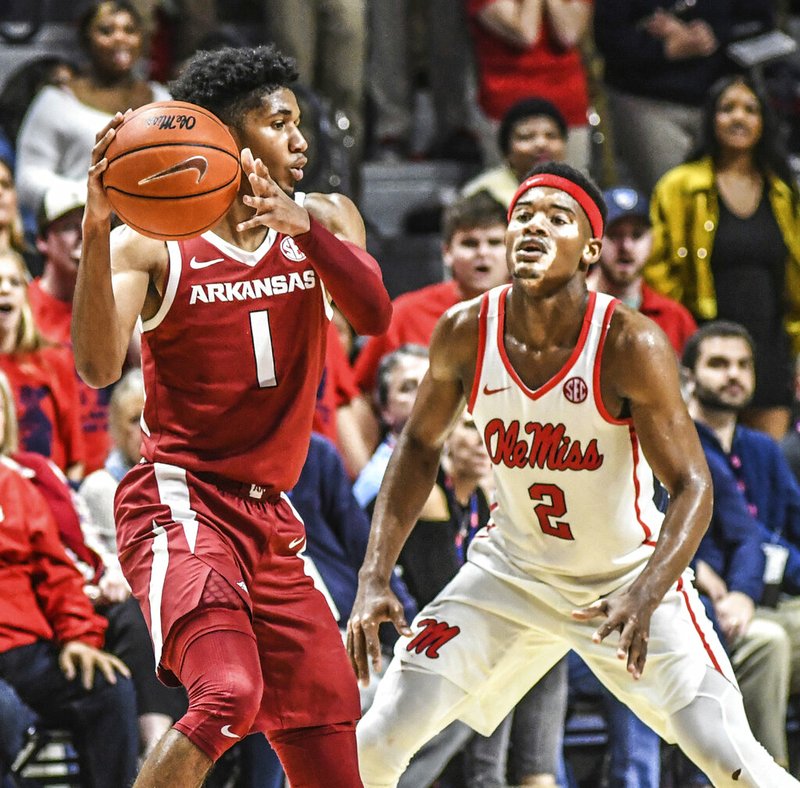 Arkansas guard Isaiah Joe (1) is defended by Ole Miss guard Devontae Shuler (2) during Saturday's game in Oxford, Miss. - Photo by Bruce Newman of The Oxford Eagle via The Associated Press

OXFORD, Miss. -- The University of Arkansas basketball team already had suffered one excruciating Southeastern Conference road loss during the week.

The Razorbacks were determined not to make it two.

So Arkansas rallied to win 76-72 at Ole Miss on Saturday night at The Pavilion after losing 79-77 at LSU on Wednesday night.

"The loss at LSU left a real sour taste in our mouths," said Arkansas sophomore guard Isaiah Joe, who matched his career high with 34 points against the Rebels. "We could not lose two in a row.

"We knew once we were down, we were going to need to come back some way, somehow," Joe said. "And we figured it out."

The Razorbacks figured it out by making sure Joe the ball in his hands -- a lot.

"It just so happened to be Zay. He came down and hit those big shots, and that got us going --defensively, offensively."

The Razorbacks scored 49 points in the second half after trailing 33-27 at halftime.

"In the second half, I thought we played with some really good pace," Arkansas coach Eric Musselman said. "And Isaiah put on a show shooting-wise."

"Once you get in a rhythm, you start to find yourself," Joe said. "My teammates were able to find me. Ball screens worked really well, so we stuck with it."

The Razorbacks played three true road non-conference road games when they won 62-61 in overtime at Georgia Tech, lost 86-79 in overtime at Western Kentucky and won 71-64 at Indiana.

"I think playing the road games really helped us," Musselman said. "It was a challenge for our team, and I thought we stepped up. You win two out of those three, and that's pretty good.

"Look, LSU's a really good team, too. We couldn't have rebounded the ball any worse in that game, and we still had a chance to win that one."

LSU out-rebounded Arkansas 53-24 and had a 26-0 advantage in second-chance points, but the Tigers needed two blocked shots by Charles Manning in the final seconds -- on 3-point attempts by Joe and sophomore guard Desi Sills -- to hold on for the victory.

Arkansas gave itself a chance to win by outscoring LSU 15-10 in points off turnovers, hitting 17 of 18 free throws and hitting 8 of 25 3-pointers compared to 4 of 15 by the Tigers.

"Our job was to go 2-0 this week, but we came up short against LSU," said Arkansas junior guard Mason Jones, who had 13 points, a career-high 9 assists, 6 rebounds and 3 steals against Ole Miss. "We knew we wanted to come here and win. It didn't look pretty, but we came out with a W. We have to stay greedy."

Joe and Whitt each hit 2 of 2 free throws in the final 17.2 seconds to help the Razorbacks hang on to beat the Rebels.

"Zay's a big-time player," Whitt said. "That's the kind of guy we want at there free throw line. I stepped up there and had my opportunity. I feel like as one of the older guys -- as a grad -- I've got to come through for the team. I've got to bring something to the table.

"Being able to hit big-time free throws, that's what puts you over the hump on the road."

Arkansas jumped out to a 10-2 before falling behind by 11 points.

"It's conference play. Things are going to happen," Whitt said. "You may get down, you may be up. You just need to keep playing for 40 minutes.

"In a 40-minute basketball game you never know what can happen."

After playing two of the last seven games in Bud Walton Arena, the Razorbacks will have back-to-back home games against Vanderbilt (8-7, 0-2) on Wednesday night and Kentucky (12-3, 3-0) on Saturday.

"We can't wait to get home," Musselman said. "I hope we have a great crowd Wednesday. The team's effort has earned the respect of the state."

The Razorbacks beat Texas A&M 69-59 in the SEC opener on Jan. 4 in Walton Arena before sellout crowd announced at 19,200.

"The last time we were in there it was rocking, and we hope it's rocking on Wednesday." Musselman said. "We've just got to get ready for Vanderbilt."

"It feels good to be able to refresh our bodies and stay at home, not have to go on the road," Jones said. "Be able to play in front of our amazing crowd."