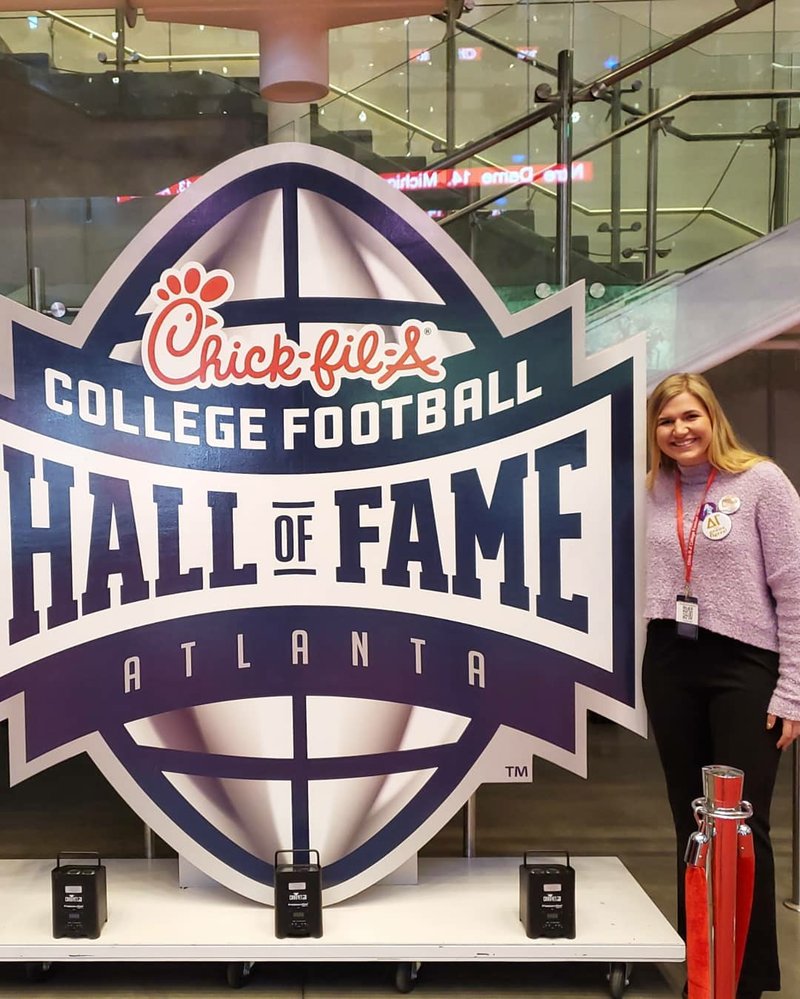 Lakeside alumna Miller Dickerson was selected as part of the Taco Bell Live Mas Student Section Contest to represent LSU at the College Football Award Show on Dec. 12, 2019, at the Chick-Fil-A College Football Hall of Fame in Atlanta. Dickerson will also be attending the FBS National Championship Game in New Orleans as part of the contest. - Photo submitted, courtesy of Miller Dickerson

Lakeside graduate Miller Dickerson may be only one semester removed from high school, but she has already won a nationwide contest that has taken her to the College Football Awards Show in Atlanta and has earned her and 500 of her fellow LSU students a trip to the FBS National Championship Game today in New Orleans.

"It honestly has made the first semester of my freshman year," Dickerson said. "I don't know how I'm going to top that."

Dickerson, who claims to be no more active on social media than the average college freshman, heard about the Taco Bell Live Mas Student Section contest.

"Anyone can do it; you just use the hashtag on any pictures that you have [that are] football-related," she explained. "Like on game day, I used #LiveMasStudentSectionContest just at the end of my post about the game or tailgating or whatever we did. I guess that's how they found my page, and then contacted me from that.

According to the contest website, each week of the 13 week season, "a group of college football experts from around the country" would select one student section to be the Student Section of the Week. These 13 schools were then narrowed to four -- Clemson, LSU, Utah and Penn State.

Representatives were chosen from the four schools to attend the College Football Awards Show in Atlanta on Dec. 12, 2019, and Dickerson was the representative from LSU.

"Basically, they invited me to go on behalf of LSU, and I got to bring one of my classmates with me," she explained, noting that she brought her friend Georgie McBride. "They flew us out to Atlanta, all expenses paid, and we got to go to the award ceremony. ... I got an interview with Marty Smith from ESPN."

While meeting your college's football players might not seem unusual for most, most students at LSU do not get the chance to interact with the football team.

"Football is huge at LSU, and I know people often talk about the culture out there -- it's insane," Dickerson said. "You don't meet the football players on campus; it just doesn't really happen. They're kind of like celebrities. ... I met Joe Burrow, one of our wide receivers Ja'Marr Chase, and I met our star safety Grant Delpit, and actually got to kind of hang out with them and talk to them for a while. It was super cool and just unlike any other experience. I mean, I don't know any other college students that are getting to do that on my campus."

While Dickerson and LSU lost out to Penn State for the Student Section of the Year award, since the Tigers reached the national championship game, Taco Bell is providing tickets for Dickerson and her fellow students to attend the game.

"So at the game they're going to have a student section that Taco Bell has sponsored, where myself and my classmates will be sitting," she said. "And they're having a bunch of pregame festivities for us. I've already been in contact with the Taco Bell representative, and she's gonna have me on their social media for that day, promoting the tailgating for the game."

Football has always been a big deal for Dickerson growing up. As the oldest child of two Ole Miss grads, "every Saturday we're watching college football."

The former power forward for the Lady Rams was also a huge fan of the sport while in high school as well.

"At Lakeside, I went to every single home game, and I went to some of the away, even though we weren't very good when I was at school there," she continued. "But I was pretty invested in it. I mean, I played sports myself, so I've always loved sports."

Dickerson is also active on campus. The bioengineering major is a member of the Delta Gamma sorority and in the Ogden Honors College.

She is the daughter of Dan and Jean Claire Dickerson, and she has two sisters -- Maggie, a sophomore at Lakeside, and Molly, a seventh-grader.