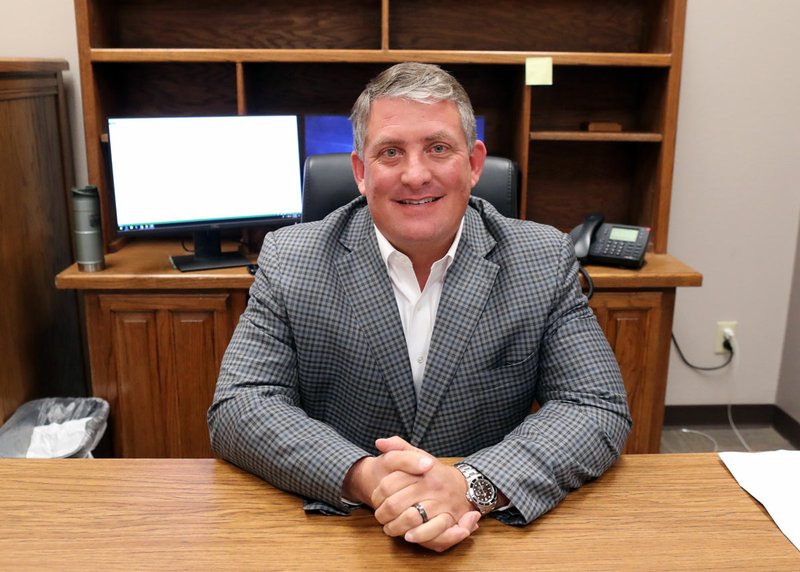 Kevin Brownlee is Hot Springs' new deputy city manager. He started Jan. 6 after serving as chief executive of the South Central Arkansas Electric Cooperative for 10 years. - Photo by Richard Rasmussen of The Sentinel-Record

Kevin Brownlee has assumed the post the city had been looking to fill in its organizational chart since early last year, becoming Hot Springs' new deputy city manager.

Jan. 6 was the first day on the job for the former chief executive of the South Central Arkansas Electric Cooperative in Arkadelphia. The hire gives City Manager Bill Burrough two chief operating officers to help him oversee the roughly 600 employees and more than $100 million budget demanded by an operation that runs 24 hours a day, 365 days a year.

"It was through really a nationwide search with myself, (Human Resources Director) Minnie Lenox, Lance Spicer and (City Attorney) Brian Albright serving on an interview committee," Burrough, explaining how Brownlee was selected, told the Hot Springs Board of Directors at its Jan. 7 business meeting. "I'm very pleased to have Kevin on board. We've spent a lot of time together the last couple of days. I'm really looking forward to transitioning some of the departments that will be reporting directly to Kevin."

Six departments fall under Brownlee's line of authority, including utilities. He will oversee the $100 million Lake Ouachita water supply project, a large scale endeavor that will feature a more than 2,000-foot long micro tunnel underneath Blakely Mountain, a 17-mile raw water line that will cross Lake Hamilton and a 15 million gallon a day treatment plant off of Amity Road.

The city hopes to bring its 23.5 million-gallon average day allocation from Lake Ouachita online by 2022.

"This week has been mostly about getting out and meeting some of my coworkers and setting up my calendar and my schedule for the coming weeks, which is quite full," said Brownlee, who moved to Arkansas in 2009 and has lived in Hot Springs the last five years, of his first week on the job.

"I have a lot of departments, and a lot of coworkers," he said. "Getting to know those people and making those contacts and getting up to speed on some of the projects is a pretty good task."

"I moved here five years ago because I wanted to live here," Brownlee, noting that he had been commuting to his job in Arkadelphia, said. "Just the quality of life here and the amenities and school systems were so excellent. When you couple that with the lake and the things you can do here, it's a very attractive place.

"I hope to be able to help the city with its projects and all my departments to meet and exceed the expectations of our citizens and visitors."

Brownlee and his wife, Kathy, have two children, Bryce and Meredith.