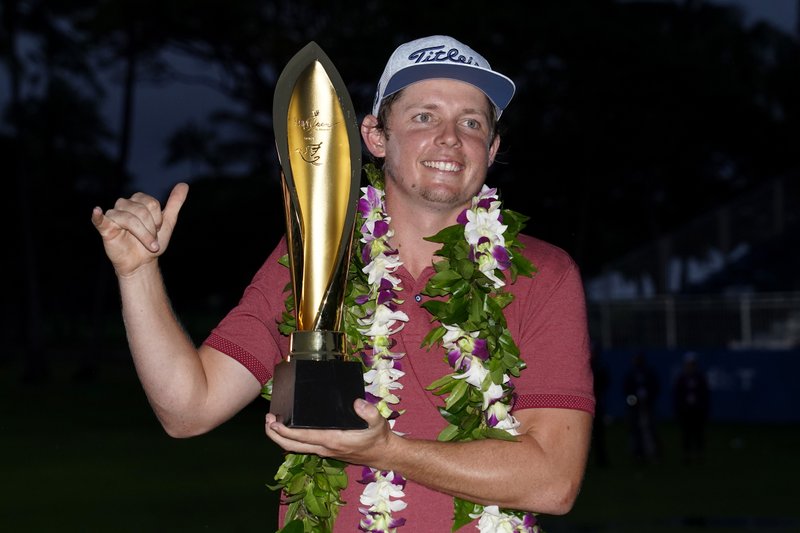 Cameron Smith holds the champions trophy after the final round of the Sony Open Sunday at Waialae Country Club in Honolulu. - Photo by Matt York of The Associated Press

HONOLULU -- Two weeks in Hawai'i brought rain, unusually strong wind, playoffs and two players who thought victory was out of reach until the winner's lei was draped around their necks.

Cameron Smith was the latest Sunday at the Sony Open.

He might have been even more surprised than Justin Thomas, who got a second chance when he won a playoff at Kapalua.

"Two or three holes left, I really didn't think there was much of a shot," Smith said after his playoff victory over Brendan Steele on rain-soaked Waialae Country Club. "I knew I had to play some good golf. It just kind of all fell into place."

Smith was 4-over par just two holes into the tournament Thursday, and his focus turned to making birdies that would give him a chance to salvage his round and raise money for the wildfires in his native Australia. Smith and Marc Leishman had pledged $500 for every birdie to help raise money.

He twice pulled within shot of the lead at various points Sunday, but it looked like a lost cause when Steele had a two-shot lead with two holes to play.

"I thought I had to birdie 17 and then do something really good on 18," Smith said. "You never know what can happen."

Just about everything did in the final hour, which is about how long it took to play the last two holes. It rained every day since Tuesday, and the rain was so steady on Sunday the PGA Tour moved the hole location from its traditional spot to higher ground, and the green still had to be rolled with sponges between groups.

Steele missed a 6-foot par putt on the 17th, and his lead was down to one shot.

In the group ahead, Simpson's wedge into the par-5 18th skipped off sheen of water and settled 15 feet behind the hole for a birdie attempt he narrowly missed. He shot 67.

Palmer never even had that opportunity. His fairway metal from a bunker sailed so far right that he hit the metal railing atop a massive video screen, sailed well to the right of the corporate tents and was lost, presumably in a back yard. He had to go back to the bunker and made bogey for a 68.

Steele was trying to figure out what happened to Palmer, and then he did the opposite. He pulled a 2-iron so wildly to the left that it was near the ropes lining the 10th fairway. After a free drop, he hit wedge off the muddy lie to 30 feet, taking a reasonable birdie putt out of the equation. His par gave him a 71 and opened the way for Smith.

The 26-year-old Australian delivered with a long bunker over the forming puddles to 8 feet, and Smith poured it in for a 68 to force the second straight playoff in Hawai'i, and the third straight dating to end of last year.

Steele, who led by as many as three shots when he holed a bunker shot for birdie on the 11th, made no excuses for his approach to the 18th.

Equally hard was the playoff hole, which was No. 10 because of the water on the 18th green. Steele again looked to have the advantage with a great drive that left him 88 yards away in the fairway, with Smith over by the trees in the right rough. Smith chased a shot low and onto the green to 10 feet.

Steele, so used to having a blast of wind in his face on that hole, tried to get a shot to the back tier toward the pin, because anything less would spin back to the lower tier. Instead, it sailed over the green, he chipped some 15 feet by the hole and missed his par putt.

And there was Smith, who an hour or so earlier had stood on the 17th tee wondering how he could win from two shots behind, and now was two putts and 10 feet away from a PGA Tour victory he could call his own.

He twice won the Australian PGA Championship. He shared a team title with Jonas Blixt three years ago in New Orleans.

"My first individual win on the PGA Tour, it's definitely going to be one I never forget," Smith said. "Given the conditions and how tough it was, I'll draw back on this in the future."

For the week, Smith made 21 birdies for $10,500 toward the Australian fires relief fund, along with other contributions from the PGA Tour and $125,000 from the International team at the Presidents Cup.

It was personal for Smith. His uncle lives in New South Wales and lost everything but a shed.

"We're a tight-knit family and it hit everyone pretty hard," he said. "It's good to do something good, and hopefully puts a smile on their face."