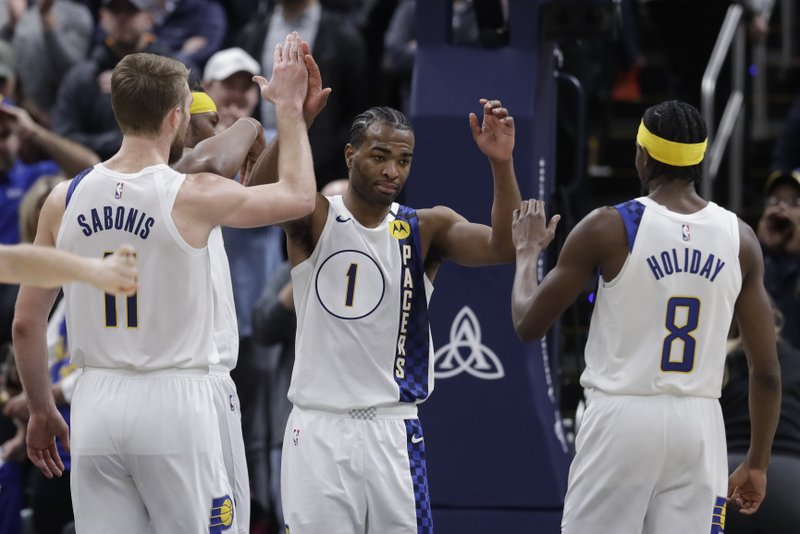 Indiana Pacers' T.J. Warren (1) is congratulated on blocking the shot of Philadelphia 76ers' Tobias Harris by Domantas Sabonis (11) and Justin Holiday (8) during the second half of Monday's game in Indianapolis. Indiana won 101-95. - Photo by Darron Cummings of The Associated Press

INDIANAPOLIS -- T.J. Warren scored 21 points and blocked a late 3-pointer that would have given Philadelphia the lead to help the Indiana Pacers hold on for a 101-95 victory over the 76ers on Monday night.

The Pacers have now beaten the 76ers twice in 14 days, this time after charging back from an 11-point deficit midway through the third quarter. Malcolm Brogdon also had 21 points and added seven rebounds and nine assists.

Ben Simmons had 24 points and 14 rebounds for the 76ers. Josh Richardson added 23 points, 17 in the fourth quarter as Philadelphia fell to 1-2 since losing Joel Embiid with an injured finger on his left hand.

LOS ANGELES -- LeBron James scored 23 of his 31 points in a dominant second half, and Dwight Howard added season highs of 21 points and 15 rebounds in Los Angeles' ninth consecutive victory.

James added eight assists while passing Isiah Thomas for sole possession of eighth place on the NBA's career list. The longtime Cavaliers superstar led a decisive run during the third quarter and poured it on in the fourth for the Lakers, who still haven't lost since Christmas.

Los Angeles won its third straight game without Anthony Davis, who is out with a bruised backside.

Kevin Love had 21 points and 11 rebounds for Cleveland in the third stop of a six-game road stretch. Two days after the Cavs posted a surprising win at powerhouse Denver, they couldn't keep up with a franchise icon who hasn't slowed down since he moved to the West Coast.

MINNEAPOLIS -- Shai Gilgeous-Alexander had 20 points, a career-high 20 rebounds and 10 assists in his first triple-double, leading Oklahoma City over Minnesota.

Gilgeous-Alexander came in averaging 23.7 points in his previous 13 games but did much more than score in this one, also matching his career best in assists.

Danilo Gallinari scored 30 points for the Thunder, who have won 12 of their past 15 games and six of seven on the road. He was 11 for 12 from the free throw line.

Naz Reid scored 20 off the bench for Minnesota, which was still without Karl-Anthony Towns. Reid has scored in double figures in six of the last eight games. Robert Covington scored 18 points.

Enes Kanter had 15 points and nine rebounds, Kemba Walker added 14 points and Marcus Smart had 12 points for Boston, which won its second straight after a season-high three-game losing streak.

Zach LaVine led the Bulls with 30 points, including a couple of highlight dunks. Thaddeus Young added 17 points for Chicago, which has lost seven of eight.

Anthony Tolliver had a season-high 16 points, all in the fourth quarter, and the Blazers snapped a two-game overall losing streak and a four-game skid at the Moda Center. CJ McCollum finished with 27 points.

The Blazers, who led by as many as 17 points in the first half before Charlotte closed the gap and took a third-quarter lead, have won their last six games against the Hornets.

Terry Rozier had 27 points for the Hornets, who were coming off a 100-92 loss at Phoenix the night before.

Gordon finished with 19 points and nine rebounds in his return to Orlando's lineup after missing one game with calf tightness. Nikola Vucevic had 26 points and 15 rebounds, and Evan Fournier scored 25 points.

DETROIT -- Lonzo Ball scored five of his 17 points in overtime and New Orleans beat Detroit in a matchup of injury-depleted teams.

Detroit, which trailed by 16 with 11 minutes to play, tied the game at 100 on Derrick Rose's bank shot with 30 seconds left. E'Twaun Moore missed two short jumpers, giving Detroit the ball with 14 seconds remaining, but Rose missed at the buzzer.

The Pelicans opened overtime with a 9-2 run, including five points from Ball, and Rose had two turnovers in the last 90 seconds.

New Orleans has won three of four and is now 9-4 after a 6-22 start. Jalil Okafor had 25 points and 14 rebounds while Nicolo Melli scored 20 points and Moore had 16.