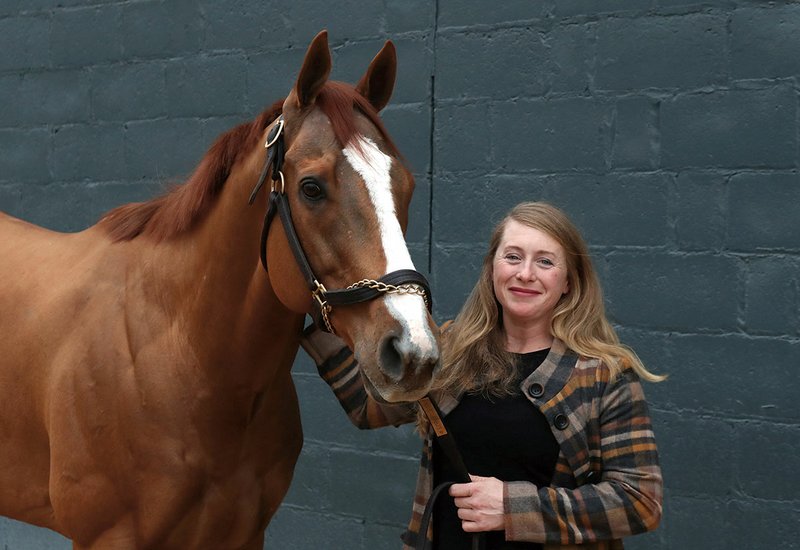 Assistant trainer Laura Moquett in the barn area at Oaklawn Racing Casino Resort Friday with Whitmore, a winner of $2,821,350.00 – Photo by Richard Rasmussen of The Sentinel-Record

Welcome to the world of thoroughbred horse racing. It is fast-paced, challenging, and sometimes even a little bit dangerous. It is everything Laura Moquett loves.

She found herself on the thoroughbred racing scene years ago after happening upon the opportunity in her hometown in Iowa. Although she did not grow up around a track, the sport still found her on the family farm.

"(My sister and I) would train our horses, a paint and quarter horse cross of some sort. We would train every morning and we'd race every afternoon. We would really just get into it and I think it just stuck. It was so much fun to go fast. I just liked it," she said.

As she grew, so did her love of horses and she found herself constantly visiting the stables. The idea of racing horses excited her and soon enough, she started dreaming of finding a way into the world of horse racing. Eventually, that opportunity presented itself.

"It kind of found me. When I was young, there was an old man from my hometown came to the farm that I was riding horses at and asked if anybody wanted to ride racehorses. And of course, I did," Moquett said.

"I did less of school and more of horses until I just decided that I wanted to do this the rest of my life," she said.

Now the assistant trainer for Moquett Racing, she has made her way through the ranks of riding and helped train million-dollar winning thoroughbreds.

Her racing career began on a track in Sioux City, Iowa, where she found no formal training and no other women. In one of the first barns she worked at, women were initially not allowed to help train horses.

"He didn't want girl riders, but he changed his mind. I didn't fall off and I didn't let him run off," Moquett said.

"I think there would be a lot of girls that would change his mind. I was just too hardheaded to leave. So then he responded, 'Well, fine.' and the rest was history," she said.

Unlike most professions, Moquett says she feels there's no formal training when it comes to learning how to work with racehorses.

"(My first time on a racehorse) was interesting because I didn't know how to do it. They didn't really teach me how. They just said like, 'Good luck.'"

"Once I started riding on the track, then people helped and gave out tips. If you survive, then you learn," she said.

For the past 20 years, Moquett said she's been working with and riding horses well enough to earn her keep. However, she said she spent many more years learning all the ins and outs of her duties on horseback and in the backside barns.

"That's the thing about racing, there are no internships. They don't have real schools to learn how to ride racehorses. So you have to do it all while you're being employed," she said.

In 1997, she found herself at Oaklawn where she later met her husband. This was the first track where she encountered other women on horseback.

"There's a shed row community for sure. You may be together 12 to 14 hours a day, depending on how many horses you have in. Everybody gets to know everybody. Those become the people you turn to when you need something and vice versa. It's really nice," she said.

As an assistant trainer, Moquett said she is sort of like a mother in the backside barns, managing not only an entire team of thoroughbreds but 30 or more people as well. If ever a problem in the barns, she knows about it and immediately goes about solving it.

"So the kids would be the horses. Are they eating? What's their temperature? What issue do they have physically or mentally that you can maybe help them with," Moquett said.

"You have to manage your employees, as well. You know, there are multiple lists of feeding supplements, shoeing dates, vaccines, worming, all the things that it takes to care for something. Just like your family, basically," she said.

For the most part, she and her husband have a solid crew that travels with them from track to track. From late fall until May, they live in Hot Springs and race their horses at Oaklawn Park. Once the live racing season concludes, she and her husband leave for Kentucky for the remainder of the spring. Once summer comes about, they leave and head north to Saratoga in New York.

"We are spread out across the country for most of the year, but get to share wonderful experiences together when Ron and I come down to Arkansas for the winter. We really cherish our return to Hot Springs each year for the opportunity it provides us to visit local close friends in town and invite our family down to gather around the table and get back in touch with each other. Having fast horses and winning moments are awesome but, having friends and family to share it with is the real joy! I consider myself lucky to have such a focused partner in life and in my career I'm so glad that I took that job at Oaklawn Park so many years ago," she said

A large portion of her duties as 'barn mom' consist of advocating for her horses. While none of them can verbally communicate with her, Moquett insists that each horse in her barn has their own way of letting her know exactly what is going on.

"It's exciting. Figuring out a horse is maybe the most rewarding thing. You have to think outside the box sometimes. There's always something to figure out. You're never bored," she said.

Each person working in the Moquett barns demonstrates this innate ability to communicate with these massive creatures on a unique level. This line of communication between the horses and their grooms, exercise riders, and trainers seems to be a key element to winning races.

"It seems like people have it or they don't. You can always get stronger. You can always learn techniques, but to have the balance and the ability of forethought to mitigate experiences for a horse is key," Moquett said.

"You have to see what's coming before it comes, anticipate that, and then try to guide your horse and keep it relaxed while guiding it accordingly," she said.

Just like with people, Moquett said she has had her fair share of difficult horse personalities on and off the track. One of her favorite horses, Whitmore a 7-year-old gelding who has won over $2 million racing, was also one of her most difficult to train.

"He was really hard to just deal with every day on any level. Usually, if a horse is good in the stall, they might be bad on the track and vice versa. You come back from the track, and you're like, 'Oh my God. This thing is killing me.' and the groom loves it because it's perfect in the stall," Moquett said.

"But he was different. As soon as you asked him to do anything, if you touched him, he was automatically defensive about it. So trying to figure out why was a challenge," she said.

Once she figured out exactly what Whitmore needed, she met the need and he began winning races in no time. Today, he is one of Moquett racing's most profitable thoroughbreds. As a result, Whitmore also gained a following of his own.

"To see people who have no connection to (the horse) as far as daily activities go, that are so excited to watch him run, it's just really cool. It just brings another group together," she said.

"So you have the group in the barn that is connected to (that horse) and knows (it) and all his little weird ticks and personalities. Then you have a larger group of people that know him and make up this secondary circle. This may be people related to us or know people in the barn that take care of him. Things like that. Then there's this extra circle of just fans that really love (the horse)," she said.

It is no secret the backside barns of Oaklawn is a thriving, close-knit community. For Moquett, thoroughbred horse racing helped turn her passion into profit, implanted her into a strong community that transcends each rack track, and led her to meet the love of her life, Ron Moquett.

"The best thing that's happened to me with racing beside the excitement of competing and winning races at a high level was meeting my husband, Ron. We met at Oaklawn park years ago, both working in the same barn. Through him, I got the experience of having an amazing family with three stepchildren and, so far, three beautiful grandchildren," she said.

As the matriarch of Moquett Racing, Laura witnessed the industry's attitude toward women change first hand and often led the charge. Refusing to take no for an answer, Moquett's life work has set the stage for the next generation of women in thoroughbred horse racing.

"I think women have a lot more sensitivity like I was saying with the 'barn mom' thing. They have a lot more empathy for animals in general. That's just maybe the way we're wired," she said.

"I think girls, as a general rule, have pushed into this industry more and more because people have recognized that we get a lot done, are self-motivated, and just have this softness that horses follow."